In Which Rob Turns 36 Years Old

Today is Rob's birthday. He slept until just past noon. I was up and doing my yoga and qigong before he woke up. He had something to eat and we watched a little daytime television before he left to run some errands. He needs some rear speakers for his car and wants to get his bracelet fixed. This gave me time to try on a dress I had ordered online (I hate it!) and to take a shower and get dressed for our evening out. Dinner and a movie, if all goes well.
In addition to the dinner and the tattoo on his back (images coming eventually), he received a life sized image of Johnny Depp as Jack Sparrow. A gift from my mother. You know . . . even as a two dimensional stand up figure, Johnny Depp is so damn pretty it hurts. 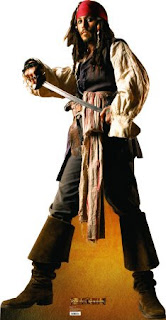