Rob came back from his overnight trip to Ozzfest. He had a great time. I’ll share his amusing stories below, mostly because they are his stories more than my own, more punk the quirk, and this blog is all about me. Me! ME!

Except, me didn’t do much yesterday. I was having a not great vertigo day. Not bad enough to stay in bed but bad enough to make the day difficult. By the end of it I was stuck in bed but that is par for the course except on a remarkably good day. Or one where I took a nap, which is what I do when I know I am going to be seeing someone for dinner or something equally late in my day.

And today Marc has work and school and I have the house to myself. Ummm . . . yeah. This could get pretty boring pretty fast so let’s move on to my horoscope and Rob’s stories before I fall asleep typing this.

Aries Horoscope for week of August 30, 2007
"Here's how you can tell if you have a bad psychotherapist or counselor," says my friend Laura. "She or he buys into all your BS, never questions your delusions, and builds your self-esteem even if that makes you into an a**hole." I agree with Laura's assessment, which is why I'm going to spend our short time together today calling you on your BS, prodding you to get introspective about your delusions, and not pumping up the parts of your ego that really should be melted down. Next week maybe we'll get back to gazing adoringly into each other's eyes, but right now you'll benefit from some tough love.
Apparently, while they were at the show, the guy standing next to Rob turned to him and said, “Punch me in the eye!” “Ummm . . . no thanks,” Rob replied. See how polite he is when he is asked to abuse someone? Rob isn’t as hard core as he looks, obviously.

At another point, Rob and Shay were in the bathroom using the urinals. Some guy standing next to Shay, after having used the urinal, reaches up and slides his hand across Shay’s Mohawk without washing his hands first! Ewwww. “Nice hawk, man,” this stranger said. Shay turned, without stopping his flow, and, moving his penis up and down to pee on the guy’s pants said, “Nice pants.” The other guys in the bathroom laughed.

So those are Rob’s amusing stories. Rob was asked to hit a stranger in the eye and Shay peed on some stranger’s pants. The lesson in this, boys and girls, is do not touch a man’s Mohawk without permission and/or without first washing your hands. 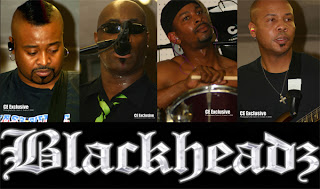