The following was written on Thursday, 27 September. It was not posted yesterday to give due honor to my 100th post. Yaaaaay! In the meantime, I like to keep my promises so here goes.
I announced last week that I would go ahead and start blogging about my vice of watching America’s Next Top Model and last night Rob and I watched it together. I was not surprised that Mila was voted off. I’ve noticed that the girl who seems the most unable to grasp the comments the judging panel offers is usually the first to go. While Mila was not as completely clueless as some of the previous year's first to go models, it was obvious she wasn't quite grasping the seriousness of what she was experiencing. 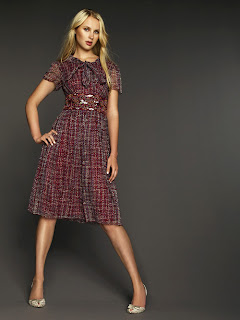 Rob and I agreed, in her photo she looks a little like Traci Lords. That she giggled through the chemotherapy hair loss photo shoot, claiming that she looked ridiculous and found it funny, was probably her death knell. If you can't be serious when you are supposed to be dying from cancer, then you don't understand that modeling is all about acting, as Tyra and Co. say year after year. I am not sure about all of that, frankly. I will agree that it is about emoting and being able to convey a mood with a facial expression for certain photos is important. Also, most professional photographers are probably not going to want to listen to you giggle as you try to compose yourself. Time is money, after all, and until you make supermodel status, the photographer probably makes more than the model. Certain the designer and magazine editor paying for the photoshoot make more money! 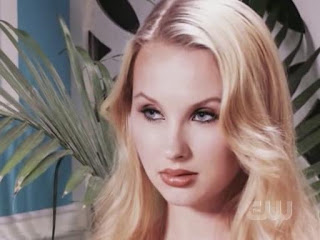 Tyra announced that this year the model house would be a smoke free house. Anyone who smokes will have to quit. She said that young girls watching the show look up to these girls and the ones on the show have to set an example for the ones watching and aspiring. My first thought is this is not going to be good, knowing that some people get really bitchy when they forsake their addiction of nicotine. I'm assuming it won't be that bad and that the three or four girls who are smoking this year will have been inspired by the truly disgusting images that were created for the photoshoot because the premise was glamorous smoking shot versus reality check. Each girl was made to look hideous, hair falling out, teeth yellowed, faces old, etc. What you can't see in Mila's image above is the mirror in which they cropped in a grusome image of her with her hair falling out, etc. Through which, as I mentioned above, she was giggling most of the time. 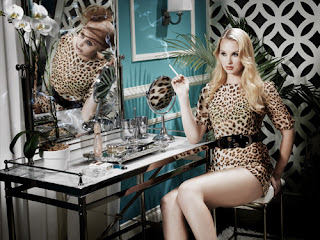 Here's a picture of Traci Lords. 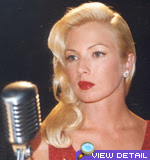 In my previous post, I said I am hoping that Heather and/or Lisa make it through to the end of the show. I rarely choose the one girl who will successfully do this but it could happen this year. In the meantime, although Heather is being ripped apart by the girls behind her back, she was the first one called which means that her photo was considered better than the rest. And Lisa was called second, in spite of the fact that Bianca has made it clear that no stripper will ever be America’s Next Top Model.

I am not saying she will be but now that she’s there for one more week, the chances of another lap dance are at least there! However, Heather did not make any geeky comments so I was a little disappointed. I still have hopes she will do so. Of course, the likelihood of this happening would increase if the other girls would stop talking about how weird she is and get to know her.

Your first assignment is to practice feeling that everywhere you go you are standing on holy ground. Capitalize that phrase in your imagination -- "I AM STANDING ON HOLY GROUND" -- as you move through the world. Your second assignment, which may at first seem unrelated, is to kick your evil twin's ass. Do it tenderly and compassionately, with full awareness that both you and your evil twin are standing on holy ground. But don't stop kicking until you convince your evil twin to take greater responsibility for his or her personal share of the world's darkness.