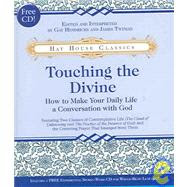 Touching the Divine: How to Make Your Daily Life a Conversation with God edited and interpreted by Gay Hendricks and James Twyman includes the full text of the brief Practice of the Presence of God by Brother Lawrence, a summary (of sorts) of The Cloud of Unknowing. It is the fifth book in the Transformational Book Circle and I remember how the discussion boards were less than kind when discussing this particular book. I was surprised because a lot of the responses had to do with the book being “too Christian.” Even then I had to laugh because obviously these readers had not noticed or did not mind that the previous three books all included frequent quotations from the Bible and were written within the context of Christian teaching. I confess to having already read the writings of Brother Lawrence so I knew what to expect and even debated rereading it but I wanted to do so within the context of this book collection. How would the teachings of Brother Lawrence align with the new thought, law of attraction, teachings of the previous three? In short, they don’t. Lawrence writes about the suffering of Christ, expounding on how God uses suffering to strengthen the soul. Yes, even bodily illness is addressed.

Worldly people . . . see sickness as a pain against nature and not as a favor from God. Seeing it only in that light, they find nothing in it but grief and distress. . . I pray that you see that God is often nearer to us and present within us in sickness than in health (51).

I can only assume that those members who were expressing their offense on the discussion boards are happier when someone misquotes the Bible or even makes up verses that don’t exist. I can understand that. It is easier to only hear what you want to hear than it is to question what you believe and/or want to believe to be true. More interesting to me, however, was the opportunity to read Brother Lawrence’s writing from a different perspective. The previous times I read it, and I’ve read it through nearly ten times if not more, I would say with confidence that I was a believer, a born again Christian. Now I am reading this same text with a self-awareness that does not include the Christian label. I still respect the teachings. I even continue to agree with them. Their truth crosses the limitations of dogma. What he says of prayer, of the challenges one has in maintaining one’s focus on God, is similar to what I have read in Buddhist books on meditation. His adoration and love of God is evident in every page. And his examples, rather than being drawn on the hearsay of some of the previous books where the author “knew a woman who” or “heard of a man who,” Brother Lawrence’s focus is on his own experience. The one time he writes about another, it is traditionally understood that he is being humble and in actuality the “he” of whom he writes is himself. The letters that Brother Lawrence wrote are of a more personal but less gentle tone. I felt uncomfortable reading them given that the very first one clearly states that what he is sharing is meant for the eyes of the recipient only. I suppose it is not very different from reading the published journals of a famous person but that didn’t make it any more comfortable for me. The inclusion of The Cloud of Unknowing is merely an excuse to include a brief discussion and suggested application of the centering prayer that the anonymous author of the text shared with his readers. Very little of the text is actually included, which is obvious just from skimming the table of contents for the book which is clearly dominated by the writings of Lawrence. I was a little disappointed that more attention was not afforded The Cloud of Unknowing because I have never read it and looked forward to exploring this classic text. That’s okay. I found it online. But I do confess to feeling a little mislead by the cover’s indicating that both texts were featured when really only one is featured and the other is merely mentioned. The accompanying cd is another failed attempt at enhancing the text. This one was downright annoying as Gay Hendricks would simply not shut up. The content repeats what is explained in the fifth section of the text. While explaining to the listener the purpose of the intentions before beginning the Centering Prayer, he would say the intentions aloud and then encourage the listener to repeat them aloud. In the time it would take me to inhale, he would start talking again. This happened again and again. Say the words aloud. Go ahead. Now. Quick. Before I talk again. Say them, I dare you. It would have been nice if he could have paused for more time than it takes to take a single breath so that the listener might actually begin the experience. And after reiterating that the listener need only spend fifteen to twenty minutes on the Centering Prayer, he continued talking about how to sit, how it is not necessary to do this longer than the recommended amount of time, when it is best to do the Centering Prayer. In other words, he kept talk talk talking about what the book had already explained. Here's a thought: How about creating a cd that leads the listener through first hearing the intentions, repeating them aloud to themselves a few times, then let the cd fall into a timed silence, fifteen or twenty minutes, as recommended so that the cd, instead of redundantly explaining what the text already does, could be something useful that the reader can use to complement what the text shares? So I guess this is a mixed review because I very much liked the Brother Lawrence material, felt slightly cheated that The Cloud of Unknowing was not included at greater length, and absolutely think the cd is a waste of time and adds nothing to the experience.
Posted by Satia at 5:17 AM