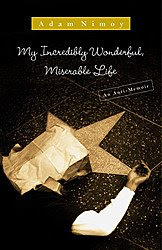 Please note: I use the term "trekkie" throughout this review because this is the term used by Nimoy and I am not going to get into the whole trekkie/trekker debate.
My Incredibly Wonderful Miserable Life by Adam Nimoy is a memoir by the son of Leonard Nimoy. What it is is not what some people might want. It is not some expose meant to trash his iconic father. It is not an exploration of the behind the scenes at the Enterprise. It is not even a linear memoir that goes begins in the present, moves back to the past and then moves slowly through to the present. Instead, Nimoy (not Leonard!) shares his life’s experience in a stream-of-consciousness conversational tone that occasionally comes across as clumsy and emotionally feels redundant. The stories of conflicts with his adolescent children start sounding the same, although the details change. The reconciliations also take on a haze of familiarity. Any parent who has survived the teenaged years will recognize the manic experience of going from beloved to bestial in the flash of a single sentence. For those who are still in the midst of the experience, there may be a nagging doubt—Did Nimoy kidnap my children to write his memoir? Because the story is not told in the typically linear memoir fashion, there is some repetition, the kind of black hole lapses that keep Trekkies debating the worm hole incongruities disjointed the Star Trek story lines in those parallel realities and leaps in time of episodes past. From the very beginning, Nimoy makes it clear that this memoir is about him, his addiction, his life, and although his father’s presence cannot be avoided, this is not a memoir about being Leonard Nimoy’s son. Trekkies will still read this memoir, perhaps be not disappointed in spite of the lack of any inside dirt that would make the typical geek shudder with ecstasy. Instead, what Nimoy has written is a sweet memoir of his own struggle with failure. The guilt he feels over leaving his family is evident even in the parts of the memoir which are not focusing on the emotional manipulation that comes part-and-parcel with adolescence. When his children ask him “Why can’t you come home?” he is as unable to come up with an answer to that question as to the one he asks himself: How did I get here? Where the memoir begins to lose me is that I find myself yet again reading about some thirty something year old trying to grow up. Only he’s actually forty something, and while it is interesting to read a coming-of-age story of a teenager or even a young adult, I am beginning to wonder if anyone ever grows up. Or maybe the problem is that the ones who have already grown up are too busy living their lives to waste time writing about how they are trying to grow up. Nimoy does not give into exploiting himself or his loved ones by offering salacious details. Instead, he gives us a heartbreaking look at the challenges of divorce as he tries to balance meeting his personal needs through the emotional manipulation of guilt, personal history, and adolescent angst. That he does it all sober is a testament to his commitment.
Okay. So let’s face it. Everyone reading this realizes I’m a bit of a geek and I probably have some Star Trek glamour that I have not addressed in this review so here it is, the bit of Nimoy experience I hoped beyond hope Adam Nimoy would discuss. His father once appeared in Equus which received very positive reviews in the New York Times. I remember the furor over the nudity of this drama and how the review made it clear that the nudity was not gratuitous, pivotal to the plot, etc. I remember this and that Nimoy (Leonard, not Adam) received excellent reviews. With all the time traveling back and forth throughout the memoir, I was curious to see if Nimoy (Adamn, not Leonard) would ever address his father’s performance in this drama. The answer? Yes. He does. YES!
Posted by Satia at 6:37 AM