The Gates of Rome by Conn Iggulden 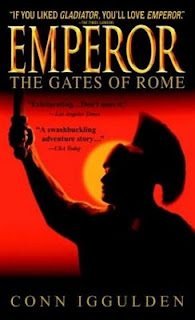 The Gates of Rome (Volume 1 in the Emperor Series) by Conn Iggulden is an ambitious attempt to give an early history to the well known history of Julius Caesar. As imagined by Iggulden, who is very well-versed in early Roman history and the details of daily living before the Roman Empire came into full flower; it is an interesting childhood and early youth full of bullying, gladiatorial training, and more. As the blurb on the front cover says, “If you liked Gladiator you’ll love The Emperor.” Too bad I didn’t like Gladiator. Too bad I also read a far superior imagining of the early Roman emperors when I was a teenager. Iggulden’s novel is a good book but not the “brilliant” that some reviewer at the Los Angeles Times seems to claim it to be. It’s a beach book, a summer read. Interesting without necessarily being provocative or even challenging. And if you’re very familiar with the historical period, you won’t walk away with any new knowledge. As I alluded to before, I read a better book—I, Claudius by Robert Graves—when I was a teenager and loved it. I rushed to read the sequel, Claudius, the God, as soon as I had finished the first novel. I highly doubt I will read the sequel to Iggulden’s book. However, I recognize that most people would not have the patience to read Graves’ superior novels so there is a place for this series. Unfortunately, I feel my time would have been better spent finally reading Caesar and Christ by Will Durant. In the end, this novel is not a huge disappointment but a bit of a letdown.
Posted by Satia at 8:14 AM