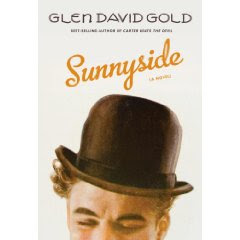 Sunnyside by Glen David Gold is one of those rare novels that dares to be different and succeeds in being brilliant. The unifying thread is Charlie Chaplin, whose presence throughout the novel is felt on practically every page. There is a broad list of characters including the historical famous to those completely rooted in Gold’s vivid imagination. Spanning the time preceding and immediately following World War I, the effects of the war are experienced mainly through the eyes of Chaplin, Leland Wheeler, and Hugo Black. During the first few parts of the novel, characters are introduced in a haphazard manner and seeing how Gold manipulates and maneuvers the characters so that the disparate threads eventually, inevitably, weave together. No character is presented without a reason and, given the large number of characters, this is remarkable. Chaplin, as defined by Gold’s vision, is both brilliant and insecure. His womanizing is not downplayed nor is his arrogance. What’s more, Gold manages to convey Chaplin’s humor through a media not usually associated with Chaplin: the written word. The dialogue is crisp when necessary, poignant, and even occasionally profound. The other two main characters are equally realized and establish different tones. Both men end up fighting in Europe, ironic in that they are Americans fighting a war that never touches their homeland while Chaplin remains in Hollywood to produce more movies. How much of the novel is fact and how much is mere fiction is mostly relevant only to die hard movie fanatics. And even a reader who can anticipate certain inevitable events, the reader who recognizes characters immediately upon their introduction (such as future business partners or wives) will still find the way Gold moves the narrative along wonderful. Even when he boldly states what is going to happen, the reader wants to know how the character is going to get there from where they are now and is compelled to read on. Altogether, a surprisingly well written novel. I am eager to read more of Gold’s writing.
Posted by Satia at 9:05 AM