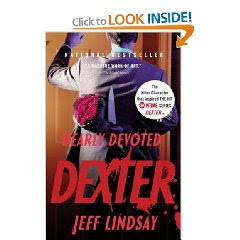 Dearly Devoted Dexter by Jeff Lindsay is the second book in the series that inspired the television show, Dexter. I already knew that the second book would be a sharp departure from the second season of the television show. In fact, the first season was already a departure, adding certain subplots that were not a part of the novel, fleshing out the characters in different ways and directions. With all of this said, I have to say that I enjoyed this novel more than the first. I read it without comparison, consciously choosing not to relate the book to the show. Instead, I wanted to measure the text on its own merit, divorced from the show. This book Dexter is different from the television Dexter and the subplots of the book, not nearly as many as in the television show, are quite a change. This Dexter is also less violent. I can’t remember how many people Dexter consciously kills in the television show but he doesn’t kill many at all in this one book. Unless I mis-remember the season altogether, which is quite possible. The book Dexter is a well crafted anti-hero, a character not meant to be admired or even liked. Instead, the reader lives inside of Dexter’s head. Unlike the television show, where the viewer can see how Dexter charms those around him, the reader knows that Dexter has everyone fooled but, like Dexter himself, is not sure how he does it. Because Lindsay chooses to limit the reader’s perception of Dexter by writing the novels in the first person, the reader only knows and thinks, feels and experiences those things that Dexter does. That he does so to good effect is remarkable because the book Dexter is less charming than the television one. The deprecating dark humor that undercuts Dexter’s narrative is sharp—if you don’t like sarcasm and darkness then do not read these books! And I am on the fence about whether Lindsay is ingenious or indifferent. I will have to read more books to determine one way or the other which it is because there is something that is revealed in this book, something that is not part of the television show at all, that casts Dexter in an even more horrifying and less sympathetic light. I hesitate to say more because to do so would be to include spoilers. Ultimately, this book, like its predecessor, is a well written novel that comfortably fits within the limitations of its genre. Where it breaks new territory is in allowing the protagonist to be unlikable and even loathsome, a risky choice that, in the hands of a less skillful author, would have ended the series before it even began. Now I need to read the third book to see if Lindsay had the courage of his conviction as implied in book two.
Posted by Satia at 6:31 AM