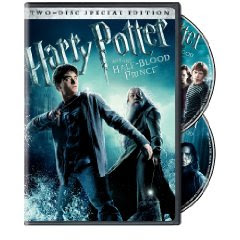 Harry Potter and the Half-Blood Prince is darker than the previous Harry Potter movies which is not unlike the books which likewise become more intense with each volume. The actors are so well cast, something upon which my son and I often remark, and the special effects continue to surprise, working so well within the context of the film that they don’t seem intrusive or obvious. It is all so seamless. Of course, some details are lost in translation and one of the pivotal scenes in the book has been modified for film. No, it is not the final confrontation but a previous scene. I’d say which one but I don’t want to risk any spoilers. I am honestly impressed by how well they have managed to translate these books to film. I am surprised that I have enjoyed both equally. This movie is probably not my favorite in the series but then the book wasn’t either. I wiped a few tears when the movie ended; when I read the book I had to close it because I couldn’t read through the tears that were coming to my eyes. The books have a stronger impact on me emotionally and I don’t know if it’s because I know what’s coming by the time I see the movie or not. Emotionally, this movie didn’t hit me as hard as the fourth and fifth. I’m looking forward to seeing the seventh . . . when it comes out on dvd . . . a long, long time from now. (insert pouty face here) The most remarkable thing about the movie is that Rob neither knows the climactic moment of the film nor how it ends. Those of us who have read the books (me and Marc) or have learned the big reveal from the internet (Rei and Joe) have gone to great lengths to say nothing that would spoil the surprise for him. Let us not forget, this is the man who bought me the fourth book in the series not realizing that there was an entire phenomenon surrounding the books and oblivious to the fact that the book he had given to me was the fourth one. How he has managed to remain so clueless is beyond me but maybe that’s why he can put up with my lack of awareness.
Posted by Satia at 6:05 PM