The Writing Diet: Write Yourself to the Right-Size by Julia Cameron 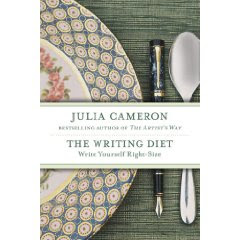 The Writing Diet: Write Yourself to the Right-Size by Julia Cameron was not at all what I thought it would be. I had thought it would be more about writing than diet and in some ways it is. It really depends upon how you perceive the content, I suppose. The first part of the book offers the “tools” Cameron recommends to the reader who is trying to lose weight. (The fact that it was so clearly focused on food and weight should have been my first clue that this book was not what I had anticipated—and it was. I got it. I still read on but at that point I shifted my expectations in a more complementary direction.) The tools are not too different from the ones that Cameron suggests in her other books—morning pages (writing!), daily walks, weekly “artist” dates—although this time the dates are about eating a lovely meal rather than immersing your creative spirit in an art gallery or antique shop or whatever. She also recommends keeping a food journal (who doesn’t?) and eating clean. The truth is, before the past couple of years I would have thought that most of this advice was common sense and unnecessary but I have since come to learn that many people do not understand portion control, that there are people who actually think grabbing a super-sized meal at the fast food place on the drive home is a snack, and that some people don’t understand that pre-packaged is not a healthy alternative to fast food. Some people absolutely need to learn these things and what Cameron has affectively managed to do is write a book that will work alongside any other diet plan. Are you trying Weight Watchers? Cameron’s book would work well as a supplement. Trying South Beach or Atkins? Again, Cameron’s book can be read and applied alongside whatever lifestyle changes you are trying to make in your life. The second part of the book is a collection of short essays that offer further writing exercises. She shares her own story but mostly the story of other men and women who are trying to lose weight. Most of the stories she shares are for moderately overweight people. You won’t read stories about how someone who was a size 22 wrote their way to a size 6. Instead, you will read about a lot of size 12 women who are now a size 6 and so encouraged with their success they are still committed to getting down to a size 4 or lower. Cameron shares about how people use food to self-medicate, to avoid their deeper needs or their more complicated emotions. She takes the time to describe the various temptations in detail—chocolate cakes that are rich, cheesecakes and raspberries, ice cream and smothered fries, pies, etc. Frankly, the second part is where the book fell apart for me. Reading about size 6 women fighting to get rid of the last bit of cellulite or pooch in the tummy made me feel fat and loathsome. Reading the food descriptions made me hungry. I literally had to time when I read the chapters around when I had eaten so that I wouldn’t be triggered to get a snack. And I can only imagine how these things would have affected me if I had ever been bulimic or anorexic or addicted to exercise. Another problem I had with the book is how she describes the addiction of morning pages or exercise as if any addiction were a good thing. Of course, this is simply a poor choice of word, a very poor choice of wording given Cameron’s own history with alcoholism. There is no such thing as a healthy addiction. If someone literally cannot get through their day without writing their morning pages then there is something wrong. A tool should never become a necessity and when a person cannot live without doing something then that “something” is no longer a useful tool. The same is true for exercise which is a very useful tool but which can also degenerate into an addiction, a compulsion beyond a person’s control. Setting aside my expectation that this book would be about writing, about the craft of putting words on the page, I still found this book a disappointment. Forget that it does not live up to the wonderful content of The Artist’s Way and you are still left with a peculiar book, a good idea that somehow turns in on itself until even the best of intentions becomes a perversion. What I would recommend are the tools in part one; they are good, mostly common sense but sometimes common sense is invaluable. I would then recommend that the reader stop there. Don’t read past part one. Apply the principles presented in the first part and leave the rest to those readers who like their weight loss resources sprinkled with a “healthy” dose of codependency. Also, I should say that I rushed through the second half of the second part. Working through it slowly, applying the suggestions with all due diligence, I gained enough weight for my knees to begin hurting. I still see great merit in the tools but, as I said, I found too much of the content potentially triggering and although I don’t suggest that I gained weight because the book made me do so, I will say that the second part of the book did not make it easy for me to apply those very useful tools. Like I said above, read the first part, skip the rest, and you’ll be able to use the best of this book’s content with anything else you are going to try, whether it’s Jenny Craig or GI Diet or what have you.
Posted by Satia at 6:38 AM