The Rest of Our Trees

This is a picture of our trees. 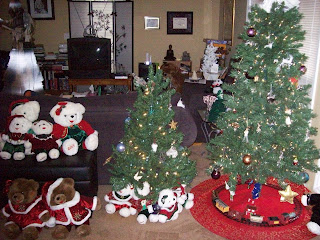 The teddy bears were collected over years and when we had three small trees (one for each of the children), the bears filled in the space beneath the trees until Christmas eve when I would put out all of the gifts.  The one on the right is our official tree, a bit of a mess because there is no color coordination at all.  It's just a tree with every ornament Rob and I have acquired through the years.  And we've acquired some pretty funny ornaments, few of which belong together on the same tree. 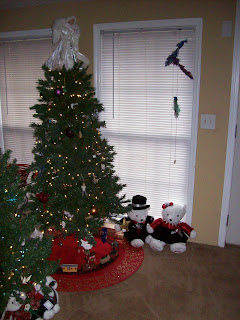 This is a very blurry.  You see the two bears on the right?  Rob bought those this year because, clearly, we needed more bears.  We actually think they look more like New Year's Day bears because they are all dressed up in black and red velvet.  With silver trim and bows. 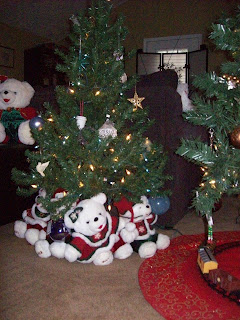 And this is Marc's tree.  His is the last of the small trees because he is the last to still be living at home.  And you can see the train tracks under the other tree.  Rob bought a train to go around the tree (which Bibi loves) and that is why now most of the bears are relegated to sit on the storage thing Rob bought for his legs only to discover that he was sitting lower on the couch and it wasn't as comfortable as he thought which is not unlike my realizing that this sentence is insanely long and breaking a lot of basic grammar rules so I should probably stop now. 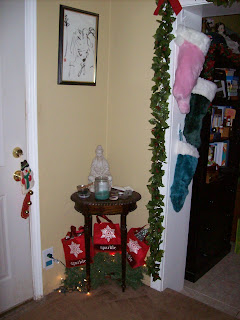 And another blurry pictures, this one of the corner directly across from the tree.  And stockings.  We don't have a fire place so we just used the large doorway that goes from the kitchen into the great room.  Those three are Bibi's, Joe's, and Marc's.  There are three more on the other side.  Erin's and mine are the last to be hung because hers has stuff that you can recognize sticking out and mine . . . well, I'm not responsible for mine so I don't know when it will be filled. 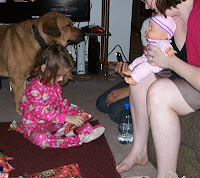 And just for fun, here's a photo of Bibi opening a birthday present.  Her
birthday is on the 16th so it was just over a week ago.  This picture was taken before she decided that footies on her birthday simply would not do.

That's Goobo (sp?) in the background and Erin is holding one of Bibi's gifts, a baby doll.  There are more birthday photos from our trip to Build-a-Bear.  I just have to slow down and share them.  But this photo was in the same batch as the tree ones soooo . . .
Posted by Satia at 11:51 AM