Bildungsroman fashion) grown notably older in many ways:  having dealt with her mother’s death, having explored her sexuality and reacted to attempted rape by her ex-lover, having become a single mom to her sudden sister, having been forced into a drudge job to make ends meet—while Harry [Potter] has gone to the movies.  (76)

in literary criticism, or coming-of-age story, is a literary genre that focuses on the psychological and moral growth of the protagonist from youth to adulthood
Definition found here.

It's interesting to note that the covers for each of the seven dvd seasons for Buffy the Vampire Slayer seem to evolve.  In the first season, she is pictured alone.  In the second and third, Angel is featured on the cover. Seasons 4 and 6 have friends.  And seasons 5 and 7 have Spike.  I am sure that if I took the time to ponder the significance of each, I would have much to say.  That Riley never features on the cover and four out of seven seasons have a lover is surely significant, don't you think.  Wouldn't it have been interesting if the designers had returned to Buffy alone on the cover for the seventh season?

But I digress because I have to say that I love this word!  Bildungsroman.  What is your favorite coming-of-age novel from your own growing up?  The ones that come immediately to mind for me are:

Are You There, God?  It's Me, Margaret by Judy Blume
Dandelion Wine by Ray Bradbury

I've ready many others but these are the two that I read while growing up that had the most meaning to me.

Gerry Bloustein quotes Bessière’s comment that “the impossible is a realm of polysemy,” and argues “speculative fictions such as Buffy can resonate with the adolescent experience—albeit nuanced by gender, ethnicity, race and class—even in social context far from their geographic origins” (428).  (99)  I’ve forgotten how to quote a quote so I apologize for my not doing it right, or at least I’m assuming that this is not done correctly.  *sigh*


polysemy (noun)
is the capacity for a sign (e.g., a word, phrase, etc.) or signs to have multiple meanings (sememes)
Definition found here.

I need to remember this word, for certain.  People have a predisposition to ask me to interpret their dreams, something I am loath to do.  Images become metaphor, especially in dreams.  The symbolic meaning of a rose is typically understood to mean "love" and yet I have met many who do not like roses and do not equate them with love.  I know a person who cannot abide a bouquet of flowers because they remind her of funerals and another who hates potpourri which remind her of death.  And so, it stands to reason, that a bouquet of roses to any of these three would mean any number of things.

So it is that the benefit to be gleaned from recording dreams and working with their symbolic meaning is personal.  A dream dictionary may be a way to start, looking up an image to see what the typical interpretation could be but to get to the real meaning, the discipline of looking for your own meaning is necessary.  This is why I prefer not to interpret other people's dreams.  And now I will have a lovely word to throw at the person who next requests my help.

Thus there is a complex tuning of emotional response, with attentive viewers recognizing both the strength of the relationship Buffy and Angel have built, and the adumbration of trouble . . . not to mention, of course, the reiterated danger of a “vampire in love with a Slayer” . . . .  (112

For those of you who do not write, you  may not quite appreciate why I adore this word and simply had to share it even though I knew its meaning.  Of course, anyone who reads novels or watches a movie knows the joy of reflecting back and finding some evidence of foreshadowing that was overlooked.  But the thing I find so surprising is when I find foreshadowing in my own writing, particularly when I am not even sure how the story is going to evolve.  A character will say or do something that is clearly foreshadowing something pivotal later and I'll just sit there wondering how I could have known.  It makes me wonder if sometimes a writer intentionally inserts some foreshadowing or symbolism because, just a there are times when I am joyfully surprised by some detail I had overlooked, I am all the more disappointed when this sort of thing is so blatant as to be heavy handed.

Willow’s line from “Reptile Boy” (2.5) is perhaps the most compact example of a pattern common in Buffy:  smaller elements represent larger ones, a kind of semiotic synecdoche (using both sound and picture).  (114)

Semiotics, or semiology, is the study of signs, symbols, and signification. It is the study of how meaning is created, not what it is.
Synecdoche: a kind of connotation in which a part is used for the whole (as hand for sailor).
Definitions found here.

Again,  find myself collecting words that seem to be intimately and closely related to one another.  The interpretation of symbols, the polysemy especially of that which is merely adumbrated, as in the line alluded to here:  "Guys!  Buffy!  Snake!  Basement!  Now!"  Ahhh . . . the delights of a Freudian interpretation whenever the words "snake" and "basement" appear together.  But then there's the snake in the Garden of Eden and the Native American snake symbolizing rebirth and . . . .

What gives me a kick out of this is how I can picture Whedon and the other writers discussing a breathless Willow trying to get the attention of the "guys."  Succinctly blurting out in as few words as she could the urgency of what is happening.  Then let some academic get his/her hands on the same text and it is no longer the gasping cry for help but a semiotic synecdoche.  Anyone who has ever suffered through an English literature class in college knows whereof I speak.  Don't get me wrong.  I get off on this sort of thing.  But I know others who just groan in despair and wonder why a cigar, or a snake in this case, can't just be a cigar.

The moment comes when the wise man is formally dispensing his wisdom, in Giles’s touching and humorous overhead projector expository scene, accompanied by his own choice of soundtrack, The Danse Macabre—diegetic  music which sounds thin and limited in terms of the texture of the recording, the rhythm, and the instrumentation. . . . (148)


diagesis (noun)
a narrative or history; a recital or relation
Definition found here.

Now, for those of you unfamiliar with this episode, Hush has very little dialogue which, for a show often praised for its repartee, was quite remarkable.  This was the only episode to be nominated for an Emmy, ironically enough for writing.  Go figure.  One of the key features of this episode for me is the music which beautifully evokes the mood, drawing a response from viewers as they watch and listen.  And to undercut the amazing score by having Giles play this sort of canned music is precisely the sort of intelligence one rarely finds on television.  (It is also noteworthy to compare this with the episode The Body which has no music and how silence is used in that episode to say so much.)

And for those of you who are thinking that this may be the nerdiest post I've ever written, breathe a sigh of relief that I chose not to use the Shawn of the Dead image or Star Trek image that almost made the final cut. I really held myself back this time.

Also, I wasted over an hour fighting with blogger's bullshit.  Here is what I saw and even in the html this is what you should have seen but no matter how I edited this post, blogger input spaces and breaks I did not create.  It would have been nice of blogger could just let me create a post and have it show up exactly as I created it without adding gaps and crap. 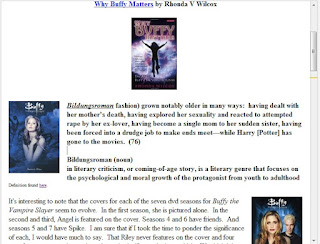 The irony in this is, of course, that if you should go back to my older posts you will see that blogger took away all of my paragraphing.  It is frustrating to spend time writing something only to have it fractured without any way to modify or correct it.  Blogger has become exhausting.
Posted by Satia at 3:20 PM