In Which I Finish Reading Another Book I suppose this is getting tedious to those of you who are brave enough to be reading along with me but I finished yet another book. (Aside: I won’t be writing these comments about books I am rereading because that would be redundant.)

I finished reading Scott Hahn’s Hail, Holy Queen which is about the Virgin Mary. After the relative failure of the other Catholic books I have read (see Catholicism under labels) I had already decided to approach this exploration from a different angle. Actually, “decided’ may be too strong a verb . . . rather, I had considered and Hahn confirmed what I ought to do. I have been approaching this Catholic exploration from a strictly intellectual direction, reading books and the Bible. This has worked for me in the past and much of my Biblical knowledge is self taught using various resources, etc. However, it is not working now and I need to approach things from a slightly different angle. I was thinking I would begin praying the rosary in conjunction with my reading. I wasn't sure how to do it and I definitely didn't feel that I would glean much from the experience if I were constantly referring to a sheet of paper on which I would see the various prayers. After all, that I know the "Our Father" is one thing but I do not know the "Apostles' Creed" nor the "Hail Mary" nor the "Glory Be" let alone the mysteries. I would need the reference sheet to do the rosary in the traditional manner and did not think that it would have the same deeply spiritual impact it ought to have under the circumstances. After all, prayer is supposed to be a deeply spiritual and meditative practice and reading aloud somehow lacks that promised depth.
Hahn's book ends with a discussion of the rosary and it reinforced that this is what I need to do but I was still, very briefly, at a loss. Then I realized that the author of The Way of a Pilgrim used his rosary to count how many times he prayed the Jesus Prayer. Aha! I could do both. I could begin with the traditional rosary, using a cheat sheet to do each of the prayers, including the mysteries. Then, when I had completed that first part, I could begin praying the Jesus Prayer for a pre-determined number of cycles.
Having my intuition confirmed was actually all I took away from the reading. The book is well written and not overly scholarly although it is clearly written by a man who is seeped in theological intellect. The book chapters are broken down into sub-chapters which have unfortunately been given titles that detracted from the overall seriousness of the subject matter. For instance, when discussing how Matthew gives a geneology which includes women and traces Mary's lineage back to David the title for this section of the chapter is "I Dream of Geneology." Ummm . . . cloying but not very clever. And, for me, this distracting cuteness was not effective.
Cute sub-chapters aside, I can't actually say that I appreciated this book. I did not have a spiritual response to it at all. I was frustrated, according to the back cover (which, because I had bought the book on ebay I had not read), clearly says that Hahn explores "the relationship between the Book of Revelation and the Roman Catholic Mass" mostly because the Book of Revelation is possibly my least favorite book in the Bible. The arguements in defense of Marianism are well, if predictably, written and presented. I say predictably because there seems to be a standard "Christian defense" formula that all Biblical scholars use when writing. Perhaps I thought that Protestants wrote in one way and Catholics in another. I was mistaken.
In any event . . . ho-hum . . . I am sending the book off to my mother in hopes that she will find something within the pages to be stimulating and resonant.
In the meantime, a picture of me and Romanov. 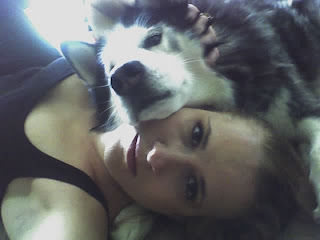