In Which I Feel Better and Get Busy Thanks to Rob’s generosity and his giving me his old laptop, I am able to spend some of my Saturday online. Yaaaay! Which is why I am busy reading poems, critiquing poems, and revising my own poems. I signed up for the zoetrope site and so far my one poem has three critiques, which is surprising, to me. After less than one day already so many responses. The thing is, I almost joined writing.com a while ago but I had a hard time with how cluttered to the site felt. When I asked others who belong to the site they would tell me that it took a while before you got any responses. It could take upwards of weeks even. I was too impatient for that kind of waiting. But zoetrope is obviously working wonderfully. And on the 27th, I will be meeting with the novel writing group. We won’t be swapping writing yet which means I don’t have to choose a novel yet. I have three from which to choose or I could just start working on another altogether. The choices include:

I am probably doing the young adult novel this year for nanowrimo, start it all over all over again. I had considered changing it to first person but I don’t know how well that would work. I also think I know why it unraveled before and I am definitely in a position to make the necessary story changes to hopefully not have it unravel again. In other words, I’ll be making an outline, try not to let the story get away from me as it has done in the past. (Truth is, I also had some ideas that would make the marriage novel stronger and be less contrived but I don’t know if I am emotionally up to dealing with so much sadness.) And next Saturday, I’m meeting with another writing group that does not, at this time, have a focus. There are several people interested in the group who seem to be leaning towards novels but we’ll see who shows up. Whoever is there will obviously have more say about the focus of the group over all than those who are not voicing their preferences. If this group also leans towards novel writing then I’ll just alternate chapters between groups and work on the same novel. No need to split my creative energies between two major projects. Not when I have other things on which I am writing already—like this blog, my chapbook, etc.
Posted by Satia at 8:38 AM No comments:

In Which I Watched But Didn't Care

I woke up this morning, after another night of insomnia, and had no clue who was let go from the show. I remembered some of the pics that were taken. But I couldn't recall who was sent home this week. I figure it is because they were on a rock climbing wall. It was just another reminder of something I can't do unless we get to the bottom of why I have vertigo. Get rid of the vertigo and I can do something that I love doing. Don't and all I can do is watch some girls get pretty pictures taken of themselves while doing it.
So I had to use Television Without Pity to remind me who, exactly, was gone. Oh yeah. Kimberly. I suppose it was the best choice because clearly she didn't make a lasting impression on me. Not her fault. Yesterday I felt pretty horrible most of the day and by the time the show was on I just wanted to forget that the day had happened. Which is also probably why I couldn't remember the details of the show. 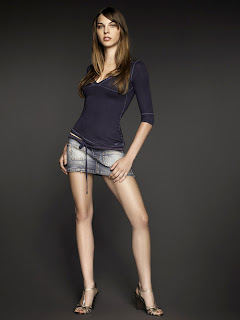 I'm afraid of heights, which is one of the reasons I love rock climbing because it forces me to get out of my head and be absolutely present in the moment. Obviously, there were bound to be girls who were scared as well. And they had to do it in heels. 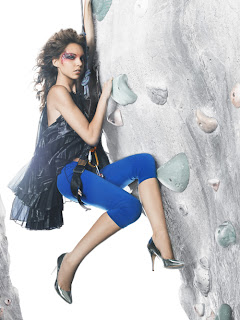 It's not a bad picture but if you look at her face close up, which is what they always do--zooming in to see the face--it is not a good picture of her face. There is something flat about her features because of the angle. If not for that, I think Ebony would have been gone because she is so certain she'll be sent home and her attitude seems like a prophecy.
Jenah had the advantage because she rock climbs and Saleisha, even though she's afraid of heights, definitely committed to the moment and the photo. For the record, Heather was called second or third. I forget. Not that it matters. The judges love her. If she can just remember to hold her head erect, this will make a huge difference. In the meantime, next week is the makeover week where someone inevitably cries and whines about her new hairstyle and it looks like someone is going to have her head shaved. Honestly, I am not even going to try to guess who it might be. Even if I were to guess, I can say with confidence that I would be so wrong that you could immediately rule that person out as the one who gets shaved and narrow down your personal odds at guessing correctly who it will be. 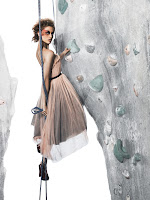 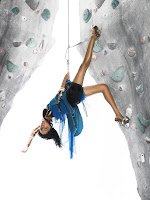 In Which I Apologize But Am Not Sorry I apologize for not updating my blog as often as I would like. I am having a hard time adjusting to my new level of vertigo which has, in spite of my hopes and expectations, gotten worse. It is incredibly discouraging. Like walking a path that you thought was going forward only to realize that you are back at an earlier point and you don't even know how long it is going to take for you to get back to where you were let alone where you want to be. I feel a little lost. I am trying to keep up with my responsibilities and that uses up much of my energy. But it gives me a sense of accomplishment. I need to feel that right now when I can do so little. I want to clean, to vacuum, to cook dinner. I spend most of my time in bed. So while I do apologize I can't say I am sorry. If I had a choice, if my body were in a different place, if the vertigo would just go away, I wouldn't be writing this post at all. I'd be writing something amusing about my day, about what I overheard, or about what I am writing. As it is, the best I can do is this:

Me: I'm really tired of having bad days. Do you remember when the last time was I had a good day? Rob: Yes. It was about ten months ago.

It doesn't sound funny but I laughed out loud. There is something darkly humorous about the fact that I have reached a point where I think a day I can sit up at a computer for more than an hour is good when, once upon a time, I was being paid to sit at one for 8 hours a day and would still come home and sit at one for more hours, to do more writing. Rob's right. I haven't really had a good day for over ten months. It would be nice to have those days again. For now, I'm having a good day which is worse than it was a month ago becasue I'm worse than I was a month ago.
Posted by Satia at 7:06 PM 2 comments:

In Which My Plans Were Cancelled Once again my acupuncturist had to cancel so Rob and I have agreed that it would be best if we just schedule my appointments for Tuesday. This way Rob won't have to take time off two days in a row. As it is, by the time they call us to cancel we are already well on our way to the appointment so it is too late for Rob not to miss any work. And it is also too late for me because once I've gotten up, dressed, lef the house, and returned, I am dead for the rest of the day. I did some reading. I did some writing. Mostly, I lay down. I started reading Dark Night of the Soul as was my intention for this month. I also managed to cook dinner so I wasn't completely wiped out. So tomorrow will be another lost day for me. Another acupuncture appointment. Another day of my being too tired and needing to stay in bed afterwards. More reading, definitely. Perhaps more writing. Other than that, there isn't much to say.
Posted by Satia at 9:17 PM No comments:

In Which I Make a Rather Embarrassing Discovery
On my list of 101 Things I wrote that I want to plant a gardenia in our back yard. I kind of knew where I wanted it to be and discussed it with Rob. Yesterday Rob showed me a bush close to where I want my gardenia to be planted, when we plant one. There was a beautiful white flower there. I said, "That's a gardenia." Rob disagreed, said the leaves are wrong for a gardnia and I said, "No." I climbed down from the deck and walked around to the bush, bent over to smell the flower and, yes, it is a gardenia.
I guess planting one there would be redundant. On the other hand, at least we know one will grow and bloom there so why not another?