In Which the More Things Change, the More They Stay the Same Flashback a moment to September. I met with a writing group and we all agreed to meet once a month. We were at a location and we met on the 3rd Saturday so I just assumed that once a month meant we would meet at the same location on the 3rd Saturday of the month and that is how it was going. Until October when a week before our meeting another meeting was held with other members of the larger umbrella group under which our smaller writing group had originally met. Same location but because they were meeting to discuss NaNoWriMo and our smaller group was meeting one week later I didn't go. Big mistake. The bigger group dis-banded our smaller group, divided it into two other groups. And didn't bother to email me about it. A lot of emailing back and forth and eventually I was merged into one of the two groups. But they were meeting on a day when I already had plans. I couldn't go. They tried to rearrange things but I said to please not do that on my account. Fair enough. They met without me on the third Saturday of November (the 17th) and in the process moved the location. Uh oh. I talked to Rob and said, "Can we on the third Saturday get me here instead of there?" The old location was more convenient based solely on this--I live at point A and the original location was point C with the studio where Rob needed to be being point B. A semi-straight but definitely convenient location for both of us. So we were still in the "Can we do this without over complicating his life/schedule on Saturdays?" when I got an email announcing that they are meeting on December 1. ??? Okay. Let's look at this objectively. I joined a group in September and Change # 1 the group gets reorganized without anyone telling me what is happening. Then Change #2 the location is changed. Rob and I are still trying to determine if that will work for him when Change #3 hits and now the time of month is changed. The problem is that I have completely lost confidence in the group. There are so many changes happening from one month to the next and it is so very difficult for Rob and I to coordinate things what with his schedule and my physical condition. Also, there is another group that meets on the first Saturday of the month (not a writing group) that I have wanted to participate in. So far I haven't been able to do so because they keep meeting in the evening, which is hard for me because even on a good day by the evening my vertigo wants me to stay home if not get back in bed altogether. There's still the writing group that meets every other Tuesday. I haven't been able to go since the first meeting. And with the umbrella group, I also have a writing group that meets every second Saturday of the month at the Borders on Cobb Pkwy. We met for the first time in October at a Starbucks but the venue was not as convenient as we had hoped. Borders was chosen as a better option and we met there in November and will meet again in December. On the second Saturday of the month, every month. And the location was the only thing that changed. Not the day of the week or time of day or time of month. I don't know. Maybe in my old age I like things to be simple but I do know that too many changes is simply too confusing for me.
Posted by Satia at 10:43 AM 4 comments:

In Which I Am Thankful

It is occasionally remarked that I have remained upbeat and positive in spite of my vertigo/situation. Listen, if I had a choice, I'd pick something different. "What? Vertigo? Hmmm . . . you know, I think I'll swap in the vertigo for a full head of grey and white hair. How about that? Not enough? Okay. Give me a few wrinkles around the eyes. Deal? Deal!"

Okay. So I don't have a choice. I have what I have.

I also have a turkey waiting to be put into the oven and family coming over for a feast. I am thankful. Thankful for my wonderful children and Rob who all fill my life with fun and frustration, laughter and love. I am thankful for my mother who scared me out of her kitchen but taught me to love the alchemy of cooking. I am thankful for knowing that my loved ones are aware of my love, are living in a world that is complicated and contradictory but are safe in the knowing that somewhere out there is at least one person who deeply loves them.

This year we will have all the usual. I am up and already preparing things. Marc will return with his siblings. Rob will finish up whatever it is he has happening at the studio. We will be gathered together to be reminded of the love we all share and then return to our lives a little more stuffed than we were when we got up this morning.

I hope you all can say the same! 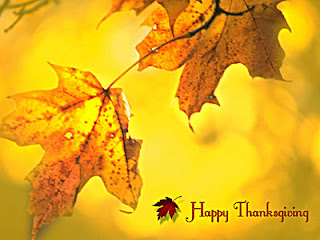 When life gets weird, should you take refuge in decorum and tradition? Should you intensify your commitment to the humdrum? Is it wise to dress more conservatively, act more dignified, and smile more automatically? I say no. When the daily rhythm veers off track into unexpected detours, I say it's prime time to gleefully depart from The Way Things Have Always Been Done. In fact, I advise you to cultivate your rebellious questions and celebrate the unusual impulses that bubble up. They will help you harvest the epiphanies that life's weirdness is tempting you to pursue.
Posted by Satia at 10:34 AM No comments:

In Which I am Feeling . . . Meh I have written a post for my wellbeing blog and that is all I care to blog about today. I am so far behind on my nanowrimo but it is still only week three and I could still manage to catch up. I am also still numb with Dayquil and all my body wants to do is lie down. I should do some exercising on my recumbant bike but it is hard for me to motivate myself to do so. I think if I were not trying to live through a head cold, if I did not have to fight with the constant vertigo, it would be much easier to soldier through. As it is, I want to lay down my arms and raise a white flag of surrender.
Posted by Satia at 10:44 AM No comments: