Snowdoll is growing by leaps and bounds. We had to get her a new collar. So Rob went without me to make sure I didn't buy something with pretty flowers or something like that. And he came home with this: 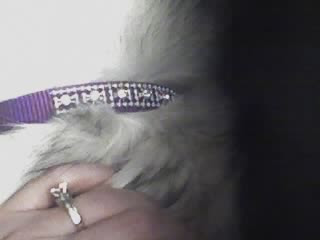 It's purple with pretty rhinestones.
(Yes, that is my engagement ring in the pic!) 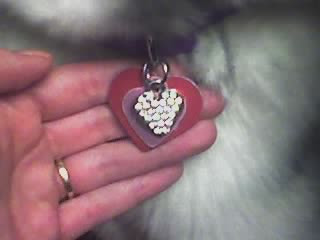 And now she has another heart on her collar,
this one with rhinestones.

So Rob came home with all sorts of puppy bling for Snowdoll. She feels like a princess and looks like one. However, she eats like a pig. If there is food present, she will eat it. The good news is that we can fill her bowl and she will eat her fill and leave what she doesn't want to finish now for later when she feels hungry again. However, this will not stop her from eating Romanov's food or any scraps that fall while I am cooking any more than it will stop her from digging into the garbage to retrieve egg shells or pear cores. Still, she is managing to keep her girlish figure. She's lost her puppy fat and has slinked her way into Siberian Husky adolescence. When Romanov went through this phase, he looked "too thin" but we'd read enough about the breed to know that this is normal for them. His coat was thick and shiny, his eyes clear, etc. And eventually he outgrew his adolescence and now he is as solid as he was when he was a puppy. Only he's bigger. So Snowdoll, in spite of her piggy ways, still looks downright skinny. I am a wee bit jealous.
Posted by Satia at 10:43 PM