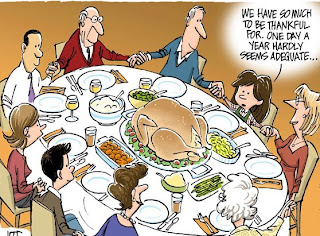 Gratitude should not be focused on a single day of the year, as we all well know. But it is nice to have a reason to pull the family together, to slow down and share some time over a meal mutually enjoyed. In Reiki, there are five principles (also called intentions) on which the practitioner is supposed to meditate each morning and evening. The third of these is “For today, be grateful.” The implication is not merely to be grateful but to do something for which others will be grateful. Today I am surrounded by reminders of why I have so very much to be grateful and opportunities to hear the words “Thank You” exchanged with frequency and sincerity. And I am reminded that there are those who do not have family surrounding them, who are suffering in the face of tragedy, and who pray for even a modicum of the optimism I have each and every day. Indeed, one day is not enough and it is more than some experience in a lifetime.
The following was written by my son's friend Matt Cruea.
The Gobbledegooker Once upon a night most dreary There was a man most weak and weary He sat upon his easy chair And gave himself unto despair For on this day when one gives thanks The men in suits had closed the banks His 401K was assuredly gone And his savings account was overdrawn As he sat alone in his study most dark He heard a noise; perhaps a bark? Twas not a bark, twas not a hooker He saw at once: The Gobbledeegooker A Hellish sight for a man most frail His flesh turned fast from peach to pale He ran upstairs to avoid a squabble From downstairs it came: "Gobble, gobble, gobble" The man he ran into his room To avoid most certain turkey-doom To see a picture above his bed He slowly but surely swiveled his head Within the frame lay sweet lady Ella A gorgeous catch for any young fella But alas, she left him, when his pockets grew bare And he sat day after day in his frayed easy chair But Ella, sweet Ella, she made his eyes moist Perhaps she'd have stayed had their problems been voiced? Oh Ella, fair Ella, indeed such a looker Came rapping at the door: The Gobbledeegooker The man dashed at once to his balcony door His nerves were so shot, he could stand no more His bedroom door, meanwhile, that he once did cobble Tore open with fury: "Gobble, gobble, gobble" Outside now at last, he climbed with his might To escape to the roof, to escape from his plight The shingles his father had applied here by hand Upon them our man did shakily stand He thought quickly of father and mother, so sweet Of this house that they built; a splendid retreat And oh how they loved him, their bundle of joy Oh father and mother and their innocent boy The man peered off downwards to the ground now below To jump now meant death on that grassy plateau Up the side came the beast, the man felt like a snooker He'd been cornered and trapped by the Gobbledeegooker The man thus did scowl, the thing didn't belong His beak as pronounced as his waddle was long He realized a jump might make him hobble The monster just laughed: "Gobble, gobble, gobble" The air whooshed around him as he made his descent He thought to himself of his life's great lament But softly he spoke to himself as he thought: "My life may be gone but what wonders I've sought" "A mother and father who loved me so well And a wife I loved too, she treated me swell I've lived through such wonders, seen rockets and tanks My life was lived well, and for that I give thanks." His body did fall to the ground with a crash In a moment a life was snuffed out in a flash And up on the roof, like a pressure cooker Came the thunderous tweet of the Gobbledeegooker The bird of prey wondered just why the man fled The Gooker just wanted to come and break bread To celebrate thanksgiving as his turkey legs wobble The Gooker just shrugged. "Gobble. Gobble. Gobble."
Posted by Satia at 10:13 AM

Email ThisBlogThis!Share to TwitterShare to FacebookShare to Pinterest
Labels: thanksgiving