In Which I Read Another Book Group Young Adult Novel 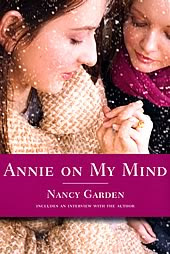 Because the book group is reading young adult novels this month, we had three books from which to choose. I had hoped to read all three but was unable to find the third. I could have ordered it online but in order to justify doing that, I would have had to spend $25 so that the shipping would be free. I was able to buy two of the three locally so I will only read the two. I have a feeling that I won’t be the only one who didn’t read all three because most of the time I am one of the few who has finished the one book.

I’ve already written about one of the books. Annie On My Mind by Nancy Garden is the second of the three. (The third, for those remotely interested is Kissing Kate by Lauren Myracle.) I definitely prefer this book over Luna. I immediately liked the characters—Liza (short for Eliza) and Annie. They meet at the Metropolitan Museum of Art and go to two of my favorite exhibits—The Temple of Dendur and the Medieval art section. (Later in the novel one or both go to other various and very familiar haunts like the Guggenheim, the Botanical Gardens, and even the Museum of the Native American.)

I suppose that because the novel takes place in NYC, I am somewhat biased in its favor but I can’t say that this always works in a writer’s favor. After all, I know what home feels like and if in writing about my home you can’t get it right I will feel disconnected from the story no matter how well written it may be.

My biggest complaint about the novel is that it is incredibly predictable. As each character is brought onto the stage of the unfolding story I knew what role they would play. No surprises at all. Luckily, a novel doesn’t have to surprise to satisfy. I was interested enough in and by the characters that I kept reading with enthusiasm. The details were enough to keep me from thinking that the author was trying too hard and the characters did not slip into anachronistic allusions or slang. Although this book was written quite some time ago, the story feels contemporary.

How often can one say that about a young adult novel published 25 years ago? Not often. I am grateful to see that feminism has made a difference when I read L’Engle’s Time Quartet and don’t get me started on Lewis’ Narnia girls.

The edition I have includes an interview with the author. It is interesting to see how Garden’s own life and love of literature influenced her own writing. What is remarkable is that Garden had an agenda when writing this novel. Usually when an author goes into a project with a moral to tell or an ax to grind, the story is clouded with pedantic lessons hammered home through the characters’ story. However, Garden succeeds where so many fail. She has a reason for writing her novel, a desire to write a story of young lesbian love and she succeeds.

If the ultimate compliment is to say that the author left me wanting to know more about what happens to the characters then I must commend Garden for doing just that. I wanted to know what happened to Liza and Annie after I closed the book. Where do their lives take them and what happiness will they experience? I said that the reason I didn’t appreciate Luna is that I didn’t care at all about the characters. I further suggested that this made my response to the book rather superficial. I suppose, by implication, my liking Annie on My Mind because I like the characters is equally superficial. *shrug* So I’m superficial. I’ve been called worse.
Posted by Satia at 11:45 AM No comments:

In Which I Can't Type

My computer has decided that my keyboard doesn't exist. I'm still convinced it does but I haven't been able to persuade my computer. That may change but I'm not holding my breath. In the meantime, I'm going to just be offline until we can get my computer to listen. I'll be updating eventually about the snow we had, about the tantric yoga discussion to which Rob and I went, about tomorrow's movie date, and Sunday's book group. I also have a book review ready to be posted and possibly another by the end of today. And, of course, updates on doggy goodness. Unfortunately I lack the patience to use Rob's computer and I am afraid of Marc's computer and my laptop doesn't believe in downloading websites let alone allow me to upload blog posts.
Posted by Satia at 9:06 AM No comments:

In Which It Snows AGAIN!

Let me state for the record that it rarely snows in GA so when it snows twice in one week one can only imagine that hell has indeed frozen over. Naturally this meant more playful puppiness.

I urge you to spend 2008 turning all of your pretty good but half-developed notions into a few brilliant, fully formed ideas. While you're at it, melt down your hundreds of wishy-washy wishes and recast them into three driving desires. This is the Year of Pinpoint Aim, Aries, also known as the Year of Lasering Your Focus and the Year of Seeing with Fierce Clarity. Psyche yourself up for a major campaign to cut the crap so the essence can shine.

In Which I Write About Puppiessssss!

Today I looked at the paperwork that came with the puppy and realized that her name is Snowdoll, not Snowball. Ummm . . . now the question is do we change her name to what the paperwork says or do we call her what we’ve been calling her?

She has been here, a part of our family, for only a week and already she has claimed her sleeping territory. Like Romanov, when she is ready for bed she walks to her sleeping place and just plops down. No need to wait for the humans to go to bed.

And she is doing better with the housebreaking process. We have had two nights with no accidents and she is very good about using the puppy pads we’ve spread in the areas she most likes to use. It also helps that she knows where she goes “outside” and she now will walk over to the door and expect us to read her puppy mind.

In fact, we have begun putting down fewer pads for her so her area is already getting smaller and hopefully we will have no more reason to have pads anywhere.

We’ve had to put both into the crate while we went out. I don’t know if Romanov has howled while we are out but we did notice that he doesn’t bark at us (one or two serious woofs, usually) as we are walking out the door. I am hoping that they are snuggling down together and just taking the time to sleep. I am thrilled to say that there are no accidents when we get home and both have eagerly run to the door to go outside as soon as we get home.

There is still some learning to do. I let them utterly exhaust me yesterday but Rob showed me that this was partially my own fault and I can make them lie down. I have also been able to do my yoga in the morning. Snowball has even learned that this is a part of “our day” and she will lie down either under the coffee table (aka the puppy table) or near Romanov.

I am a little worried about her sneezing. She has been sneezing lately and I don’t know if she is unwell or just a “natural” sneezer. I’ve checked her nose and eyes—wet and cold and bright and clear. I think she’s okay and just . . . well, sneezy.

Oh yes . . . and she’s now officially on solid food, no rice. Yaaaaay! And of course, pics and then some!!!


Snowball made me bleed but I forgave her. 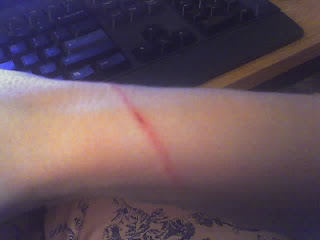 Romanov thinks Snowball is fascinating and watches her a lot.

We call this "The Turtle." It is one of her favorite lying down positions. 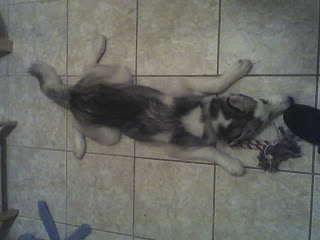 And this is a video of her gnawing on a piece of rawhide.


And last but not least, she is no longer wearing the harness. We kept it on her for a sense of her own security. On Friday we bought her a brand new collar. I'd show you her tags but Marc took a picture of them and still hasn't emailed them to me. Anyway, by Saturday afternoon the collar was broken. So we went back to the store and replace it because obviously the first one was defective. Or so we thought because by Sunday she'd broken that one. She now has a purple mesh one which we will replace with a leather collar later, when she is less hard on them. (I am eyeballing a very snazzy red patent leather one with a dangling rhinestone heart. I think it will look very pretty on her.)
Posted by Satia at 11:19 AM 2 comments:

In Which I Finish a Reading Group Novel

I read Luna, by Julie Anne Peters , for the book group and was excited by the concept. Brother, Liam, is transgendered and is slowly transitioning himself into Luna. The protagonist, Regan, is his loving sister. Obviously there would be conflict with mom and dad as Liam became more comfortable with becoming Luna and issues that would ripple beyond the home and into school, etc.

The problem is that I didn’t like any of the characters. Regan was boring. Luna narcissistic. The parents willfully oblivious and even potentially hateful. The dysfunction in this family was what completely turned me off because the implication is that only a boy raised in such a screwed up environment would not be able to accept his sexual identity and gender roles.

Ultimately, this book did not live up to its potential. And the climax towards the end of the book is resolved in such a cliché and unsatisfying manner that I honestly felt as though the author had written them all into a corner and was taking the easy way to get them out of it. Also, every character has waggly fingers. The adults waggle fingers at the children. The girls waggle fingers to flirt. I think at least five different characters waggle at one point or another.

My expectations for young adult literature are fairly high because I am very aware of the potential to really address some important social issues between the pages of a well written and thought out book. In the end, I didn’t think that this was either. But I commend the author for taking on a very ambitious and controversial subject and trying to present it in a manner that allowed the reader to be sympathetic. I’m sure that had I liked the characters more I would have liked the book much more. We may not be able to pick our family members but we can pick our friends and I wouldn’t have chosen any of these people to be my friend. A very subjective reason not to like a book.
Posted by Satia at 1:12 PM No comments: