In Which Life is a Roller Coaster

It has been a roller coaster couple of weeks. Last week I got hit with very bad news. Then earlier this week I was given some very good news. Then last night more bad news. It is exhausting. As is the weather. It keeps dipping and rising between spring loveliness to bitter cold. Even my weight is about these same two pounds—gaining and losing the same pounds month after month since May. Everything is up then down. So today is down.

Aries Horoscope for week of February 7, 2008 "Men should be barred from holding public office for 100 years," says billionaire Ted Turner. "Men have been running the world for too long and they've made a mess of it." If women were in charge, he adds, "It would be a much more peaceful, prosperous, equitable world in a very short period of time. You'd have a huge shift away from military budgets and into education and health care." I agree with everything Turner said except when he implied that men should be prohibited from serving. That's totalitarian, the exact opposite of what I trust a feminine majority would usher in. From an astrological perspective, by the way, 2008 is prime time to move forcefully in the direction of bringing more women into power. And it so happens that Aries people of both genders are best able to lead the way. To jumpstart your ability to fulfill this potential, I urge you to take three actions in the coming week to foster female authority. Men, you may devote two of these to boosting your inner woman.

In Which I Finish Another Reading Group Book

After the first ten pages, I had to close Stone Butch Blues because I was fighting back the tears. When I finally closed the book, having read it all the way through, I was again close to tears. I can't number the times I found myself reading through my tears as I read this harrowing, sometimes horrifying, but ultimately heroic novel.

And this is a novel written in the first person which has a lot to do with why I felt such anguish. Remarkably, I never felt myself thinking, "This is only a novel." Instead, I kept thinking to myself, "I don't want to believe it was like this but I know it was. I know it is." Leslie Fienberg, in creating the protagonist, creates a character so sympathetic that only a truly stoney hearted person could not possibly feel these blues. I found myself repeatedly identifying with the emotions I was reading. If the details of experience was different, the overall fear, confusion, frustration, and doubt were all familiar.

Jess Golberg's sexual identity and expression are sympathetically portrayed, so much so that I wish this book were required reading. I remember growing up around homophobic people and not understanding why they were so angry, so hostile, so intolerant. A novel like this could be so entlightening for some. Not the die hard haters but those who are on the fringe, the ones who are letting their confusion or even fear manifest as anger and hostility.

I would never have read this book if it had not been that it was chosen by the book group. Of all the books we have read this was the first in which I was completely disinterested and the first that blew me away. This is Feinberg's debut novel and, frankly, it puts Lemus' in perspective. Lemus' writing is perhaps more poetic and the story slightly less melodramatic but I never fought back any tears and I never felt connected to the characters on an emotional level. While I am still curious to see where Lemus' writing goes I am biting at the bit to read Feinberg's next novel. Thankfully, that is also one of the books the group has chosen and I fully intend on starting it today.

MILD SPOILER ALERT:
At one point in the novel the narrator is put into a mental institution by her parents who cannot understand their daughter's desire to wear men's clothing. Jess, the narrator, explains that after three weeks of confinement she had learned the system of being there and that her parents do not love her. I found myself disagreeing with this. I was angry with the mother and father for the complete inability to cope with their daughter's truth. I wanted to shake them for being ignorant. But I also knew that their choice to put their daughter into a mental hospital was not an act of hatred so much as it was a failed attempt at love and protection They didn't and couldn't know better. Not at that time. One would hope that they would have wanted to know better, to be more sympathetic and compassionate. Still, when Jess leaves home and never looks back, it doesn't surprise me. I couldn't possibly blame her for having to make that impossible choice. It was the character's only way to survive.

And see? I have tears now in my eyes as I imagine the hundred and thousands and possibly millions of young men and women who are forced to make these impossible choices. Staceyann Chin, a brilliant poet, discussed on Oprah the homophobic atmosphere in Jamaica. At one point during the interview she talks about her sense of being exiled from her home, her roots. That we live in a world where anyone has to feel this way because of love is heartbreaking. If it doesn't break your heart then I hope you find something that will because this should. This should shatter it into Humpty Dumpty pieces--this awareness that the world still wants to hold onto hatred when there is so much abundance of love waiting to be experienced.

In Which There is HUGE News!

Yesterday I had a physical therapy appointment and it looks like we are coming to the end of my treatment. Mostly we talked but what we talked about was, aside from the usual assessment of how I am feeling, included such things as: Other exercise. Like walking more. Like going to walk where there are crowds. Like relearning how to drive by going to a parking lot and literally starting where I began with learning how to drive. She even suggested that I should take driving lessons to help me feel safer and more secure. As for returning to work, slow and steady. She thinks it would be best if I were to start with a part time job and gradually increase my hours. Start with four hours a day or work only two or three days a week. (This is all great news but it has come about three months too late, financially speaking, and I am feeling an incredible amount of pressure to work, to earn as much as I can as quickly as I can.) The physical therapy exercises are all dropped although I may still need to do the one I dislike most occasionally. Also, many of the yoga exercises I was doing are part of my yoga routines. Almost every yoga routine will include tadasana and virabhadrasana I and II. I guess in a way I will continue doing what I have been doing but not within the same context. Today I need to call my mother and tell her the incredible news. Then I need to do my morning yoga. Later, I will likely put the dogs in the crate to go out for a walk. And throughout the day, I’ll be updating my resume, uploading it to the usual job search sites, and getting ready to return to the real world beyond my home.
Posted by Satia at 9:34 AM 4 comments:

In Which I Finish Another Book Group Novel 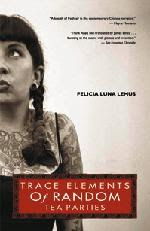 I love Jeanette Winterson’s novels. I recently read her first published novel, Oranges Are Not the Only Fruit. I was disappointed because her later writing is so extraordinary that her first foray into writing was not nearly as bold or brilliant. Still, I could see hints of what was to come and had I read her first novel before reading anything else she’d written I would have very likely read her later works to see how her talent developed.

I feel the same way about Felicia Luna Lemus’ Trace Elements of Random Tea Parties. The writing is good and there are hints of brilliance, the occasional metaphor or sentence that just shakes me to my core. The first person narrative is done well, a clear tone and voice established from the very first page of the novel. But because this was the first novel by Lemus, I felt slightly cheated, as if I had gone to a strip club where the girls undress behind a backlit screen. I can see the shadows but the two dimensional potential is not enough to satisfy.

I would be hugely surprised if I were to read a more recent example of Lemus’ writing and didn’t close the book exhausted with the perfection of her prose. It’s all there, implied in the pages of Trace Elements but implication is not fulfillment and I will have to wait until I have time to read something more from Lemus before I can finish reading with a sigh of true contentment.
Posted by Satia at 11:06 AM No comments: