There really isn't any story behind this poem beyond the fact that I remember reading it and just smiling. I think any woman can find something to enjoy about this poem. A celebration of being a woman. And below is a link of the poet reading the poem. A weekend bonus.

homage to my hips

by Lucille Clifton http://www.poets.org/viewmedia.php/prmMID/15599
Posted by Satia at 8:24 PM 2 comments:

From "Two Hangovers" by James Wright.

Number Two: I Try to Waken and Greet the World Once Again In a pine tree, A few yards away from my window sill, A brilliant blue jay is springing up and down, up and down, On a branch. I laugh, as I see him abandon himself To entire delight, for he knows as well as I do That the branch will not break.

This is the poem my mother and her husband (my step-father) had on their wedding invitations. Years later I did a cross-stitch for my step-father with a blue jay on a branch and the last line of this lovely poem.
Posted by Satia at 9:29 AM No comments:

It is hard for me to choose only one poem by this poet. There are so many which sing so beautifully. This is one of his more popular/accessible so I suppose this is a logical choice.

somehwere i have never travelled, gladly beyond any experience, your eyes have their silence: in your most frail gesture are things which enclose me, or which i cannot touch because they are too near your slightest look easily will unclose me though i have closed myself as fingers, you open always petal by petal myself as Spring opens (touching skilfully, mysteriously) her first rose or if your wish be to close me, i and my life will shut very beautifully, suddenly, as when the heart of this flower imagines the snow carefully everywhere descending; nothing which we are to perceive in this world equals the power of your intense fragility: whose texture compels me with the colour of its countries, rendering death and forever with each breathing (i do not know what it is about you that closes and opens; only something in me understands the voice of your eyes is deeper than all roses) nobody, not even the rain, has such small hands e.e.cummings

When I was briefly engaged I had suggested that we include this poem in our invitations. My fiance, after reading it, said that he didn't get it. I should have recognized then and there that something significant was missing in how we read the world. I am grateful for his finally telling me the truth and freeing me to find something more.
Posted by Satia at 5:45 PM 2 comments:

In Which I Fail at Riding and Writing

I tried to use the exercise bike today. Tried didn’t even make it past my setting the program I wanted to use. As soon as I had plugged in “Rolling Hills” (harder than "Ride Thru Park") and Level 03 (with some idea that I would probably drop that down to Level 02) and how long (30 minutes) and my weight (not telling!), I had to get off because I already felt enough discomfort to know that my using the bike was simply not an option.

I’ll have to try something else later, hopefully find something that doesn’t irritate the area. Perhaps some weight training or belly dancing. I know yoga is not yet an option. Very frustrating.
Not nearly as frustrating as writing. I was literally close to tears of anger. Every line felt like torture. I made several false starts for two stories, three poems, and even one essay. It doesn’t matter if I have a lot of “good ideas” if, when I sit down to write them, everything I write sounds uninspired and dull.
Which is why I share this image, of a belligerent angel. I mean, look at the angel on the right. If you were to have a guardian angel watching over you, is this how you would want your GA to look? The one looks far more gentle but I think that the pair could be viewed as two manifestations of the same being. Sometimes comforting and other times cross. So it would seem my muse is all the way on the right at the moment, not making my writing any easier than my bike riding. 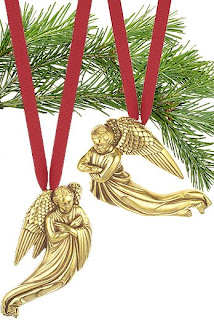 Today is the first day of National Poetry Month. (It is also the 20th anniversary of my moving to GA and the rebirthday of my being baptized as an adult. But I digress.) I am going to try to share a poem a day for the month of April. I hope you enjoy. Most of the poems will have a personal meaning for me which I hope to also share.
Harlem Langston Hughes
What happens to a dream deferred? Does it dry up like a raisin in the sun? Or fester like a sore— And then run? Does it stink like rotten meat? Or crust and sugar over— like a syrupy sweet? Maybe it just sags like a heavy load. Or does it explode? I read this poem before I had determined to go to college and I returned to it often during the months that led up to my decision. What happens to a dream deferred? When I first read this I had no answer because I could not tell you what my dream was for my life. I had lost my ability to dream. I was so stuck in my daily life that I had no vision for my future. And I felt as though I would do all of these things--dry up, fester, run, stink, crust over, sag, explode. Above all else, explode.
Posted by Satia at 11:52 AM No comments:

I saw my surgeon today for my post-operative exam and he says I am healing well (which I already knew) and that the lymph node did not show anything alarming. It was, however, 1.4 cm which is not necessarily freakishly large but this particular lymph node had swollen from its previous smaller size and was now protruding making certain things less comfortable. For the record, the incision has made the very same things less comfortable so the only improvement in my situation is that the incision will heal and eventually cause me no discomfort.

Per wikipedia: Human lymph nodes are bean-shaped and range in size from a few millimeters to about 1-2 cm in their normal state. They may become enlarged due to a tumor or infection. White blood cells are located within honeycomb structures of the lymph nodes. Lymph nodes are enlarged when the body is infected due to enhanced production of some cells and division of activated T and B cells. In some cases they may feel enlarged due to past infections; although one may be healthy, one may still feel them residually enlarged

So that’s the final outcome. Do I seem completely unsurprised? Well, I am. Unsurprised. This is the third time I’ve had this type of procedure done and I don’t really expect any profound enlightenment from the experience.
Posted by Satia at 10:46 AM No comments: