I belong to a book group that focuses on lesbian literature and I have been campaigning to read Audre Lorde. One of the members said that if she had to read poetry she would kill herself, or something to that effect. Although I have pointed out that Lorde has written a novel and a memoir as well as poetry, I seem to be the only one interested in reading her works. I don't know why. Perhaps after reading this, you can tell me why anyone would not want to read her writing. On a Night of the Full Moon I Out of my flesh that hungers and my mouth that knows comes the same I am seeking for reason. The curve of your waiting body fits my waiting hand your breasts warm as sunlight your lips quick as young birds between your thighs the sweet sharp taste of limes. Thus I hold you frank in my heart's eye in my skin's knowing as my figners conceive your flesh I feel your stomach moving against me. Before the moon wanes again we shall come together. II And I would be the moon spoken over your beckoning flesh breaking against reservations beaching thought my hands at your high tide over and under inside you and the passing of hungers attended, forgotten. Darkly risen the moon speaks my eyes judging your roundness delightful.
Posted by Satia at 10:53 AM No comments:

This has been a very hectic week. Our little girl has become a woman and as a result I've been on Virtue Patrol, trying to protect her from unwanted attention. We are all exhausted as a result.

This is a video of Snowdoll barking at me. She is on my comforter. Now, when she first joined our family there would be times when I would walk into my bedroom and discover my comforter on the floor. I blamed Rob, my carelessness, and gravity. At first. I also guessed the perhaps Snowdoll was jumping up and off the bed and causing the comforter to fall to the floor. Later I learned the truth that Snowdoll has issues with comforter and will happily spin herself into a dervish frenzy as she attacks the offensive thing.

So now the mystery of why my comforter keeps landing on the floor has been resolved. Now if only we could figure out how to fully protect her virtue, our lives would be much more peaceful.

A reader from Fiji is encouraging me to pay a visit. "Fiji is heaven on earth," she says. "You'll be ecstatic here." While I have no doubt that's true, it's hard for me to imagine being any more ecstatic than I am when I travel to Hawaii. It, too, has resemblances to paradise. And the plane flight there takes five hours less and is $600 cheaper than the jaunt to Fiji. Do I really need a more heavenly heaven on earth than, say, Waimoku Falls Trail in Maui? I expect you're facing a metaphorically similar situation, Aries. The question you may want to ask yourself is this: Should you pine and aim for a state beyond perfection, or will mere perfection serve you just as well?

Email ThisBlogThis!Share to TwitterShare to FacebookShare to Pinterest
Labels: Snowdoll

I suppose that if you were to ask my children, Marc in particular, what poetry they remember from their childhood they would very likely say Shel Silverstein's Where The Sidewalk Ends. That would, however, be incorrect, because I read to them from A. A. Milne before I ever read to them from Silverstein. In fact, I know for certain that my first exposure to poetry was Milne's works: When We Were Young, Now We Are Six, and of course, Winnie-the-Pooh and The House at Pooh Corner.

When I was One, I had just begun. When I was Two, I was nearly new. When I was Three, I was hardly Me. When I was Four, I was not much more. When I was Five, I was just alive. But now I am Six, I'm as clever as clever. So I think I'll be six now for ever and ever.
Posted by Satia at 10:25 PM No comments:

Anyone who has studied American Literature or British Literature has probably read T S Eliot. Most famous for his epic Wastelands, when he died he said his masterpiece was, in his eyes, The Four Quartets. Before I read about Eliot's preference, I had already fallen in love with these four brilliant pieces of work and although there are many short poems I return to again and again, I read The Four Quartets at least once a year from cover to cover. What follows is perhaps the most well known part of this longer piece. from Little Gidding We shall not cease from exploration And the end of all our exploring Will be to arrive where we started And know the place for the first time. Through the unknown, unremembered gate When the last of earth left to discover Is that which was the beginning; At the source of the longest river The voice of the hidden waterfall And the children in the apple-tree Not known, because not looked for But heard, half-heard, in the stillness Between two waves of the sea. Quick now, here, now, always-- A condition of complete simplicity (Costing not less than everything) And all shall be well and All manner of thing shall be well When the tongues of flames are in-folded Into the crowned knot of fire And the fire and the rose are one.
Posted by Satia at 10:55 PM No comments: 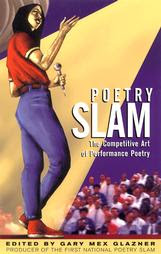 For those whose exposure to poetry slams has left them thinking that there is more performance than poetry involved in writing for poetry slams, Gary Mex Glazner’s Poetry Slam: The Competitive Art of Performance Poetry is a strong argument against so narrow an interpretation of slams. An anthology of works by various artists, this collection includes brief essays that describe the slam experience from writing to performing, from touring to competing. While not exhaustive, there are few surprises in which poets are included. Anyone who has watched Russel Simmons’ Def Poetry will recognize many of the names but most of the collection will introduce new artists. This is a good addition to your poetry collection if you want to read contemporary poetry that is not necessarily recognized by academia. But don’t let that scare you off. At least one of these poets has been published in Poetry Magazine.

It is a challenge to cull one piece from an anthology because there are so many different poems with so many themes that trying to choose one as representative of the whole is like saying, “This is what I look like” and showing you my finger and nothing else. Still, I wanted to share something and so I chose this piece, and angry and political poem. As you read, notice King’s choice of punctuation and capitalization, or lack thereof.

Bring Them Back
Lisa King

i would roll in the semen of a thousand dead brothers
i will tongue kiss a million prostitutes
drawing the last drop of saliva from behind rotting teeth
i will suck blood out of the syringes of every dusty junkie
i would stitch my skin onto all the quilts
that stretch from here to washington d.c.

the truth about AIDS is
if jesus were here today his blood would be tainted
and you would call him
unclean
jerry falwell
you would call him
enemy
pat robertson
you would both try to raise money
to buy the nails
Posted by Satia at 7:29 PM No comments:

First, I suppose I should mention that there is a poetry-a-day challenge taking place at Robert Brewer's website for Writer's Digest and that he chose one of my offerings for his Day 5 highlights. I am still keeping up and I've been dragging my notebook around with today's prompt in hopes of having a flash of inspiration. Second, here is today's poem. It is a traditional poem from a Native British Columbian tribe. The following has been translated by Carl Cary.

When I was going through my separation and then divorce, I had a tremendous crisis of faith--in myself, in my understanding of how things work, in everything. I shared this poem with someone I considered a mentor and she wrote to me: "Keep walking and shining." I was not getting a lot of encouragement at the time and her words were tremendously important to me. So thank you, Dr. Dorothy Graham, for saying the right thing at a time when everyone else was either telling me to stop or not saying anything at all.
Posted by Satia at 4:41 PM No comments: