Learning to Fall by Philip Simmons 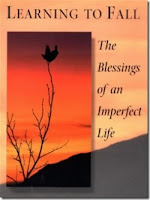 Learning to Fall: The Blessings of an Imperfect Life by Philip Simmons has been hiding on one of my bookshelves for a while. I picked it up on a whim before I was hit with vertigo. Then, when I was able to read again, I avoided the book because the title was simply too ironic. But after reading some wonderful spiritual memoirs and essays lately I thought now was the ideal time for me to explore Simmons’ book.

Simmons was diagnosed with ALS and the entire time I was reading the book I was aware that the disease had very likely already taken its toll on his life. When he describes the inevitability of his being unable to feed himself, there is a certain sympathy I inevitably feel because I remember how dreadfully frightened I was of what the vertigo signified and how far my degeneration might go. However, I was reading it after I was assured that it would not be as bad as some of the threatened diseases (MS, among others) might have been.

These essays are nice but they lack the humor and vulnerability of Lamott’s Grace Eventually. Nor was it as clearly organized as Eat Pray Love. So in the end, I felt a little let down by the book. I loved the idea of the book, the idea of falling, of living with the grace of imperfection. I think I would have learned more from this book if I had not already lived through so much of it, if I were younger or less experience or something. And I almost feel guilty for not feeling more attuned to Simmons and his experience, for not wanting to rave about the book. Truthfully, it is not a bad read. It’s just not a great one. *shrug*
Posted by Satia at 3:39 PM 2 comments:

As June arrives, the end of my Buddhism exploration draws closer. Come July 1st, I am supposed to begin looking at another spiritual path. Originally, I had thought to return to a more Western religion. Having gone from Catholicism (Western) to Buddhism (Eastern), it seemed a natural and even logical move to make. However, I am not sure that is what I want to do. On the other hand, I can’t say for certain what it is I want to do. So, in the grand tradition of creating online polls, I figure I will let someone else decide for me. After all, Catholicism and Buddhism were not actually my choices when you get right down to it. The latter was the original choice made by Saila but then was changed to the former. So when the two of us “finished” Catholicism, and she chose to continue with it, I moved on to Buddhism. Here are the choices that present themselves at this time and why each appeals to me. A Course in Miracles This is almost the most logical choice because much of ACIM is a sort of convergence of Christianity and Buddhism. It is also unique from them both, not quite a marriage of thought as it is building from a foundation laid by both. Islam This would be a good complement, building on the Catholicism in many ways. Also, I have wanted to read the Qur'an for a while. I have read parts of it but not cover to cover. However, I am fairly confident that I would not come out of this experience wanting to convert. Tantric Yoga This is a natural choice as well as it builds on some of the Buddhist thinking because Tantric Yoga encourages meditation and other disciplines. On the other hand, Tantric Yoga teaches that enlightenment is realized through the body and not in spite of it. Mormonism This would be the sharpest departure although the tone of The Book of Mormon is very similar to the Bible. Stylistically, this would not be very different from Catholicism although the teachings would be very different indeed. Taoism Much of Buddhist teaching is rooted in Taoism. I would probably want to incorporate the I Ching along with Taoism because The Tao Te Ching is not a very long text although it is dense. Hinduism Truthfully, I don’t know if I am ready for this one but I have a copy of the Rig Veda and I know that eventually this will be something I want to study. The challenge will be reading and keeping track of a rather complex faith system. Of course, if anyone wants to join me, you are welcome to do so. Otherwise, I will go it alone as I did with Buddhism. I will create a poll which will appear in my blog and I will also open this up as a question elsewhere. (Also, if you think you would like to join me in this in January and you see one of the above as attractive but not now you could vote for something else this time around and join me in January.)
Posted by Satia at 5:26 AM No comments:

In most Asian practices, tracing one’s lineage is an essential part of passing along the teachings. This is true of Reiki. Here is my lineage, as given to me by my Reiki Master Brad Dixon:
Mikao Usui Chujiro Hayashi Hawayo Takata Phyllis Furumoto John Lacks Annie Star Cynthia Rose-Young Adrienne N Cobb Claudia Storms Amy Weeks Brad Dixon Satia Renee
I would like very much to move towards the Master level of Reiki. However, I do not wish to do so until I have had more experience with giving Reiki to other people. It is a dilemma because it isn’t like I can tie anyone down and make them lie there while can give them Reiki. On Tuesday, I set up the massage table. I thought maybe seeing it in the great room would encourage the other members of the household to slow down and let me give them Reiki. In the meantime, as a part of my winnowing out books from my life, I have one on Reiki that I want to read and then send to my mother. Ultimately, I think I’ll end up with two books on Reiki. The Japanese Art of Reiki and Reiki for Dummies so far are the most useful resources I have found. Aside from my manual, which I received when I was attuned, I don’t think I’ll be buying any more Reiki books.
Posted by Satia at 8:11 AM No comments: