This Time I Nearly Cried

First came Buster's family. (Buster formerly known as Brownie.) It was lovely to see Buster's new mommy just light up as she held him. He sank into her arms and then did what he does--tried to go have some fun. 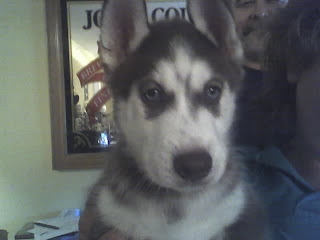 Not long after they left, in came Sarah's family. She was sleepy, just wanted to go back into the kitchen to lie down on the cool tile. Of course, as soon as I tried to take a picture, she started squirming. How do they know? 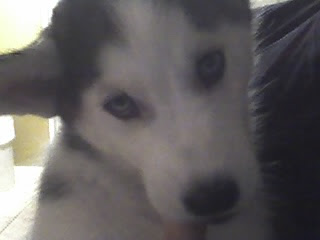 So that leaves only two more puppies and me . . . still able to say I haven't cried but today I came closer than ever before.
tomorrow i think my heart will break
Posted by Satia at 5:55 PM No comments:

So Sad to Say Goodbye

Two puppies left today--Snowflake and Tipsy. Although we have kept Snowdoll removed from the farewells, I think she is beginning to notice that there are fewer puppies than there were before.
And my bloody phone did not save the picture of Snowflake I had taken so I don't have the goodbye picture. I am seriously pouting and I hope that her family will take pictures and email them to me or Rob. (I guess that's a hint to any of the families reading my blog.)
But I did get this one of Tipsy. 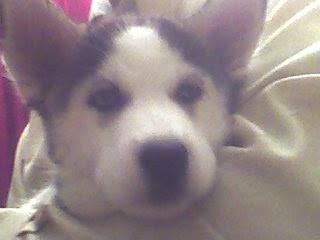 She is such a sweetie and I am going to miss her good morning kisses. But her new family said they might have to leave the country for a wedding and asked if we would mind watching Tipsy while they are away. I immediately said Yes, with all the implied enthusiasm. And then I remembered Rob. (Oops!) I back pedaled a bit. "Let me talk to Rob. I can't imagine he would mind but I need to ask him first."
I did and he said YES! Yay! So when the family goes out of the country for the wedding, we will have Tipsy to play with our Romanov and Snowdoll.
I would say that all of the families are more than welcome to use us for sitters if they should go out of town and prefer not to leave their puppy in a kennel but I guess I should at least ask Rob before I make such an offer. I think he'd appreciate it.
Posted by Satia at 8:44 PM 4 comments:

In spring, hundreds of flowers; in autumn, a harvest moon.
In summer a refreshing breeze; in winter, snow will accompany you.
If useless things do not hang in your mind,
any season is a good season for you.--Mu-mon
I remember when my children were growing up. I marveled at various stages of their lives, adoring the different developments of going from infant to toddler to child and beyond. "Useless things" in this quote means, in my understanding, any attachment. Rather than become attached to a particular experience or time, let each be what it is. Let the flowers give way to the harves and warm breezes to snow. And let puppies go to their homes where they belong. 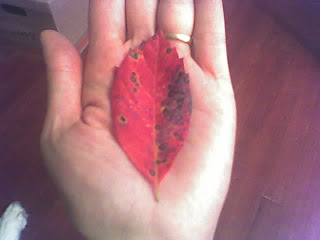 On the 19th, I found this leaf. It is only August. Isn't it entirely too soon for something this red? I only found the one. I think it is a hasty leaf and I brought it inside as a reminder to slow down. In Snowdoll news, today when all of the puppies were asleep and even Romanov was just lying around, she was playful and had a piece of rawhide which she was gnawing, tossing, and enjoying a great deal. She tossed it and it landed beside Romanov who just looked at it and didn't make a move to get it for himself. There was a time when, as she retrieved it, she would have taken a snap at Romanov. She did not do this. In fact, Rob and I have noticed a far more relaxed and confident puppy. She's not nearly as aggressive with Romanov as she used to be which is wonderful to see.

Aries Horoscope for week of August 21, 2008 Your next assignment is to inject more fun into your job -- or into anything that feels like work, for that matter. You've got a head start because lately you've been playing harder than usual. That should give you creative momentum as you reinvent your approach to activities that push you to your limits and test your resolve. For best results, be open to the possibility that you really don't have to keep being bored and cranky in places where you've assumed you will always be bored and cranky.

Shadow Has Left the Building

Today the first of the puppies went home. Shadow has left our little family. I don't think that Snowdoll has even noticed and that was one of our intentions in having the dogs leave one or two at a time rather than all at once. Truth is, though, they really aren't all ready to leave. There are three that could have left today but only one owner could come by so tomorrow the other two will go and maybe tomorrow we will see that another one or two are ready. 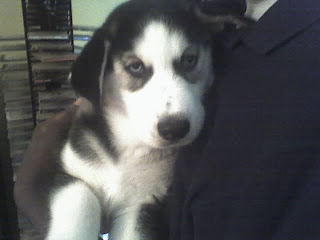 I took a video of Snowflake licking Shadow's ear. It was quite sweet but my phone is being capricious so I will have to upload it later. In other news, a bird has decided to use the nest. It is too late for eggs but when Rob walked in the door he was startled by a bird flying at him. I'm curious to see if the bird is still there tomorrow. In the meantime, I've suggested to the boys that they use the back door.
Posted by Satia at 9:38 PM No comments:

Happy Birthday to My Daughter!!!

Today my daughter turns *gulp* 26. When the hell did she get so old? She is amazingly talented. To see more of her artwork, including the inspiration behind the image below, you can check out her deviantart site or you can read her webcomic which is now in its third year! 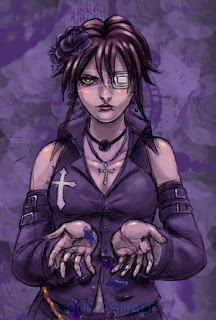 And today we are going to have pizza and tiramisu and have a lovely time as a family, puppies and all. Woohoo! 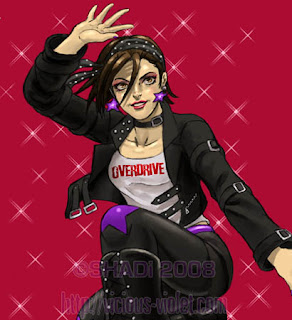 A father came with his two too adorable daughters. The younger one was horrified by Romanov so we took Snowdoll and Romanov into the other room and let the girls look over the puppies. I am not at all surprised that the older daughter fell in love with Snowflake.

Snowflake is her mother's daughter. She loves kisses. In fact, little Snowflake would see me and start jumping up, trying desperately to meet my face so she could give me kisses. She is possibly the most affectionate of the puppies and the perfect puppy for two little girls.

Email ThisBlogThis!Share to TwitterShare to FacebookShare to Pinterest
Labels: Snowflake

The Book of Joe by Jonathan Tropper 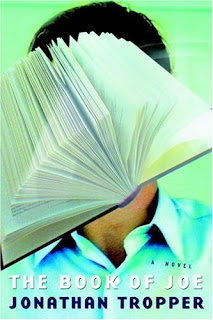 I bought The Book of Joe by Jonathan Tropper to give to my son, Joe, because it amused me. I had no intention nor any real desire to read it. But then one night, stuck in the guest room with nothing to read, I grabbed the book from the shelf and began reading.
Joe Goffman, the narrator of the story, has written a best seller, a novel not so loosely based on his life. After experiencing publishing and even Hollywood success, his life has reached a cross-road. It's time for him to grow up, frankly, and his wake up call comes in the form of his father's hospitalization. Going home after seventeen years, Joe is forced to face his personal demons, the ire of his community, and try to make peace with himself. The first part includes some flashbacks that contextualize the conflict that Joe is feeling. The second part concludes the various random threads and ties them up in an entirely too neat bow. Well, too neat bow for my taste.
Take Elizabeth Berg, add a dash of sarcasm and self-righteous angst, and you get the tone of The Book of Joe. Frankly, I never liked the protagonist, although I found his voice interesting enough not to give up on reading the book altogether. What kept me reading is that, while I didn't like Joe Goffman, I cared about the people who surrounded him. Ultimately, this is a coming-0f-age novel about an overgrown adolescent who, in his thirties, finally realizes that it is time for him to "man up." Not entirely unamusing. And not incredibly disappointing. But maybe I just don't get it or I might have liked it more. I did chuckle a few times. That's better than nothing.
Posted by Satia at 4:23 PM No comments:

Sarah was our last (but not least) puppy. Formerly known as D/Diamonds/Marita, Sarah's new home is ideal for such a sweet natured little girl.

A father came with his son and daughter. Although they really had no choice of puppy because all of the others had been claimed, I immediately felt the rightness of Sarah joining their home. He wants a dog for his family when he is not there and you can't go wrong with Siberian Husky for companionship.

He knows someone with a husky so he's aware of all the challenges involved in raising one and the more he said about why he wanted a puppy for his family, the more I wanted to say "You can take her now." Unfortunately, the puppies were not ready to go home yet but hopefully soon Sarah will be with the family where she belongs.
Posted by Satia at 2:45 PM No comments:

What We Won't Do for the Puppies

I an effort to encourage weaning, Rob and I are sleeping in separate rooms. He has the dogs, Romanov and Snowdoll. I have the puppies. All seven of them. Ideally, I would get a solid six hours of sleep a night. Realistically, I am getting five hours. Interrupted. At least twice. Usually thrice. I am exhausted. Yesterday the exhaustion hit me and I was in bed, fighting a sickness that wanted to overwhelm. So is it any wonder that when I saw that the puppies were still trying to nurse, even though there were TWO bowls of food out for them, I nearly cried? I am ready for them to go to their homes. I need them to go. They are now seven weeks and this coming weekend it would be nice if at least a few of them showed signs of readiness. I don't need them all to leave at the same time on the same day. But a couple of them going home would at least reassure me that someday I will get a full night's sleep again. Besides, there are seven families out there eagerly wanting to take their puppies home. I don't blame them. I remember when Romanov was still being weaned and how eager we were to have him mature. He, however, was ready at five weeks so our wait was not quite so long. *sigh*
Posted by Satia at 9:20 AM No comments: