I had a dream about the puppies last night. At least two of them. Not really about the puppies. It was about the owners.
So this morning I wondered, "Why Snowflake and Pinky? Why not Sasha or Tipsy? Buster or Sarah? Or even Shadow?"
Then it occurred to me, I haven't heard from the new family of Snowflake or Pinky. Everyone else has updated me in some way. Including one who sent pictures!!!
See? This is Sasha playing. 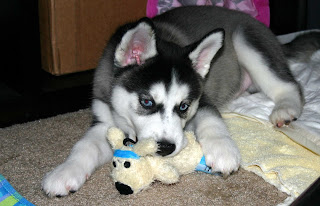 For those who were wondering, I think it's safe to say I'm still missing the puppies a lot. I know that no news is good news and nobody has come back, puppy in hand, announcing that they have changed their minds. It's just me . . . being silly and missing the lack of sleep and the mess and chaos and constantly laundry and . . . oh yeah. Maybe not having puppies around isn't so bad after all.
Posted by Satia at 7:44 AM 2 comments:

Up For Renewal by Cathy Alter

Up For Renewal by Cathy Alter is one of those quirky ideas that naturally appeals to my sense of the bizarre. Take one woman whose life is in a chaotic limbo. Add some good intentions for change. Mix in a plethora of magazine driven advice. Tada! You have this book. When I first read the premise about a woman turning her life over to women’s magazines, while appreciating the peculiar choice, I also had to roll my eyes at the inevitable self-destruction that would follow. What woman could possibly read a year’s worth of women’s magazines and walk away with her self-esteem still in tact? Although such magazines as Real Simple and O, The Oprah Magazine offered some balance, for the most part Alter was seeking wisdom from such resources as Glamour and InStyle. I kid you not! Month one, June, she gave over to eating more healthy meals which included her packing her lunch. I started falling love with Alter at this point. Her self-deprecating sense of humor was not so self-abusive that I felt uncomfortable. Her cultural references were often delightful. (Anyone who can make a correlation between learning how to wrap a sandwich with Kathy Bate’s greeting her husband in Saran Wrap in the movie Fried Green Tomatoes is aces in my book.) Come July, I began to have some doubts. She had dumped a couple of dead end liaisons for a potentially permanent playmate, a younger man she had kissed by the end of the previous chapter. So when they go off on a camping trip I was pretty certain it would make for an interesting experience. Not so much. Not even a very enlightening month. So I hoped that August would redeem itself. Yeah. Not so much. By September’s chapter, I was ready to just dump the book altogether. After all, she was begrudging one magazine’s “hinky’ math and claiming that she and her boyfriend had been dating for four months. Last time I checked, June to September does not equal four months. And for a woman who supposedly was trying to find herself and get her life together, why the hell was she thinking of moving in with her boyfriend of only a few months (not four, no matter how hinky your math may be!)? I think I am the only woman in America who still thinks moving in together can actually wait for the first anniversary of dating. That’s probably because I don’t read a lot of women’s magazines. Why did I choose to finish reading to the end? Because Alter’s book lends itself to my reading along while pedaling on my recumbent bike. Which resulted in my shouting out to Rob as he walked by, “Good Lord she’s already thinking about marrying the guy and it’s only been six months by her hinky math calculations. Or maybe it’s nine months. I’m not sure how this hinky math works.” The problem is that this book falls into the chick lit category and I am not a big fan of chick lit. I can’t completely hate anyone who suggests that “shitfuck” is a mantra. I suppose I like this book about as much as I liked Fielding’s Bridget Jones’s Diary. The only difference is this is a memoir and I always end up measuring memoirs by one simple question: After reading this book, would I want to know the author? I don’t know. I think I’d like to see her across a room at a party and just sort of watch her for a little while. Maybe sidle up beside a conversation she would be leading to overhear what she has to say and see if she is as funny in person as she is on the page. But I’m pretty sure I would want her to proofread my writing given her grammatical errors which were at least few and far between but still sadly evident. (Albeit, the conversational tone of the book may have been more important than grammar, an easy sacrifice to make when attempting to not sound pretentious with an aim at sounding familiar.) BTW, if there is a movie studio out there that hasn’t signed on to make this book into a movie then someone is missing out on a perfectly predictable but potentially charming chick flick. Just narrow down her various friends to either a ball busting girlfriend or a laugh-a-minute gayfriend and they can talk and shop and it will be oh-so Sex in the City only with a narrower focus. And Sarah Jessica Parker could even star in the movie version of Alter’s life. It seems somehow apropos. And sure I’d watch it when it comes on television. After all, I read the book, didn’t I?
Posted by Satia at 6:40 AM No comments:

I reread Wuthering Heights by Emily Brontë because it is one of those iconic books that I keep thinking I should like. My first time reading it was as an adolescent, when I went through a gothic novel period in all of my reading. It was possibly my first time preferring a movie to the book. (Sir Laurence Olivier as Heathcliff . . . sigh.) I read it again in my mid or late twenties to see if I had matured into appreciation. I also read Jane Eyre by Charlotte Brontë and walked away preferring the latter. As it turns out, third time’s a charm. I now know why I do not appreciate this novel as I feel I ought. I don’t like Heathcliff. Or Catherine. Or Edgar. Or anyone in the entire damn novel. I mean, not even Lockwood, the literary frame through whom we learn the generational story of love and revenge. What is there to like? Catherine is selfish and brutal. Heathcliff’s passion for Catherine is a testimony to love being blind. Edgar is either masochistic or codependent in his love of Catherine. And those are just the main characters for the first part of the novel. The second half doesn’t offer any redemptive characters although one might come to like Hareton if given an opportunity. I suppose the novel ends with some hope but I can’t hold any optimism for any of the characters. I was relieved to finish it. But more, I was relieved to have finally determined what it is I disliked about the novel. I can appreciate its position in the literary cannon. Appreciation does not suggest genuine liking. Next time I have the urge to revisit the moors, I’ll watch Oberon and Olivier in the abbreviated version of Wuthering Heights and be fully content. 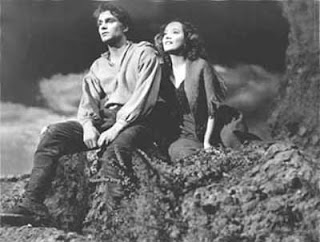