Morning My keyboard has been cleaned and there are only two keys giving me any trouble--f and enter. So far it seems okay. I may have to clean things out one more time to make sure they are less sticky but for now it is not too bad. Tipsy and I took a very short walk this morning. She just doesn't feel comfortable in our neighborhood. Mostly we walked around the lawn. She sat and watched some squirrels across the street. Then she wanted to go back inside. Of course she did! "Inside" are two big dogs ready to play with her. Well, really only one. Romanov just sees Tipsy as an annoyance. Snowdoll, however, is having a ball. As is Tipsy.
Posted by Satia at 9:07 AM No comments:

No Plot? No Problem! by Chris Baty 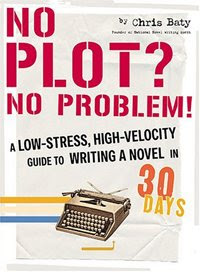 No Plot? No Problem! By Chris Baty is an irreverent look at the writing process as experienced through the NaNoWriMo challenge. Anyone expecting a serious look at how to write a novel, including the subtle points of creating characters, plot development, etc. will be disappointed. But let’s face it, the NaNoWriMo challenge does not take writing seriously and, given that this book is a sort of survival guide for anyone who wants to take up the challenge of writing 50,000 words in 30 days, it is clearly not Baty’s intention to write a thorough “how to write a novel” handbook. Instead, he sprinkles his text with anecdotes, advice, and strange allusions to monkeys and zombies. For anyone who has done NaNoWriMo several times, there really isn’t anything new here or even necessarily much useful. I wish this book had been published when I first did NaNoWriMo but it wasn’t. Oh well. There is some advice on how to revise the finished nanovel. I can’t say it is very useful advice because I haven’t tried it. The advice offered is broad and useful to ensure the pacing of the novel is consistent, that no extraneous characters are included, and that superfluous scenes are cut completely. However, for the nit picking line by line grammar and spelling checks, there is no advice. Nor is there any for how to recognize passive voice or inconsistent tense. Makes sense. There are many books out there that cover these things and Baty is offering advice to support his NaNoWriMo followers and not necessarily for the more serious novelist. I would definitely recommend it to anyone who is new to the NaNoWriMo experience.
Posted by Satia at 9:07 AM No comments:

Tipsy Lives Up to Her Name

Morning Last night as I was clickety clicking on the keyboard, Tipsy jumped up to see what was making the noise and knocked over my glass with lemonade all over my keyboard. Oops. I am using the dreadfully slow computer now. The keyboard is drying out. Hopefully by this afternoon I will know the status of the keyboard. And Tipsy's status? She was just barking at Snowdoll, trying to get mommy to play with her. Of course, as soon as Snowdoll gets up to play, Tipsy runs off, changing the rules from "lie there and let me bite you" to "you can't catch me!"
Posted by Satia at 6:21 AM 2 comments:

Already Home: Radiant Wisdom and Life Changing Meditation from Raman Maharshi Sri Nisargadatta, and the Teachers of the Advaita Tradition edited and interpreted by Gay Hendricks and Philip Johncock is the sixth book in the Transformational Book Circle. In spite of its lengthy title, the book itself is slender. The content, however, is rich. A collection of short teachings that invite the reader to pause and reflect, to think on the deep lessons being presented in only a few surprising sentences, I had a hard time finishing this book because I had to keep closing the book, savoring what I had read. Much as the first book delighted me, this book had me once again excited by the idea of the TBC collection. And all things considered, I’ve enjoyed three of the six books which is not bad, on average. I have not, however, liked any of the cds. Which is why I refuse to listen to the cd on this one. I want to just enjoy the book without having to review the cd and discover that, yet again, it is a superfluous addition to what could and should stand alone on its own merit. There are free downloads of some of Raman Maharshi’s teachings online.
Posted by Satia at 8:19 PM No comments:

Morning Although Tipsy still isn't thrilled with walking through the neighborhood, I get to jog back home every time we reach her puppy limits. Snowdoll broke off a piece of bone and Tipsy has claimed it as her own. She carries it around everywhere when she's not gnawing on it herself. And another solid night's sleep. I slept better as well, not as anxious about having a puppy back in the house. We're definitely having a fun time. Evening Tipsy's mommy and daddy beat me to the post before I could do an evening update. I blame my slow server for that because it simply would not send the video I wanted to upload. Yesterday I curled up on the couch while the dogs were all asleep and . . . oops. I fell asleep too. I woke up and Tipsy and Snowdoll were playing but I was pretty upset with myself for not waking up before they did. No. I was upset for having fallen asleep. So today Tipsy has a bell on her collar. I now cannot fall asleep without her waking me up. Ironically, I did not fall asleep today. I did catch her asleep however when I was lying down waiting for my allergy medicine to kick in fully. 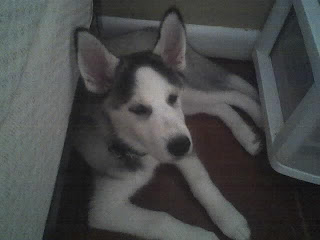 Obviously, she caught me taking her picture and woke up just enough to look at me and wonder what it was I was doing. Of course, the moment I put out my yoga mat, the dogs decided that sleeping was no longer nearly as interesting as running in and out of the kitchen. I finally gave up and, after picking up my mat, sat down at my desk. Tipsy came over to say hello but got distracted.
Posted by Satia at 9:02 AM 2 comments:

Buddha Boy by Kathe Koje is a lovely quick read. It is somewhat darker than Jerry Spinneli’s Stargirl but similar in that the protagonist’s life is turned upside down when he is forced to work on a school project with the weird kid. The author wastes few words and manages to explore such themes as perceptions and how our understanding of our world is influenced by what we “see,” friendships and redemption, jealousy and love. I could easily see myself returning to this book, to pick up on some of the more subtle foreshadowing.
There are few surprises as Justin, the average kid, gets to know Michael (the Buddha boy of the title). What surprises there are in this novel come as Michael's history is explained and how he comes to believe what he believes. Through Michael, whose spiritual name is Jinsen, teaches Justin is a basic Buddhist truism--everyone wants to be happy. This is never directly addressed. Whatever moral lessons may lie in the pages of this book reveal themselves without being stated outright. The title obviously suggests that there is some spirituality involved within the story and there is no denying that some Buddhism is mentioned but it is not detailed enough to convert anyone. Even the protagonist, after asking his father if they can visit a Buddhist temple, never goes to one. There is no discussion of meditation or the Four Noble Truths, although these are mentioned. And how Jinsen becomes a Buddhist is not typical of religious converts.
It’s nice to find a deeply spiritual character who is not trying to convert nor acting crazy. Odd that this should be refreshing, when one really thinks about it. It would be nice to see more novels in which spiritually strong characters are just like the rest of us, only different. You know . . . like the rest of us.
Posted by Satia at 7:35 PM 1 comment:

Morning: I thought I would update on how Tipsy is doing in case her family has a chance to come online and see what is happening. She is a little intimidated by the new neighborhood so taking her for walks is easier said than done. We go out the door and she waits for me to go down the stairs. She joins me at the bottom and eagerly stops because now she must give puppy kisses because she is quite proud of herself for navigating the stairs. But now she approaches the lawn with more than a little hesitancy because she doesn't recognize the smells or sounds. It's all quite new and more than a little overwhelming for a little puppy. I did get her to go for a trot last night but this morning she was having none of it. She refused to leave the lawn. So I led her out back where she could smell the familiar mommy and daddy smells and she relaxed. Still, when she saw the walk leading up to the front door, she finally trotted, eager to be inside. As I write this, she and mommy are playing tug of war. Oh . . . she had a good night's sleep. I think better than ours. Evening: Tipsy and I walked all the way to the corner by our fourth trip out. She doesn't, however, like the flag the neighbors have at the end of their driveway. When she sees it, she stops and looks at it wondering what it is going to do next. Here she is playing with mommy. If you can hear the growl, that's Tipsy--not Snowdoll.
Posted by Satia at 7:44 AM 1 comment:

Take a journal entry, preferrably one from a while back, and write a piece based on what you wrote back them. It can be a memoir type essay, a poem, a flash or short story fiction, or even an essay or article. 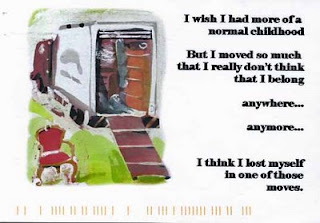 This is taken from postsecret. 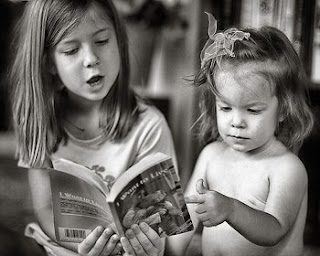 This photo is take from thejbird's site.
Posted by Satia at 6:17 AM No comments: