A Taste of the Poetry-A-Day Challenge 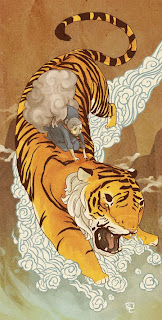 The prompt yesterday was to write a myth poem. Now if I were writing about love, how easy woud that have been? I mean Athena, Aphrodite, et al. So I did a quick search to find deities associated with wind, since my theme is vertigo. I found Feng P0-Po, a minor Chinese deity who rides a tiger and carries the wind in a bag on her back. I immediately became interested in her because I was born in the year of the tiger. So I did a little more research, this time on ancestor worship, because in some ways my vertigo has killed the person I used to be. Lo and behold I found out about the Qingming Festival. The festival is celebrated around April 4 which is my birthday. I then read a piece of a poem by Du Mu called Qingming in which alcohol (wine specifically) is mentioned. Alcohol affects the liver. According to my accupuncturist, vertigo, which is associated with wind, is connected to the liver. So that bit of poetry also aligned itself with my overriding theme. My only regret is that, due to the poem-a-day aspect of this project, I am unable to fully realize this particular day's prompt and I hope to revisit it later. With that said, I did write and post a rough piece and I thought that I would share it with you so you could see what I have been doing with my time.
Untitled Prose Poem

In the time of Qingming, we sweep aside the residue of yesterday as Feng Po-Po whispers an invitation to catch the wind in a bag. Tipping a glass of wine to tomorrow, the drunken steps that follow me, that sweep me footless, place me in this only moment. Now I no longer roar but in my sleep I mewl, a cub learning how not to fall and clawing at my pillow for stability. I point my way, left then right, to see if I can stir my misperceptions, stuff my disappointment in the bag of unmet expectations, pray to silent gods for peace.
Posted by Satia at 6:43 AM No comments:

This cracked me up. Romanov often lies under my desk, making it challenging for me to move my chair close enough to type comfortably. Snowdoll has been trying to take over the "under the desk" area herself. Because she is smaller, even when she stretches out, I can still get close enough to the desk. But when she curls herself up in a corner like this . . . 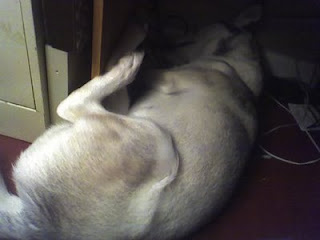 Why it's almost like not having a dog under my desk at all!
Posted by Satia at 6:23 AM No comments: 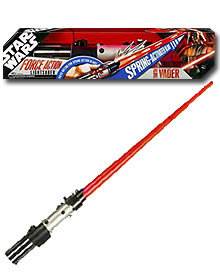 Rob was playing with a new toy he bought for himself and scared the piss out of poor Snowdoll. This is literal. She saw this toy, listened to it make scary laser noises. And, tail between her legs, she rushed to the bedroom and left a trail along the way.
She has been glued to my side ever since. Rob called her and she eventually went to where he was but she stayed only long enough to get a few hugs and tummy rubs before coming back to where I was.
In the meantime, I am at over 20,000 words for nanowrimo. And this is my sixth post for this month. AND I have posted a poem a day for the other challenge. In fact, today I posted three short pieces which, when read together, actually reveal a lot about my writing process.
Posted by Satia at 10:27 PM No comments:

Today I am Happy 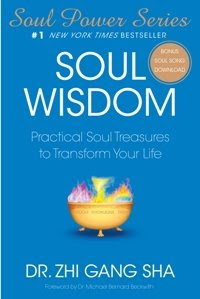 Soul Wisdom: Practical Soul Treasures to Transform Your life by Dr. Zhi Gang Sha took me longer to read than most books because I wanted to do the suggested exercises, to follow the teachings as closely as I could. I need to predicate this review by saying that I believe in energy work, do Qi Gong and Reiki with great success but only as a practitioner. I know it works because I have witnessed and experienced it in my life. I did not experience success with Dr. Sha's exercises. I devoted myself to them and did not experience that intuitive awareness that there was something there. The physical things I associate with energy work were not there. This is not to suggest that what he recommends is useless. If there were only one branch of healing that worked, there would not be so many branches out there. Do Dr. Sha's methods work? He wouldn't have a best-seller if they didn't. But after hours with soul language and song, I had nothing positive or negative to say. It was just nothing. Also, I am unable to review the cd that comes with the book because the one I had did not work in any of the many players we have in our home. Not terribly disappointing. I am content if uninspired. My final thoughts--try this on for size. If you reap benefits and can share them with others, wonderful! If not, there are other methods out there to be experienced and you can find a fit that resonates for you. Listen to your intuition and the rest will follow.
Posted by Satia at 11:21 AM No comments:

The Return of the Prophet by Hajjar Gibran 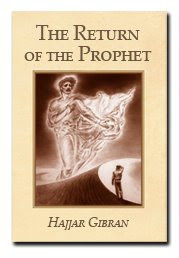 The Return of the Prophet by Hajjar Gibran is an ambitious endeavor to write a sequel to the classic by Kahlil Gibran, The Prophet. There is a certain amount of hubris implied in writing a sequel to another author’s works but the fact that Hajjar is somehow related to Kahlil, although the lineage is never clearly defined, is supposed to add a veneer of acceptability to a clearly daunting task. As I read this book, I wondered if Hajjar aspired to create a text as eloquent and impacting as Kahlil’s. He manages to embrace the voice and tone of the previous publication very well and his story is more contemporary in some ways. However, I recall reading The Prophet and needing to set aside the book to meditate on the passage I had just read. I never once set Hajjar’s book down for that reason. Rather, I would finish a chapter and consider whether I wanted to read another chapter or perhaps do something else. I neither felt compelled to continue reading nor stop reading. In that respect, I suppose the book does not live up to its promise. The truth is, I did not approach this book with an assumption it would live up to Kahlil’s seminal story. Rather, I came to it with the same lowered expectations I would to any other sequel. With that in mind, I enjoyed the book. It did not exceed my expectations nor did it disappoint completely. There are enough writings by Kahlil Gibran to make a sequel to his lovely The Prophet superfluous. Anyone aching to read more of the brilliant teachings of Gibran would probably do better to stay with Kahlil. But, if Kahlil’s writings have been exhausted and there is still a need for more, then Hajjar’s book is here to fill, if not fulfill, that need.
Posted by Satia at 9:46 AM No comments:

Who knew? Apparently Marc did. There is a National Blog Posting Month which, like NaNoWriMo, is meant to encourage people to write. In this case, blog posts. In other words, write a post a day for a month. So far so good. Day two and two posts. I'm also participating in a Poem-a-Day challenge. And of course, nanowrimo. Are you keeping up? Neither am I.
Posted by Satia at 10:17 PM No comments: