And today I hit 50020 so I am officially done. I haven't decided if what I have is too impossibly messy to be pulled together into anything worth reading but I don't need to make that determination at this time. I'm tired. I need to stop writing for a bit. Or at least until tomorrow when another poetry a day challenge prompt is posted and I write another poem.
Posted by Satia at 10:22 PM No comments:

Email ThisBlogThis!Share to TwitterShare to FacebookShare to Pinterest
Labels: nanowrimo 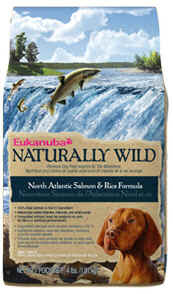 We had changed Romanov to mature food because he is soon to be eight and was ready for the change. Since making this change, Romanov has gained nearly ten pounds! He's getting fat and he's also nibbling little raw patches into himself. In other words, even though we were using Eukanuba still something was very wrong in his diet.
Snowdoll, in the meantime, has suffered from on and off again diarrhea and it took us forever to find a food that is good for her. Finally, she is eating something that agrees with her sensitive tummy and Rob and I have decided that we are switching Romanov to the same food because obviously, whatever his age may be, he is not happy with the mature dog food.
What we are going to feed them (along with the usual treats and extras) is Eukanuba's Naturally Wild North Atlantic Salmon & Rice. This seems the most obvious choice because in the wild their diet would be more likely to include fatty fish like salmon and with Snowdoll's ongoing need for rice to keep things good for her we saw no reason not to make the change.
I'm hoping we'll soon see a more slender Romanov. I'm sorry we ever made the switch and I doubt that when it's Snowdoll's turn to be labeled "mature" we will be so hasty in changing her diet.
Posted by Satia at 9:15 AM No comments:

Going Postal by Terry Pratchett is another Discworld book which goes to show you just how much escapist nonsense I feel I need in my life at this time. And it is so nice to have this safe place (Discworld) to turn to when I am tired of reality.
In this volume we have a conman who gets manipulated into taking on a seemingly impossible task. As with all Discworld books, there are satire. Business and technology are the primary targets in this one. There's a bit of romance sprinkled in too. And there are Golems. DEATH makes one very brief appearance. A bit of a disappointment. More disappointing were the editorial errors (including a sentence where an entire word was lost somewhere along the way--WTF?). Above all else, this book proves there are some things only slightly better than death and one of those things is a government job. I suppose there are those who would argue that the other option is actually an improvement.
My favorite quote:
There was a pregnant pause. It gave birth to a lot of little pauses, each one more deeply embarrassing than its parent. (313)
Posted by Satia at 9:50 AM 1 comment:

The Audacity of Hope by Barack Obama 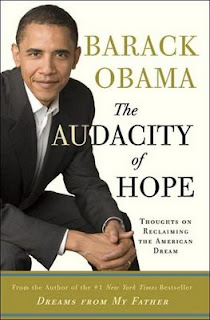 The Audacity of Hope by Barack Obama is a combination of his political experiences alongside his life experiences. And in keeping with my commitment to not wanting this to become a politically focused blog, my response to the book will not have much to do with politics. One of the observations my children and I made before, during, and after the election focused on the media’s focus on Obama’s being “African American.” Given that his mother is white, this seemed dismissive at best although it also seemed to hearken back to the archaic “one drop rule” that defined racial identity not very long ago. After reading Obama’s book I realize that he self-identifies as African American and while I would love it if we could get away from racial labels altogether I certainly respect his right to define himself in whatever way he chooses. Truth is, I don’t agree with every political position he takes, although I understand why he feels the way he does. It was, nevertheless, a delight to read about his behind-the-scenes experiences, including a few references to a certain senator who opposed him a recent election. It made me wonder if the attack ads that are so endemic during campaigns are not actually something the candidates regret having to do. I mean, I’ve often heard politicians protest their use but I have yet to see one not give into the temptation. Like most people I assumed this was just political lip service, a case of “methinks he doth protest too much.” After reading this book, however, I can almost believe it is a sort of political necessary evil although it would be nice to see politicians live up to their protestations and rise to the occasion. Too bad it would be a very expensive stance for any politician to take. The book ends with Obama writing about his family and his family values and here is where I had to slow down my reading because I kept getting tears in my eyes. There is an honesty about him, a self-effacing quality I would never have guessed at, before reading this book. Am I eager to read his Dreams of My Father? You betcha!
Posted by Satia at 7:40 PM No comments:

Romanov was a bit abused by an overly playful Snowdoll and ended up with a cut on his ear. Then there's this patch of fur he kept nibbling and licking until it started to turn into a bald spot. Uh oh. Time to bring out The Cone. He'd never had one before and he was none too happy about having one now. Never mind that Snowdoll had worn one only a couple of months ago. He became miserable in an instant, trying to take it off. 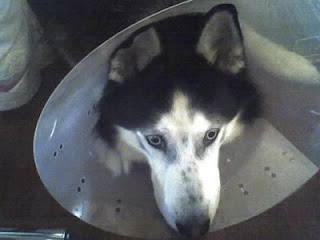 More pathetic than this, however, is that he is clumsy beyond reason now. Last night as he tried to circle his sleeping place into submission, his cone kept striking the side of the bed. For any other animal this would mean stepping back or lifting his head to be able to move again. Not for Romanov. He just stood there, looking pathetic, waiting for someone to fix it for him. I did but he just couldn't get over what had happened and walked over to the other side of the room. So far he's accumulated quite a list of ways to get stuck: • As he tries to curl up under my desk, he gets the cone stuck on the corner of my keyboard tray. • Once rescued from the tray, he then gets stuck on one of my legs, effectively wedging it between my chair, his cone, and the underside of the desktop. • He has locked himself behind my legs while I am cooking which means I have to move if he ever hopes to make any progress. • We already know what happens when he tries to circle before lying down beside the bed. • He knocked Rob slightly off balance coming up behind him wanting to be pet. • He cannot get under the coffee table without someone helping him. • He still insists that before actually crawling under the coffee table he must first maneuver underneath the legs of anyone sitting on the couch which, because of the cone, means you really have to lift your legs high. I am beginning to think that he is not the only one who will be happy when we can finally take this thing off his neck.
Posted by Satia at 9:16 AM No comments:

Email ThisBlogThis!Share to TwitterShare to FacebookShare to Pinterest
Labels: Romanov

Apparently instead of posting this I actually just saved it as a draft. Oops. Anyway, here it is in its somewhat belated glory. This is a of my son having fun at a show which apparently is officially up at the website. It's a cool shot. I don't blame them for putting it up and it's very exciting Marc is right there! 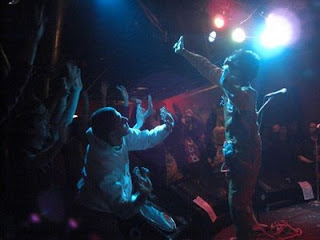 And as I've mentioned before, I've been taking part in this poetry a day challenge which is a bit crazy making because there's no time to revise and the prompts aren't always something that immediately click. The person doing the challenge has said we don't have to use the prompt if we find it uninspiring but forcing myself to not only write the poem but to do so in compliance with the prompt has been a stretch and I've enjoyed that extra layer of it all. Here's yesterday's response to the prompt which was to write a love poem in keeping with the theme. This is a love poem but what it has to do with vertigo I still haven't worked out.