RAWS: Read Along With Satia

I am going to visit my mother for a very short visit but even a short visit means time spent at the airport and on the plane so I need to have something to read on the flight. So most of what I’ve chosen is the type of material that will fill the time without my running out of reading because in the past I’ve finished the book one way and had to buy another book to bring me home. Not this time, dammit! The following are in no particular order.

The Tale of Genji by Murasaki Shikibu is the first novel ever written and I love that it was written by a woman. This is an epic tale of the emperor’s son, a classic in Japanese literature. I have this in one massive paperback but I can also borrow Marc’s two volume hard cover and take just the first book. I keep saying I’m going to read this book and then don’t so this would be the chance to take it with me and get it at least started and hopefully started enough to actually come home with the desire to finish it completely. But I have recently read a collection of haibun and am further inspired to read this classic because of its blend of prose and poetry. Definitely a book I want to read and maybe if I don't this year then I shall make it a priority for next year.

One Hundred Years of Solitude by Gabriel Garcia Marquez is another in the long list of “I want to read this before I die” books. I’ve read some of Marquez’ other works but this one is the one I’ve wanted to read most so why haven’t I read it already? I don’t know. Here is what they say on amazon.com: “One Hundred Years of Solitude tells the story of the rise and fall, birth and death of the mythical town of Macondo through the history of the Buendía family. Inventive, amusing, magnetic, sad, and alive with unforgettable men and women -- brimming with truth, compassion, and a lyrical magic that strikes the soul -- this novel is a masterpiece in the art of fiction.” Given its epic scope, it is very likely a good choice to carry me through the entire trip, there and back again.

Red Azalea by Anchee Min I picked up after hearing her discuss her experiences in China during the more militant times under Chairman Mao. This is her memoir of that time in her life during the 1960s and 1970s in Shanghai, her youth in the Red Guard, and her love affairs both personal and political. I definitely want to read this book soon because I had forgotten I even owned it and I am once again excited about learning more about Min’s experiences. I remember reading a novel she'd written which was based on one of her life's experiences which is detailed in this memoir--Katherine. I also know that her book on Madame Mao received excellent reviews when it was released. This would actually have been an interesting book for the book group to which I formerly belonged but I don't belong to it anymore so I can't recommend it as a future choice. Oh well.

The Temple Bombing by Melissa Fay Greene is a non-fiction book about the bombing of Atlanta’s oldest synagogue and its implications during the early days of the Civil Rights movement. I saw Greene lecture once and was fascinated by her passion for bringing history to life and also make it relevant to contemporary readers. I recently read a book about holocaust denial and this seems to dovetail from that one rather nicely. I mean, if one can use the word "nicely" within the context of racism and violence. There is a sort of thematic quality to reading this book at this time but is it the sort of light reading one takes on a trip? Probably not. still, I am not one to do the typical.
Posted by Satia at 10:08 AM No comments:

Email ThisBlogThis!Share to TwitterShare to FacebookShare to Pinterest
Labels: RAWS

This is based on the poetry a day challenge which explains NOVEMBER being the biggest word.

And here's my nanowrimo novel in all its wordle silliness. Guess what the names of the protagonists are. 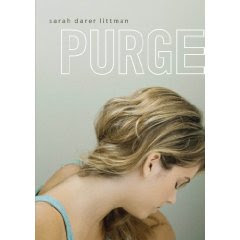 Purge by Sarah Darer Littman is one of those ubiquitous young adult novels meant to teach young readers a valuable lesson. While not crossing too far into pedantic preaching or self-righteous judgment, the novel is not so remarkable as to merit much praise. Littman would benefit from an editor who can recognize that young adults are intelligent enough to remember what they read in a previous chapter. The redundancy bordered on insulting. And I don’t mean the vague allusions to the melodramatic moments that led to the protagonist’s admission to the hospital for bulimia. Rather, the repetitious explanations of barfers vs. starvers and the epiphanies the narrator has but then has again. Thankfully, Janie Hyman, the narrator who shares her urge to purge, is a likeable character and much of the psychological dynamic behind bulimia is well explored through the voice of a sympathetic character. However, for the all “this is a cautionary tale about how bad bad bad bulimia is” I found it to be dangerously triggering and I have never been bulimic. If I found myself curious instead of disgusted then I can only imagine how a young girl with body image issues and an eating disorder would struggle with the content. And the conclusion is one of those tie-it-up-in-a-neat-little-bow endings that I suppose are meant to make the story end on a happy note but ultimately result in its ending on a disingenuous one. Also annoying and less remarkable albeit I am remarking on it now . . . why didn’t anyone point out to Littman that the term for practicing before a performance is called a “rehearsal”? Repeatedly Janie talks about her “play practice” when anyone who has done any theater work would know a “practice” is called a rehearsal. With all that said, I suppose someone wanting insight into bulimia and the emotional ramifications of facing this addiction would benefit from reading this novel, if only because of the excellent resources listed at the end of the book.
Posted by Satia at 5:49 AM 2 comments:

And Again, So Much to Say

Friday was not only a special day but it was also a sad day. It is the anniversay of my having vertigo. Two years. Hrm . . . The following was recorded the day before Rob's 27th birthday. We would meet less than two years later and both of our worlds would change, much as they did two years ago.
Posted by Satia at 9:25 PM No comments: