Man’s Search for Meaning by Viktor Frankl is one of those classics I’ve been meaning to read for a while. I started it ages ago but remembered little to nothing of what I had read. Frankl, a Holocaust survivor, spent three years in Auschwitz and shares his experience to contextualize his psychological theories. When writing about his experiences before, during, and after WWII, Frankl maintains a detachment that makes the horrors he describes no less horrifying than a more passionate expression would be. As he describes how his love for his wife was the focus of his hope for survival, he tells the reader that his wife had already been murdered in the gas chambers. The first two thirds tell his harrowing story and the final sections describe his psychological theory of logotherapy. Quoting Nietzche (He who has a why to live for can bear almost any how) and the Bible (Ps 56:8, et al), Frankl explains that humanity needs a reason for being. Without a purpose, each person is lost. Through his experience in the concentration camp, he came to see first hand the despair that would result in death. The loss of hope, above all other losses, was the one thing that assured doom. A man (or woman or child) who had lost a home, all possessions, and family would stand if there was a reason to hope.
This is not a book to be read lightly. Rather, it is one that provokes some thinking and awareness. I think that on some level I was looking for something else between the pages. Nevertheless, I was not disappointed by what I discovered. Like searching for one treasure and finding another, the lessons are still valuable and informative.

"It did not really matter what we expected from life, but rather what life expected from us. We needed to stop asking about the meaning of life, and instead to think of ourselves as those who were being questioned by life—daily and hourly. Our answer must consist, not in talk and meditation, but in right action and in right conduct. Life ultimately means taking the responsibility to find the right answer to its problems and to fulfill the tasks which it constantly sets for each individual."

When Janet Jackson cancelled some of her tours, her brother Randy announced she had vertigo. Almost immediately the media skeptically suggested that the real reason behind the cancellations was poor ticket sales. When Meatloaf showed up at a presentation a little less than steady on his feet his agent explained that the singer has vertigo and the newspapers said he didn’t have vertigo but was wasted. It is hard enough for people with invisible conditions to be taken seriously or understood. When articles such as this one tell people to use vertigo as an excuse to leave work so they can finish their holiday shopping, it makes it that much harder for people like me who struggle their way through even the simplest of activities to be respected. But hey! The article isn’t serious, right? So what the hell. Tell your boss you have cancer. Cancer is always good for a laugh. Or maybe you can say you have Multiple Sclerosis. It’s fun to say and the bonus is you get to complain about vertigo and people just might take you seriously. Unless of course you happen to be a performer. Then others are just going to say you are avoiding low sales or justifying your most recent addiction. I think my problem is that when I got lost in the vertigo I lost my sense of humor too. Oh well. Sucks to be me all over.
This is what I woke up to on my last day in NJ . . . a pretty dusting of snow. The perfect amount to make things pretty but not so much that my flights were delayed. 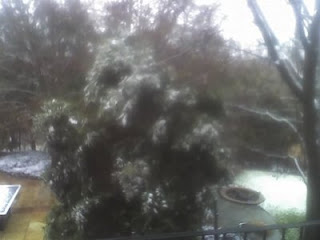