Hands of My Father by Myron Uhlberg 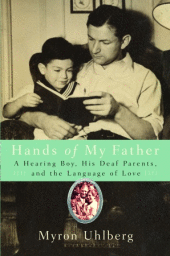 Hands of My Father: A Hearing Boy, His Deaf Parents, and the Language of Love by Myron Uhlberg is one of those rare memoirs that it is nigh near impossible to find nowadays. A gentle, compassionate telling of what it was like for Uhlberg to grow up in Brooklyn during the latter years of the Depression and into the early fifties. In a day when it seems de rigueur to boldly seek out every emotional scar and rip it wide open to pour blood out onto the page, sharing the dirtiest and messiest parts of our very beings, Uhlberg writes about his relationship with his father honestly. He does not hide the shame he feels as the outside hearing world sneers or behaves rudely towards his parents. Measured against this isolated experience of other people’s ignorance, he describes the typical boyhood of growing up in Brooklyn, playing in the streets and finding ways of being a child while still being called upon to be the voice and ears of parents who could not communicate except through writing otherwise. This tentative line of innocence and responsibility is told with almost poetic loveliness. When Uhlberg describes the various signs, the reader, even without any familiarity with American Sign Language, can visualize precisely what he was seeing. The book manages to inspire pathos without being pathetic, drawing a smile, an occasional sigh, and, yes, even a sniffled tear. The only other thing I can say about this memoir is that, if I were to write a memoir, I would love to be able to write one as overflowing with truth and love as this one is.
Posted by Satia at 11:07 AM