The Spring of My Life by Kobayashi Issa 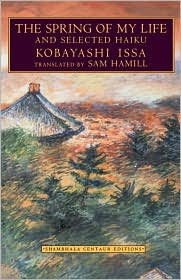 Spring of My Life and Selected Haiku by Kobayashi Issa (trans. by Sam Hamill) is a lovely collection of haibun and haiku by the poet traditionally known as Issa. The elegance of his prose, his ability to communicate Buddhist tenets is elegant, and I didn’t want the reading to end. But his writing is not only about the elevated. Rather, he draws profundity from things as mundane as frogs to something as heartbreaking as the death of an infant daughter. For those who are trying to practice living in the now, who may have heard of Bassho’s The Way of the Haiku but not seen how it is practiced/applied, this book is a lovely example of these things. As Kobayashi describes first in prose a moment from his experience and then condenses it into the traditional seventeen syllables of a haiku, the reader is witness to the delicacy, the impermanence, of each moment. Here is the fourteenth haibun in the collection, only the first paragraph and the haiku beautifully translated by Sam Hamill.

It is often said that the greatest pleasures result in the greatest misery. But why is it that my little child, who’s had no chance to savor even half the world’s pleasures—who should be green as new needles on the eternal pine—why should she be found on her deathbed, puffy with blisters raised by the despicable god of smallpox? How can I, her father, stand by and watch her fade away each day like a perfect flower suddenly ravaged by rain and mud?