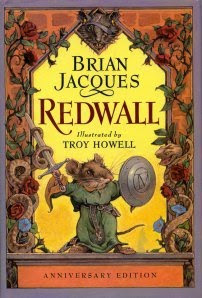 Redwall by Brian Jacques has been out for a while and there are many sequels. This fantasy novel is filled with anthropomorphic animals and the usual quest and hero themes one would expect. By the end of part one I thought to myself that I wasn’t exactly thrilled with what I was reading and probably should stop but for some reason I didn’t. Instead, I struggled through to the end, probably hoping it would get better. And the thing is, it didn’t get better but really it isn’t that bad. It’s just cute. Cute and not very clever. Too often the characters happen upon the answer because they lean on a wall or move a piece of furniture or just happen to be in the right place at the right time. Jacques also has an annoying habit of off-setting a single sentence and then ending it with an exclamation mark as if having a single sentence paragraph were not emphasis enough! This affectation is not effective and I hope that he dropped it in the sequels and prequel(s?) that have since been published. I will give credit to Jacques for creating a lovely little world full of mice and bunnies and squirrels and sparrows. It reminded me a bit of the dollhouses they used to sell at FAO Schwartz that had little mice, dressed in human clothing, in place of the typical human dolls that would live in a dollhouse. I always found the dollhouses enchanting and I think I hoped to regain that sense of child-like wonder while reading these books. I didn’t. Instead, I was pretty bored throughout. Most confusing to me is that I’ve heard this book compared favorably with Watership Down and, frankly, Jacques’ novel doesn’t even come close to Adams’ brilliance. Cute book but ultimately a let down. I won’t read any of the other books in the series. After all, I still have to work my way through the Wheel of Time books and the Earthsea trilogy and the Sword of Truth series and . . . well, you get the point.
Posted by Satia at 8:38 AM