I don't know how well this pic came out but I am going to try to take more and maybe soon I'll have a better one to share. All Siberian Huskies are born with black noses (except for the white and red/brown ones which have brown noses). With each winter, the husky's nose will get a little pinkness in it. This pinkness fades in spring and summer only to return and get larger. Eventually the husky nose will never return to full black, as is the case with Romanov who has a perpetual pinkness to his nose now. Snowdoll is beginning to get her first blush of pinkness. 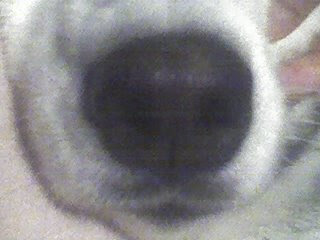 Can you see it? Even a little maybe? No? I swear I'll take more pictures.
Posted by Satia at 1:14 PM 2 comments: 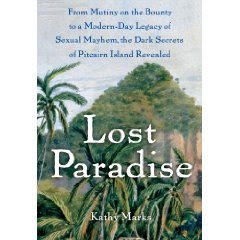 Lost Paradise: From Mutiny on the Bounty to a Modern-Day Legacy of Sexual Mayhem, the Dark Secrets of Pitcairn Island Revealed by Kathy Marks is fascinating, above all else. Marks, one of only six journalists allowed onto Pitcairn during the course of the trials, manages to tow a fine line between giving information without sinking into salacious details, for which I must commend her. It would have been easy to sensationalize a story which, because of its history and content, lends itself to being a sensation. Just around the new millennia, a young girl, who was born and raised on Pitcairn, tells an outsider that she has been sexually violated. This one confession spirals in a seeming endless web of victim and perpetrator and more and more women step forward, recalling episodes of molestation and rape from up to thirty years prior. The men, of course, deny everything and even the mothers come to the defense of the men, suggesting that this is a cultural norm and that British laws do not apply under the circumstances. The fascinating issue underlying the situation is that the community is small, around fifty people altogether, and the interconnectedness within the community results in a nearly total breakdown of family ties. The investigation cut off any incidents that occurred prior to 1960. Nevertheless three generations of men were accused so it was not unlikely for one woman, victim or not, to find her father/spouse/sibling/son accused of rape. (One woman actually had all three generations accused from father to husband to more than one son!) To try to comprehend what happened and why is impossible. How the cycle of abuse perpetuated can be easily guessed and Marks does a wonderful job of implying without drawing any adamant conclusions. Because Pitcairn’s population is mostly made up of the descendants of the mutineers of the Bounty, there is a certain romance that diffuses the whole island culture. Frankly, most of that “romance” is Hollywood glamour. The true history behind the settlement is not nearly as pretty as the movies make it but when have old classic movies ever not idealized history to some degree? The conclusion to this explosive story has yet to be written as the events are far too recent to be fully analyzed. The conviction and punishment of the men responsible for the abuse is unsatisfying, too lenient by any definition of the word. But the most surprising moment for me came in the final chapter where one of the victims, having returned to the island to live, describes how she is ostracized and even hated by the other citizens of the island. She is quoted by Marks as saying, “There are locations here which, when I drive past, there’s still a sense of foreboding about them. But I don’t feel any resentment or hate towards any of those men. The hate that people here are trying to dump on me, I feel sorry for them. Once you let it go, it’s so much easier.” (287) As remarkable as the rest of this story may be, for me the words of this survivor ring louder and more beautifully than anything else.
Posted by Satia at 10:07 AM No comments:

I’m Perfect, You’re Doomed: Tales from a Jehovah's Witness Upbringing by Kyria Abrahams sets a tone of voice, a quirky perspective, and sardonic humor from the very first chapter which reads with the sharp snappiness of a stand up comedy routine. Thankfully, after the first chapter, the book settles into a more narrative flow, remaining true to the voice, with only the occasional biting comment and brilliantly surprising metaphors. Abrahams shares her story about growing up a Jehovah’s Witness in Rhode Island in a family that clearly needed more than the neighborhood Kingdom Hall could provide. Her parents are miserably married but unable to leave the marriage without risking being excommunicated, or, as the JW’s put it, disfellowshipped. As Abrahams approaches pre-adolescence, where everyone has the angst ridden conviction that they are alone and the sole freak in a world of normalcy, she is forced to renounce holidays and Smurfs all for her religion’s sake. As she gets older, her sense of isolation and desperate need for community grows. Her friendships have a furious neediness and her own dysfunctions manifest in other self-destructive ways. That she eventually breaks away from a faith she never fully embraced is inevitable. How she does so is perversely fascinating as Abrahams holds nothing back, exposing her train wreck choices with enough humor to lighten up what could have potentially been an utterly depressing and despairing story. Although the last few chapters seem to rush through to a not quite satisfying closure, over all the memoir is satisfying enough to make me wonder what happened next. Does Abrahams ever return to the Jehovah’s Witnesses or does she choose to follow a different spiritual path? According to the single sentence blurb on the back of the book she is a standup comedian (not a surprise), spoken-word poet (and unfortunately never shares any of her good poetry but oddly chooses to share a typical teenaged attempt at verse), and web producer (I don’t even know what this means because I’m pretty sure that the web was around long before she first used a computer so how can she possibly have produced it?). I should offer one caveat in my review. I read the acknowledgments when I was more than halfway through the book and was pleasantly surprised to see the name of someone I know. So by some small world coincidence, Abrahams and I are only one degree removed from one another. And thanks to my daughter this means that Abrahams is only four degrees removed from Kevin Bacon. Or maybe that’s five . . . I always forget the exact numbering of these things.
Posted by Satia at 6:40 AM 2 comments: