The Tales of Beedle the Bard by J K Rowling 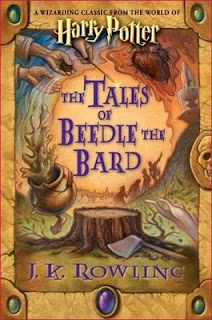 The Tales of Beedle the Bard by J K Rowling is a cute addition to the Harry Potter library but probably best appreciated by those who are die hard Potter fans. With clever commentary by Professor Dumbledore, the book is still rather slender. A quick read. Each tale offers a moral which Rowling, as Dumbledore, feels compelled to explain to the reader. I think I’m grateful that the brothers Grimm and Andersen did not feel the same compulsions but I found the concept amusing. It puts me in mind of J R R Tolkien’s The Tolkien Reader (an out of print book I’ve held onto with a vengeance) which adds flavor to the whole Middle Earth milieu without actually adding any content. Not a bad thing, per se, but not necessary. The problem I have is that I wonder if Rowling isn’t milking the (cash) cow for all it’s worth. It is common knowledge that Tolkien had already accumulated volumes of notes, stories, ideas, and details for his creation before his brilliant Lord of the Rings was published. And perhaps this is true also of Rowling. I remain unconvinced however. What redeems this book from being an excuse to make more money is that the profits from the sales go to her charity, Children’s High Level Group. Frankly, I respect that. She could write sweet little nothings for the rest of her career and donate all of the money to her charities for the rest of my life, live off the Harry Potter residuals, and I would think it’s great. Why not? She doesn’t have to push herself to write something brilliant. She’s done her part for the young adult literary community. I guess it helps that I don’t expect her to write anything brilliant or profound. Just fun. Which is what this book is: fun. Nothing more. Nothing less. And sometimes that’s enough.
Posted by Satia at 8:58 AM No comments:

The Thoreau You Don’t Know by Robert Sullivan 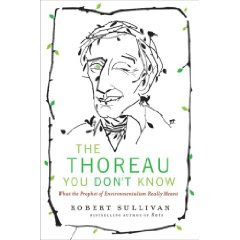 The Thoreau You Don’t Know: What the Prophet of Environmentalism Really Meant by Robert Sullivan is a delightful surprise. Both reverential and iconoclastic, Sullivan manages to do what Thoreau did himself—create a personality that defies easy explanation but never fails to intrigue. The book includes a liberal helping of contextual references, placing Thoreau firmly in the era in which he lived. The political and social environment is as richly detailed as is the natural environment and, while Walden inevitably overshadows much of the text, it is only one of many details that enrich this delightful book. What is most remarkable about this book is how Sullivan manages to make a potentially academically dry subject and make it completely accessible. Even a reader who is not very familiar with Thoreau’s writing or has only read one or two of his more famous (infamous?) writings will find something interesting within the pages. Sullivan’s tone is familiar, rather like an elderly uncle telling you stories about a long lost relative, harkening back to someone very real and relevant. Complete with the redundancies and personal asides that a family member would include, Sullivan shares Thoreau in a way that makes him both personal and personable. He strips away the façade and exposes the icon in such a way that makes him all the more inspiring and interesting. I read this book slowly, sipping at it as I would a wonderful cup of tea. I hope that people who revere Thoreau will read this and allow him to once again be humanized. More than that, I hope that those who are unfamiliar with Thoreau will take the time to get to know him through Sullivan’s eyes and understanding. I am curious to read Sullivan’s other book, Rats, to see if the tone and voice of this book is similar. If not, then what Sullivan accomplishes in this book is sheer genius. If it is the same then I won’t complain; I’d love to sit down and listen to him share more of his stories, no matter how redundant or repetitive he may be at times.
Posted by Satia at 8:17 AM No comments: