The Truth About Truman School by Dori Hillestad Butler

The Truth About Truman School by Dori Hillestad Butler is a young adult novel about cyberbullying. When Zebby and her best friend Amr create a website to encourage other students at Truman Middle School to share their own stories the website quickly degenerates into a forum for gossip and eventually abuse. Things spiral beyond their control in the name of freedom of speech and the two are simply too young to know where or when to draw the line. Butler manages to communicate a story without becoming preachy or pedantic. She also tells a story that feels all to real. A sort of 21st century Lord of the Flies, the reader is easily drawn into the complicated relationship dynamics that one would assume can easily be found in middle schools across the country if not around the world. However, I’ve experienced cyberbullying, having been on the receiving end of horrible abusive. Someone even went so far as to suggest that I had made up my mother’s breast cancer. And the person was presumably an adult, a former model cum lawyer who was happily married, etc. So reading this novel, I went into it with a certain degree of skepticism. Could the author adequately convey the confusion and hurt of being bullied online, never being afforded the opportunity to face your attacker? Would the author make the victim of the bullying so sympathetic that he/she would become too saintly to be real? Fortunately, Butler manages to keep most of the characters from becoming such a cliché as to make the novel predictable. Well, at least not too terribly predictable. The big “gotcha” at the end wasn’t that big a surprise to me but I would think most readers would be in the dark for most of the novel. There is a website associated with the novel with a message board to discuss cyberbullying, resources for teachers, and links to other websites about the subject.
Posted by Satia at 8:51 AM 1 comment:

In 1998 I was suffering from a heartbreak that I thought would never happen. When an acquaintance called saying that he was moving and couldn’t take his cat with him to his new home, I immediately perked up and said yes, I would take the cat. It was symbolic, in some ways, because the person who had broken my heart had severe allergies and could never live in a household with a cat. In some ways, my bringing this cat into our home was my way of permanently locking the door he had merely closed behind him. 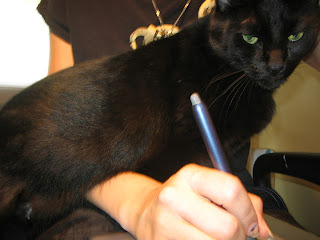 Raven arrived on Christmas day and was supposed to be the family cat, albeit mostly my family cat, if you know what I mean. However, he’d been raised by a group of men and he did not immediately take to either me or my daughter. Instead, he hovered around Joe and Marc, even going to sleep in their room. Marc is not a cat person by nature and was simply too loud, too energetic, and all around too boisterous for poor Raven. In the meantime, Rei had been talking to Raven in his own language, responding to his meows with an echoing cry of her own. So attuned to Raven’s call was she that sometimes I thought he was the one making all the racket when it was actually the two of them singing together. Over time, Raven’s loyalties shifted and he became my daughter’s cat. 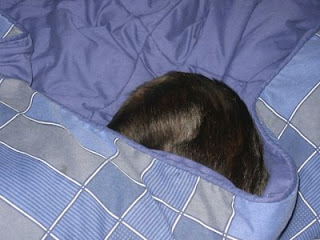 I did have the comfort of his presence when she left for college briefly. He would spend most of his time in my bedroom and I had the pleasure of his snuggling up beside me at night. He was definitely a cuddler! If I shifted in my sleep, creating even a couple of inches of space between us, he would shift to be closer until once again he was up against my back or hip. And he snored. Loudly. I know that most people snore more loudly than Raven did but honestly he could give some people a run for their money. I grew up with cats and although I may be biased, I always thought that Raven had a remarkably pretty face for a short haired cat. He was very expressive with his features but most remarkable was his almost canine like loyalty to my daughter. He would follow her around the house, trying to gain her attention, and lie wherever he could easily see her when he wasn’t immediately lying beside or even on top of her. He was a wonderful kitty and a wonderful friend to my daughter. He was deeply loved. He is already sorely missed. 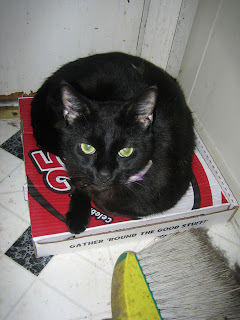 Vivienne: The Life and Suicide of an Adolescent Girl by John E Mack and Holly Hickler is the true story of Vivienne Loomis who hung herself at the age of fourteen in 1973. The book is out-of-print but I was able to find a copy at the library. (This is also why I am unable to provide a book cover for this review. Sorry!) The book is divided into three parts. The first part is a collection of writing from Vivienne Loomis’ diary, samples of her poetry, and letters to and from a teacher. The second part is a clinical assessment of the source material, adding more information about the family within the context of contemporary research in adolescent depression and suicide. The third part is an essay by a teacher who also taught at Vivienne’s school who did not actually teach Vivienne although she did encourage her to submit a poem to the school’s literary magazine. Each section offers a different perspective on Vivienne’s family, life, and her eventual suicide. By beginning the book with Vivienne’s own writing, the authors give the reader a perceived intimacy with the girl. When the book shifts into the more clinical discussion of what propelled Vivienne to kill herself the reader wants to get some understanding that cannot be found in the first section. The book does not offer any easy answers and by the time we are reading the thoughts of Holly Hickler, a teacher at the last school where Vivienne was a student, it is hard to not want someone to offer a solution, a reason, something to explain and hopefully stop adolescent suicide. Where this book fails is beyond its control—time passes and new research comes along. Some of the content sounds dated simply because things have changed. There are some things subtly implied or suggested that would now cause a therapist to jump up in alarm. Ultimately, the book is not as insightful as it might have been only because there is more awareness about family dysfunction. Therapy has come a long way, thanks to research and resources like this book. It is unlikely that there will ever be a single answer that will salvage every depressed adolescent. However, reading this book left me feeling at least some sense of hope that we are probably finding more answers than were possible in Vivienne Loomis’ time. On a purely subjective note, I found it amusing that they had a female pet called Tigger given that I started a short story about a boy whose mother brings home a female cat and names it Tigger. How prescient derivative of me.
Posted by Satia at 7:46 PM No comments: