Why I am Growing to Hate My Birthday

On April Fool’s Day when I logged into facebook I read that a friend’s husband had died. I hoped it was a joke in very poor taste but it turned out to be life leaving the bad taste in my mouth. The funeral was on my birthday. I sent Rob with the following:

Rob actually made the meatloaf. I included a card, expressing our sadness and inviting my friend to call me when/if she needed to talk. In spite of the sadness, which frankly infused every minute of the first week of April, I had a lovely birthday. Pizza, presents, and my favorite people (and puppies) all in one place. Then a couple of weeks later my daughter had to make the heartbreaking decision to put her cat to sleep. Raven had been a part of our family for ten years and he was especially bonded with my daughter which is why, when she moved out, Raven went with her instead of staying with me. It was a very sad experience for everyone and I am grateful I was here to comfort her and spend time with her when she was hurting. We also lost the internet due to yet another vicious storm. (The weather in our area has been especially manic through most of March and April which wreaks havoc with the vertigo.) And just yesterday, my email was hit with a virus. All in all it’s been a difficult month and I’m grateful that this year is flying by because it is proving to be no better than last year. Books Read Emperor: The Gates of Rome by Conn Iggulden The Thoreau You Don’t Know by Robert Sullivan The Tales of Beedle the Bard by J K Rowling Zen Seeing, Zen Drawing by Frederick Franck Sunnyside by Glen David Gold Poetry Therapy by Nicholas Mazza Vivienne by John E Mack and Holly Hickler The Truth About Truman School by Dori Hillestad Butler Either You’re In or You’re In the Way by Logan and Noah Miller Movies Watched for the First Time The Newton Boys -- Based on a true story. Could’ve been better. Sphere -- More suspense than grotesque. Not a bad thing. Waste of a lot of good actors. Sunnyside -- Not one of Chaplin’s best. Rather haphazardly thrown together. The Holiday -- A cute chick flick. Nothing more. Nothing less. The Adventures of Don Juan -- Typical Flynn swashbuckler with pretty costumes and no relevance. Irma La Douce -- Perfection in typecasting, more cute than cutting edge. *shrug* Good Will Hunting -- As much as I enjoy Affleck and Damon as actors, I wish they would write more screenplays. Zodiac -- Too long but Robert Downey Jr is brilliant, as always. In the end, no movie stood out to me and I probably wouldn't watch any of the above again unless I had nothing else to do. And I almost always have something else to do. Television Programming 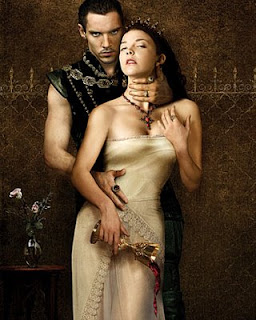 Rob discovered that, for the same price we are paying for our internet connection we could have cable television. What’s more, we get six free months of Showtime. As a result, and using the “on demand” feature, I was able to watch the entire second season of The Tudors. I had watched the first season streaming online and was disappointed that they completely chose to gloss over the very loving relationship between King Henry VIII and his first wife, Katherine of Aragon. This seems to be par for the course, as if the only drama occurs with the entrance of Anne Boleyn. Nevertheless, I was completely sucked into the drama. The acting is superlative. The scenery and costuming are luscious. Forget the historical liberties they take and it is the most satisfying television programming I have seen in ages. Jonathan Rhys Myers is a brilliant bit of casting in spite of his not being physically similar to the historical king. Myers has the presence that one would guess that Henry had in real life and that outweighs the smoldering eyes and dark hair. I hope that the program progresses through the reigns of Edward IV, Mary, and, of course, Elizabeth I. I wish they had gone back to the Wars of the Roses to explore how the Tudors originally came into power but I suppose that was more political than melodramatic and bedroom machinations makes for more interesting television than boardroom manipulations. The show is currently airing the third season which covers the marriages of both Jane Seymour and Anne of Cleves. I know we won’t keep Showtime when it comes time to pay for the programming so it’ll be a while before I get to see Catherine Howard’s decadence and Henry’s final marriage to yet another Catherine but that’s okay. I’ve added the series to my amazon wish list and maybe someday I’ll have them all on dvd.
Posted by Satia at 8:44 AM No comments:

Either You're In or You're In the Way by Logan and Noah Miller is one of those odd but true Hollywood Cinderella stories. The Miller brothers, identical twins, make a promise to their father that seems impossible but all the more so because, after their father dies in jail, they step up their commitment and decide to fulfill their promise in one year's time. The promise? Make a movie from their as yet non-contracted screenplay. But they up the ante by wanting to fulfill their father's vision that Ed Harris should play the role that is based on himself. So without any money, no backers, and no experience, the two brothers set out to make a movie from their own script. The very audacity of what they want to do almost precludes their success and yet, from the first page, the reader knows that they will succeed. That they two manage to write an engaging story in spite of the obvious happy ending foreshadowed is commendable. Unfortunately, the book reads a lot like everything that is cliché about Hollywood, those superficial perceptions that I had hoped would be disproved and yet seem to be proven, even reinforced, with every turn of the page. Short quick clips of narrative that cut from cute to charming to redundant, this is a book that is easy to finish and even easier to put aside. For someone with a short attention span, the form is ideal. For a reader seeking more depth, there will be a letdown. Also, for some reason, the brothers choose to use the plural first person (we) with the oddly disconnected shift to third person (Logan/Noah) which is a peculiar and distracting stylistic choice. I did not see the movie and am still oblivious, although I recognized many of the names that were too often dropped. Most of the book focuses on the off camera reality of movie making--the ego stroking, the money seeking manipulation, the tedious mechanics. Very little of the book is given over to the celebrity of behind the camera moments or even the rehearsal dynamics. I am not complaining. This is how it is to make a movie. Hour for hour, the most time is spent far removed from the camera when a movie is being made. But ultimately the superficial façade, of which Hollywood is often accused, if not wholly guilty of presenting, is perfectly reflected in the lack of emotional impact this memoir provides. It is possible most of it was already spent in the script and then drained of its last life's blood on the screen. It's a pity; the memoir would have greatly benefited from giving the reader a reason to deeply care about seeing this movie made. This emotional connection between the writers and this reader was never achieved and sorely missed.
Posted by Satia at 8:30 AM No comments: