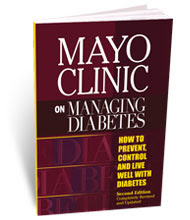 Mayo-Clinic on Managing Diabetes: How to Prevent, Control, and Live Well With Diabetes edited by Maria Collazo-Clavell is a thorough look at diabetes that addresses both types of diabetes as well as the various treatments and concerns. As with most books like these, it can be overly alarming. Reading about how a diabetic is more likely to have kidney problems, end up going blind, or even have limbs amputated is bound to induce anxiety. And I find most of the warnings about watching your weight a bit annoying because it is mostly addressed to the overweight diabetic and not to the underweight (or, as in Rob’s case, the severely underweight) diabetic. I don’t know if this sort of alarmist attitude is typical but it is a bit annoying. I would rather feel empowered by a resource than scared shitless. I suppose there are some people who need to be scared, who need to be bitch-slapped into reality. Rob and I are not in denial about his condition and we both seem to be enjoying the challenge of approaching the necessary lifestyle changes. I think it is a control thing. We both like having control and knowing how we can manage his diabetes and life well is something that we are both bound and determined to do. The best thing about this book is that I was able to find it at the library on audio so Rob could listen to it as I read it. Then we could both discuss the information as we went along. There are some gaps in information (such as suggesting that the diabetic use lotion on the feet but not clarifying that it should be water-based) and even with this book on hand a person diagnosed with diabetes will need the one-on-one attention of a good medical staff. And this book will tell you some of the professionals you will need to see, list the necessary exams (and frequency), etc. I suspect Rob and I will be borrowing this book again a year or so from now to make sure we didn’t forget some important information.
Posted by Satia at 6:48 AM No comments:

Girlforce: A Girl’s Guide to the Body and Soul by Nikki Goldstein is an introduction to ayurvedic teachings, designed for and to appeal to young girls. The pages are colorful, with a lot of photographs of girls smiling, laughing, and enjoying life. It is full of powerful and positive advice, from keeping a journal to exercising. Everything from dietary suggestions to yoga poses to make-up choices are addressed. I’m not quite sure how old the reader is supposed to be. Judging by the images, I would have guessed high school age but at the end of the book a sort of question and answer section suggests that the target audience is middle school or very earl adolescence. This sort of ambiguity was confusing to me, as is Goldstein’s choice not to use precise ayurvedic terms. To say that the girls reading this book are a certain body type is fine but it would be more beneficial to have at least introduced the dosha terms (vata, pitta, kapha) so that the reader could, when she gets older, continue growing in the ideas and teachings of ayurveda. While she goes to the trouble of explaining that yoga means “union” and that the different yoga postures are called “asanas,” I couldn’t find any reference to doshas anywhere. However, there is a website that is clearly designed to further market the book. I think it would be a wonderful idea for the author to explain the different types that she describes (air, fire, earth) in relationship to the traditional doshas. Over all, this is a good resource and likely to appeal to its target audience. I especially appreciated the self-massage and dietary suggestions. Goldstein repeatedly encourages the reader to be balanced in all things. When the dietary choices are mentioned, she never tells the reader to exclude anything but to consider consuming certain foods in moderation. There are a few sections that offer resources to help those young girls whose personal lives may be atypical. This is a fun resource that allows young girls new to ayurveda to learn without feeling threatened or encouraged to do anything foolish. I would have liked to see some images of girls who were not all super slender yet I commend the publishers for at least including a rainbow of races. My greatest complaint is that traditional terminology is rarely used which, as a teenager, I would have found insulting and why I often preferred to read books that are less pretty and more informative. It isn't necessary to condescend and by offering the traditional terms, the reader will be able to continue exploring ayurvedic practices long after she has outgrown this book. I hope that Goldstein will create a home for the traditional terminology somewhere on her website and that the publishers will be less size-ist in the future when they are choosing models for their books.
Posted by Satia at 6:51 AM No comments:

Ash by Malinda Lo is a luscious retelling of the Cinderella story, a traditional tale that has been re-told in so many ways one would imagine it nearly impossible to find something new to bring to the page. Lo does so with brilliance. Her descriptions are lavish without sounding pretentiously poetic. Aisling, the “Cinderella” of the story, first loses her mother, a woman connected with the old ways of healing and who invokes a belief in fairies in her daughter, and, shortly after her father remarries, loses her father as well. In all of this, the story is not that far a departure from the typical Cinderella. However, Aisling’s loss makes her feel a despair that goes so far as to call the fairies to her and she especially attracts the attention of one male, Sidhean. Not even the distraction of the King’s hunting party is enough to break the bond Ash has with her painful past.
Interwoven with fairy tales from Aisling’s own childhood, the story evolves on expected and surprising lines, balancing delicately and wonderfully between being embracing and departing from the traditional story. I’ve read many fairy-tale retellings, even a few that have converted the tale to something contemporaneous. Rarely have I discovered one that remained in a “once upon a time” so effectively and I can only praise Lo’s confidence and talent as a writer. I cannot say this strongly enough—I am looking forward, with great eagerness and enthusiasm—for Lo’s next young adult novel. Hers is a voice and vision that is much needed and greatly appreciated.
Posted by Satia at 6:33 AM No comments:

Bloodline: Five Stories by Ernest J Gaines is a collection of five short stories that all take place in the rural south, sometime after the Civil War but before Civil Rights. The first two stories are written from the point-of-view of a young boy; the third and fourth are written from the perspective of a young man and an older man while the final story is a merge of several characters sharing a single experience. "A Long Day in November" is about a boy whose mother is prepared to leave his father. The dialect takes some getting used to but it begins to have a rhythm quickly. I didn’t find this story very interesting, mostly because I thought most of it was a bit silly although I found the child completely charming. "The Sky is Gray" was my favorite story of the collection, about a mother taking her son to the dentist. The son is both strong and vulnerable and his mother, although stoic, clearly loves her son and wants nothing more than to raise him to be a man. The world that is revealed through the boy’s eyes is fascinating, revealing a disquiet within the community but also a compassion that can be found in odd places. "Three Men" is the root from which Gaines’s later novel, A Lesson Before Dying, clearly draws much fruit. A young man goes into jail where he is confronted by an older man, a brutal mentor who wants to warn the younger man about his possible future. The anger both men feel about their circumstances is palpable and righteous.
"Bloodline" is the titular story that also touches most closely to the worst of the plantation life. The implication is that all of the other stories, whether they occurred long after or shortly after the thirteenth amendment, are determined and even defined by the experience of slavery, that the repercussions are still rippling regardless of time and space. "Just Like a Tree" is the story that appealed to me the least. I don’t know if it was because of the constant shift in voice, different characters being given center stage, sharing their own stories one by one. I usually prefer reading novels because short stories do not allow me the time to truly lose myself in the characters or narrative so, when a short story shifts constantly from character to character, the connection I hope to experience is all the more difficult. In this case, it never happened. All together, this is perhaps the most cohesive collection of short stories I’ve read in a long time.
Posted by Satia at 6:27 AM No comments: