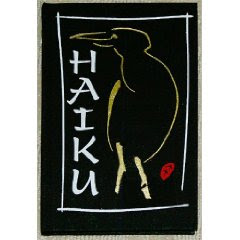 Haiku: Seasons of Japanese Poetry edited by Johanna Brownell is a collection of haiku and a few other poems (which Brownell calls “odes”) tucked in at the end. The haiku are organized thematically by season, which is apropos. Each page also has an image that does not change at all throughout the text, which is obviously not apropos. It is unfortunate given that in Asian artwork, the marriage of calligraphy with images was quite common and to not at least offer a new image for each season is a missed opportunity. There is little commend this book to any serious reader of poetry, let alone haiku. Brownell has abused the form so that nothing is sacred. The 5-7-5 syllables are flexibly interpreted, which would be understandable if she had honored the integrity of the content, sacrificing meter for imagery or metaphor. Instead, she uses archaic language (o’er, thus, ‘tis, etc.) and end rhymes to make haiku seem more traditionally European, I suppose. I can see no other excuse for abusing the poems in this manner, especially when she has the audacity to destroy syntax for the sake of an unnecessary end-rhyme given that haiku and Japanese poetry does not conform to any such necessity. It is painful to read such nonsense as: To keep the vows that lovers swear Of faithfulness and constancy Through life till death end worldly care, O’ertaketh human frailty, I trow. To-day I’d fain my spirit fled away. Anyone who loves poetry would find this book ridiculous. Anyone who loves haiku can’t help but find this book offensive to anything resembling artistic sensibility. This book is an affront to poetry, to haiku, to good taste. It’s only merit lies in that it lists many of the great haiku masters and may introduce the reader to some new names. However, I can only hope the reader will not actually read any of the haiku but will simply write down the names and go read anyone else’s translations because these are simply dreadful.
Posted by Satia at 6:25 AM No comments:

A Moveable Feast by Ernest Hemingway 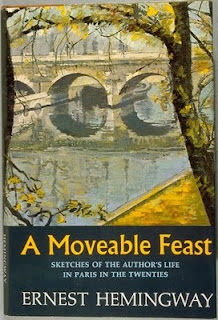 A Moveable Feast by Ernest Hemingway is one of those iconic books that one often feels ought to be read but few get around to actually reading. I wanted to read this book because I had enjoyed the few short stories I’d read by Hemingway when I was in college. I also had heard that his longer books were not as well written so I hesitated to read A Moveable Feast which is obviously not a short story. The final straw was the repeated assurance that Hemingway’s ability to describe the foods, the culture, the era in rich detail immersed the reader in experiencing Paris at time when many great literary figures were thriving in its environs. The book is not a novel nor is it a linear narrative of Hemingway’s life in Paris after the Great War; rather, it is a collection of loose memories, shared in Hemingway’s typically sparse language. I did not find myself slavering over luscious descriptions of meals eaten nor aching to hear the language or music of the streets. I didn’t even get a sense of the aromas nor the seasons that typically define a place and time. Instead of getting a feeling for Paris, what the reader is given is Hemingway’s feelings, mostly his feelings about other people. This is why the book, ultimately, reads more like a literary gossip column. Instead of reading about Paris Hilton or Lindsay Lohan or Jon and Kate one gets to hear about Gertrude Stein’s indomitable presence, Ezra Pounds’ compassion towards his fellow artists, and, of course, about F Scott Fitzgerald’s dissipated life and insecurities. Which would have been fine, had I read this book to hear about Evan Silverman’s addiction and how Zelda emasculates her husband personally and professionally. But I read this book to read about a Paris that no longer exists, not to find out that Hemingway has anything in common with Perez Hilton because, ultimately, Hemingway, much like Hilton (pick Paris or Perez), comes across like a pariah more than an artist, a narcissist who drops names to legitimize himself, who argues for his own talent by leeching off of and denigrating the talent of others. So it was not at all what I had hoped nor what I expected. It is, however, perfectly Hemingway in that the writing is tight. And it is interesting to read about Hemingway’s process as a writer. There can be no doubt that he labors over his writing the way few writers do. His commitment to his own craft is inspirational even if his style is sparse, something he himself recognizes when he uses the metaphor of a rabbit’s foot worn down to the bone and sinew. But one can’t help wondering at the obviously ugliness and disgust that such an object would inspire and ponder if Hemingway didn’t recognize some implication in his choice.
Posted by Satia at 11:29 AM No comments: 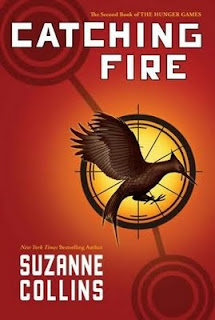 Catching Fire by Suzanne Collins is the sequel to the young adult novel, Hunger Games, which I read and really enjoyed. I approached this sequel with both dread and delight, hoping it would be as compelling to read as the first novel, knowing how often sequels do not live up to the first. It is difficult to write about a sequel without giving away details from the first novel and I will avoid doing so to the best of my ability. Collins takes her potentially derivative idea from the first novel and continues to develop it in new and exciting ways. She draws on the traditional heroic cycle as described by Joseph Campbell where a hero receives “the call” and then follows a path to which they never aspired, facing challenges and conquering their own fears with the help of others. In the first novel, Katniss is the hero who receives the call and the characters that surround her are often full of surprising depth, something that is often not the case with science-fiction or fantasy novels because the writer forgets to fully flesh out the supporting characters. Collins never overlooks the potential of her characters, whether major or minor. Those same characters who have survived the first novel and reappear in the second continue to surprise as they all grow in new ways. The dystopian world Collins has created, including the dynamic of the Hunger Games themselves, is fascinating and, I am so happy to say, as compelling as they are in the first book. Catching Fire adds a more political layer to the story, giving the readers a new way of immersing themselves into the lives and lifestyles of the characters. I will say that, while the first novel ends at a logical point, this sequel ends very abruptly. Too abruptly, in my opinion. Whereas the first novel clearly had more story to tell, a reader could easily set the series aside if they preferred not to go on, not unlike the Harry Potter books which each end with the school year but with an obvious potential for more story. I wish Collins had chosen to conclude this novel with the same grace and confidence as she did the former. Still, as with the first, I found myself getting teary eyed occasionally, shivering at some of the more emotional moments in the novel, and eager to read the next book. Unfortunately, I’ll have to wait for it to be released and waiting for the next and final volume of the trilogy will be torturous.
Posted by Satia at 6:10 AM No comments:

Leaping Poetry: An Idea with Poems and Translations chosen by Robert Bly is a curious collection of poems with contemplative essays by Bly in which he discusses association in poetry, focusing predominantly on Spanish poets. What is most remarkable about this book is how much meat there is included in so slender a volume. This book proves that good things do indeed come in small packages and that books should not be judged by their covers. I don’t know why there aren’t more books like this, that combine narrative forms to explore a single theme but I hope I can dig up some more treasures like this one. Normally I share a poem that I like from each book and the one I chose below is one that I like because I find it disturbing.

Conjugal by Russell Edson A man is bending his wife. He is bending her around something that she has bent herself around. She is around it, bent as he has bent her. He is convincing her. It is all so private between them. He bends her around the bedpost. No, he is bending her around the tripod of his camera. It is as if he teaches her to swim as if he teaches acrobatics as if he could form her into something wet that he delivers out of one life into another. And it is such a private thing the thing they do. He is forming her into the wallpaper he is smoothing her down into the flowers there and he is finding her nipples there and he is kissing her pubis. He is climbing into the wallpaper among the flowers his buttocks moves in and out of the wall.