The following review was written over a couple of weeks, each book being written about immediately after reading it--or at least within a 24 hour period. Two other books were finished and two others started during this same time frame. But it seemed to make sense to write a single review for this because I read it as a three-in-one volume. 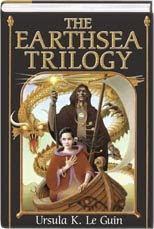 The Wizard of Earthsea by Ursula K Le Guin is the first of a trilogy that came highly recommended to me when I was younger and wanting to read more books like Lord of the Rings and Dune. I cannot say why it took me so long to get around to it. I remember once hearing that the books have a distinctly anti-Christian message, something I ignored as rumor; after all, many books that contain magic and/or wizards are called anti-Christian, even the Chronicles of Narnia. This first book of the trilogy reads very much like an epic legend. The tone is driven by narrative exposition with descriptions of events played out and little dialogue. What action there is, more often than not, is heavy with psychological meaning the way that fairy tales and mythology are meant to tell us about the human psyche and our own emotional truth. Oddly, I wonder if this book would have been published today if it were Le Guin’s first. I suspect not, which is a shame because this is a classic in fantasy literature for a reason. Because it was published in a climate starving for more books like Tolkien’s is a blessing. This is not merely a story but one that invites the reader to meditate on the experience of the protagonist and those characters who befriend him along his quest and much of this first book follows the Joseph Campbell heroic myth cycle: calling, training, etc. The final battle is not a surprise and yet delightful to anyone with appreciation of Jungian psychology. What Le Guin creates is meant to be epic, filled as it is with archetypes the reader will both recognize and want to know again. All in all, a highly gratifying read but, if you find the first couple of chapters tedious to read because of the tone, do not expect it to change for the rest of the novel. Either appreciate the style LeGuin offers or read something else. And yes, needless to say, I plan on reading the rest of the trilogy.
~*~
The Tomb of Atuan by Ursula K Le Guin is the second novel in the Earthsea trilogy. This second books tells the story alluded to and promised in the first book of the trilogy, focusing on a new culture within the Earthsea world. This time the protagonist is a young who is called into the life of a priestess, serving a dark collection of gods while struggling with the politics inherent in a community that has many gods, many priestesses, etc. Once again, the classic mythological themes are present as the priestess is called from her home and family, dies to who she was before, faces death by going into a figurative underworld. There is even a labyrinth in this novel. There are several confrontations which do not come as a surprise although there are certain climactic events that I had not anticipated. Often the second book in a trilogy lacks the luster of the previous novel, serving more as a means to bridge the first and final novels. However, The Tomb of Atuan stands up well in relation to the previous novel and can even stand on its own merit. Someone who hasn’t read the first book can still follow the story of this one although some of the more subtle allusions to the first novel’s story may be lost. Still, understanding the full meaning of the allusions is not necessary to fully appreciate this second book and I am eager to read the next and final novel in the series.
~*~
The Farthest Shore by Ursula Le Guin is the third and final novel in the Earthsea Trilogy. Once again, there is a quest undertaken and, unsurprisingly, the dangers are more compelling in their psychological implication. Although the stories are all predictable in how they follow the classic lines of the heroic story arch, the characters are interesting enough to keep the reader curious. Le Guin continues her exploration of Jungian archetypes without compromising the “reality” of the world she has created. I found some things about this trilogy very interesting. For one, I found some vague parallels between these books and the Harry Potter ones. Now, to say this is not at all surprising. Both authors draw on a deeply rooted tradition of story-telling and focus on the training and development of a wizard, even including a school where boys are trained to use their innate talents. However, there is enough difference in tone and plot, if not theme, to make these series as different from one another as Harry Potter is from Narnia. Le Guin’s style is closer to Tolkien than Rowling and this works wonderfully for me. I guess some other readers did not feel the same because I found “reviews” where people said that they lacked the imagination to visualize what Le Guin was describing. (I am still confused by this; is this statement meant to be a critique of the novel or a confession of personal inadequacy?) For the reader who likes a lot of dialogue and action, the Earthsea books will probably prove to be dissatisfying. If the reader feels that the strength of the Harry Potter books lies not in the action but in the emotional and psychological content then the Earthsea books will prove very gratifying. I said in my review of the first book that if you do not like the style or tone of the first few chapters you will not enjoy the rest of the book. The same can and should be said about the entire trilogy. Le Guin has written high-fantasy and not every reader will enjoy her style. I did and do and am eager to share this collection with others. First on my list: my son who enjoyed the Harry Potter books and may enjoy the similarities between the two series.
Posted by Satia at 4:47 PM No comments:

I’ve been remiss in keeping up with the comments lately, mostly because this summer completely had me burnt out. The dust finally started settling in September and now, over halfway through October, I’m finally feeling like I have the energy and strength to come out from under it all. It’s been a rough year. You can always tell where my heads at when I am reading a lot of fantasy because I tend to use fantasy novels as my pure escapist reading. I don’t read romance novels (unless I get suckered by someone else’s erroneous recommendation or don’t read between the lines of a well written blurb) nor mysteries (although I recently borrowed a book from the library that has a “mystery” sticker on it so I guess I bent that rule too). In any event, I have published more than a few comments and have a meme to catch up on. And maybe I’ll start posting something other than book reviews.
Posted by Satia at 7:03 AM No comments: 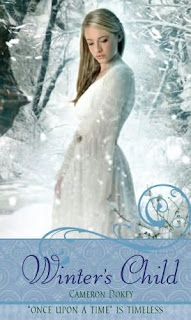 Winter’s Child by Cameron Dokey is part of the “Once Upon a Time is Timeless” series—a collection of fairy-tale retellings. This one by Dokey is a retelling of “The Snow Queen” by Hans Christian Andersen. The book begins with a typical fairy tale sounding exposition about how vanity led to the fragmentation of a family and created The Winter Child (née The Snow Queen) and her quest to heal all who have been touched by the curse her own father placed. Kai and Grace are also present, neighbors and best of friends. After the initial chapter the novel shifts into first person narratives, each of the major characters telling their part of the story. This literary effect is clearly used because the only way Dokey could tell all sides of the story without using third person was to shift from one person to another. Unfortunately, she doesn’t make much effort to give each character his or her own voice or tonal mannerisms. Instead, the three characters sound very much alike and Dokey uses chapter headings as an affectation to differentiate for the reader which of the three is talking. There are moments of poetry, occasional lines that are lovely to read. These are too far and few to add merit to the novel. Ultimately, this book reads like a Harlequin romance meets Hans Christian Andersen—a pleasant and completely provocative piece of fluff. Quickly read. Quickly forgotten. Unlike Malinda Lo’s Ash, a surprising and wonderful retelling of Cinderella, Winter’s Child takes few risks and never rises to the promise of a retelling making this reader question why bother retelling the story at all if it isn’t going to at least offer some surprise or contemporary merit?
Posted by Satia at 11:18 AM No comments: