The virus that attacked my computer has compromised the following accounts:
So far the only emails that are safe are comcast and gmail.  We still don't know if any of my writing is safe.  I'll update as access to the internet allows.  For those who have emailed me in the past, same user name for both the comcast and gmail accounts.

Also, we think I have mumps.  Not sure but it sure looks like mumps.  Rather mump because as of the writing of this post, it is only on one side of my face.
Posted by Satia at 3:53 PM 2 comments:

Email ThisBlogThis!Share to TwitterShare to FacebookShare to Pinterest
Labels: hacker

This morning I woke up and my computer would not boot up.  Crashed?  So we thought.  As it turns out, it looks like my computer has been hacked.  Several of my email accounts and network accounts have been compromised--passwords changed on me, etc.

All of my writing for the past four years may also be gone except what I have in my notebooks.  We'll see.  The computer is going to be taken to the Geek Squad tomorrow.

This is not the way a happy new year should begin.
Posted by Satia at 5:53 PM No comments: 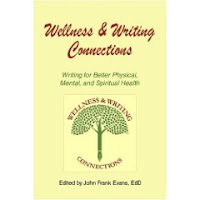 Wellness & Writing Connections: Writing for Better Physical, Mental, and Spiritual Health edited by John Frank Evans is a collection of essays exploring the different ways in which writing can be used to help facilitate a state of well-being. Starting with research from both James Pennebaker and recent Distinguished Professional Research Contributions to Applied Research award winner Luciano L’Abate, the book builds upon the foundation of established evidence to support the essays that follow, ones in which the various writers share from their own experience, occasionally offering exercises to reinforces the ideas in a practical manner. The editor has done a particularly effective job of bringing together information that will inspire further research in the ideas presented while also offering resources that the healthcare professional—whether a nurse, caretaker, counselor, psychologist, or psychiatrist—can use but without the overly technical language that would off-put the layman reader. In other words, anyone truly interested in how writing can help heal psychic wounds or ease the grief that come with loss or an unwelcome diagnosis, is bound to find something of merit in this book. The reader is invited, with each essay, to consider different ways of applying the research whether in journaling, memoir writing, or timed and guided writings, etc. I can’t imagine anyone with a sincere interest in this subject closing this book and not walking away with something inspirational and personally applicable. And although I could list the essays that especially touched me, I suspect that this is the sort of resource that upon revisiting (rereading) will result in new preferences. An excellent resource for anyone who has attending the Wellness & Writing Connections conference, who might be interested in attending, and/or is curious to know what the conference is trying to do within the wellness and writing community.
Posted by Satia at 6:40 AM No comments:

Mrs. Dalloway by Virginia Woolf is a lovely, eloquent day-in-the-life novel that reads almost like a meditation. The stream-of-consciousness interludes, moving from character to character as each encounters directly (or indirectly) one another. Underneath the slow and subtle plot is a sexual tension that I found surprising. The impetus for me to finally get around to reading this novel was a recent viewing of The Hours, a movie based on a novel by Michael Cunningham. I loved the novel. The movie did a wonderful job of translating the emotional content of the novel and Woolf’s Mrs. Dalloway is mentioned in both. How this novel informs the more modern one is quickly apparent as there are echoes of symbolism in both. To fully appreciate what Cunningham does in his novel, reading Mrs. Dalloway is absolutely a must. For those who have read other novels by Woolf and found them obtuse or difficult, this one may be more accessible. There are no chapter breaks although there are occasional double space gaps that allow the reader to pause, set aside the book, and return later. I found myself putting the book down many times just to allow the evocative quality of the prose to settle into me.
Posted by Satia at 6:31 AM No comments:

Wishin’ and Hopin’ by Wally Lamb

Wishin’ and Hopin’: A Christmas Story by Wally Lamb is one of those ubiquitous Christmas novels that seem to clutter the bookstore displays through December. Normally, I cringe from such things but a few years ago I surprisingly enjoyed one such novel and, since I truly adored Lamb’s I Know This Much is True, I thought I might actually enjoy this novel. For those readers who enjoy A Christmas Story, this novel will feel like that movie’s child, a later generation’s version of the holidays. Told through the crisply defined voice of Felix Funicello (an imaginary distant cousin of former Mouseketeer Annette Funicello), life in a Catholic school during the less idealistic 1960’s (post President Kennedy’s assassination) and in an Italian American Connecticut home unfolds in funny and blunt ways. Felix’ older sisters play a rather small, nearly meaningless role and one could argue that Lamb could have easily dropped one without compromising the content. There are cultural allusions made that touch on everything from the Cold War to music to fashion. The book is not meant to be anything but a bit of fluff to amuse the reader during the holidays and Lamb does a wonderful job of defining the narrator’s voice. One can easily imagine this novel being made into a movie although odds are it wouldn’t measure up to the novel’s quirky fun. With all this said, while I will never forget moments in I Know This Much is True, I highly doubt that a year from now I’ll remember much about this story because it didn’t affect me as thoroughly as did the previous novel’s narrative. But I didn’t expect much more than what I read and am tremendously grateful it didn’t live down to my worst expectations.
Posted by Satia at 8:03 AM No comments:

Why I Should Be Chosen to Blog About Yoga . . .

Yoga Journal is one of my favorite magazines and I’ve been reading it for several years. My latest issue announces that they have a blog contest and they are inviting their readers a chance to blog for them for six months. All one has to do is commit to posting 2-3 times a week about yoga. Needless to say, I am throwing my hat into the ring . . . or my mat into the yoga studio, as it were. We all know I would be the ideal candidate for this. Why?

1. I have already written about doing yoga on occasion and am obviously willing to share my experience with my yoga practice. I’ve even discussed taking my yoga practice deeper by reading books on yoga while continuing to explore the various yoga resources I have on hand. 2. I can easily post 2-3 times a week. Some of you may even recall a time when I would post 2-3 times a day although I no longer do that. The truth is, I like the idea of sharing more about my yoga practice because it is such an important part of my life. 3. Although it would seem a reason to not choose me, I feel the fact that I have vertigo actually makes me an ideal candidate. Someone who has the perfect excuse not to do yoga but finds creative ways to do it? Of course that’s a positive and not a negative. 4. I am not young, not super slender, not amazingly flexible. In other words, I struggle with some asanas, The very fact that I don’t allow the vertigo to keep me from doing yoga is a testimony to my commitment but when you add to it that I am going to be 48 this year and have a few pounds to lose my potential for being an inspiration to others increases exponentially. 5. Last but not least, either Marc or Rob could easily take photos and videos of my doing yoga. Now that Rob has helped me with my camera, there's no reason for me not to take full advantage of it. And I would guess that seeing how I cannot fold over in a cross legged position or do a lotus would be a source of encouragement. You are not alone in not getting the asana just so.

Anyway, I’m going to put myself forward as an ideal candidate to blog for Yoga Journal for six months. The application includes a request for a link to my blog. So here’s a chance for you to tell them why I should be chosen. Leave a comment. Sing my praises or make jokes at my expense (having a sense of humor can’t hurt my chances, right?). Hopefully, the people who make the decision will take into consideration my commitment to bring my yoga into all areas of my life and not just have it be something that fits on my mat.
Posted by Satia at 9:33 AM 1 comment: