The First Day of Spring

I spent today in the library, researching things while Rob did some things he had to do.

Once home I did 7 miles on the bike and made a few discoveries online (but you'll have to wait for Friday to find out what they are) and had an epiphany about myself. 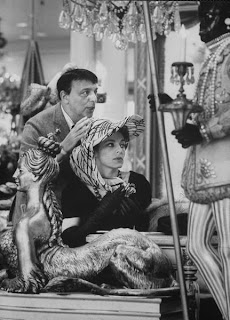 Salesman is demonstrating a spring hat in New York City.

Say hello to Rob’s new phone (because his other phone decided to throw itself to the ground and bounce a couple of times). 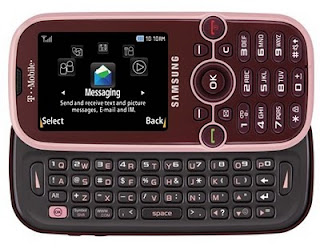 A lovely article about aging (albeit, I am a little uncomfortable with some of the judgmentalism in parts of it).
http://www.yogajournal.com/lifestyle/2017?print=1
And now zentangle has a blog as well as a newsletter.  Yay!
http://zentangle.blogspot.com/
Make your own Girl Scout cookies at home?  Sure.  Why not?
http://bakingbites.com/2009/01/homemade-girl-scout-cookie-recipes/
An important blog reminder, for those who have not yet filled out their census form.
http://www.freedomtomarry.org/blog/entry/make-your-family-count?source=20100317FamiliesCount&utm_source=Freedom%2BTo%20Marry%20Census&utm_medium=Email&utm_campaign=03/17/10
This article offers some interesting insight into mindfulness journaling. 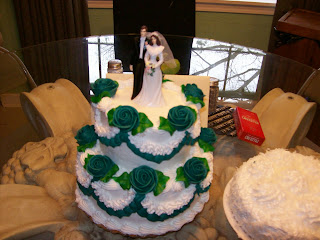 Here are the cakes.
The traditional wedding cake replete with bride & groom cake topper.
To the left is the groom's cake--a coconut one. 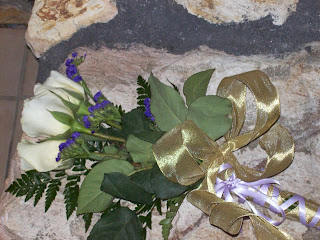 This bouquet was very last minute . . . three white roses with some purple flowers.
Bought at Walmart at the last minute.
Gold and purple ribbon added to make it look more like a "real" wedding bouquet. 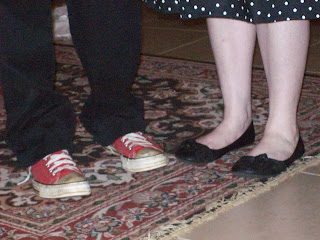 And yes, I took a picture of the happy couple's footwear because
it amuses me that Joe wore high tops to his wedding.
Red ones, no less! 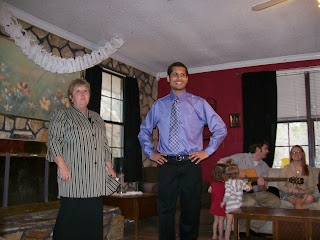 Waiting for the bride to enter the room. 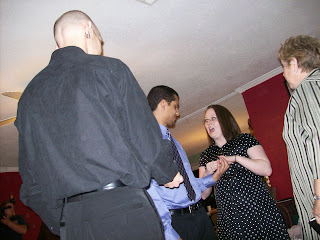 Rob was the best man and Erin's sister was the maid of honor. 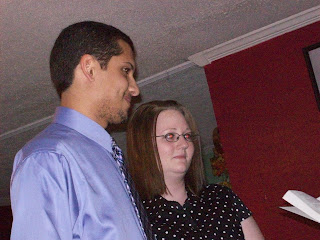 They were both smiling the entire time. 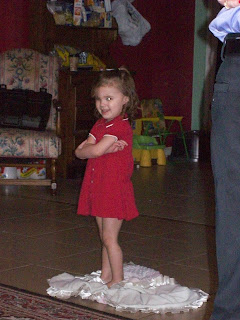 Although she looks like she is smiling in this picture,
Bibi was not smiling the entire time.  That's her angry stance. 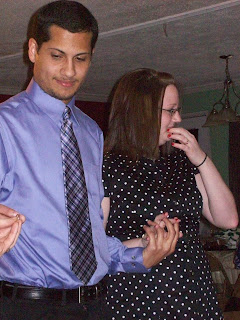 The taking of the rings. 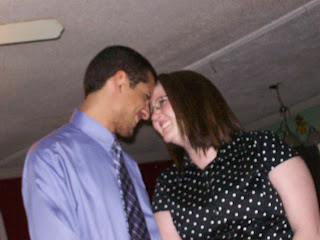 After the happy couple have kissed.
Even blurry they look so so so happy! 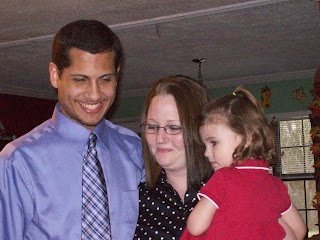 See?  The marriage is still a happy one.  Woohoo! 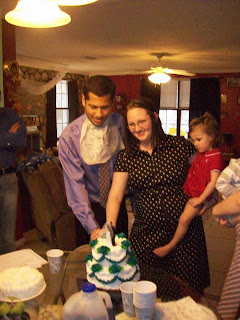 The cutting of the cake. 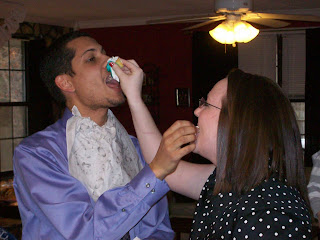 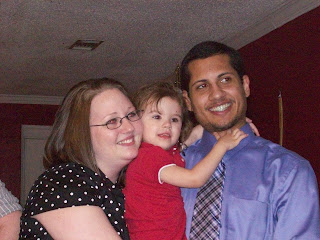 Cake up the nose may be the secret to a happy marriage.
See how happy they are? 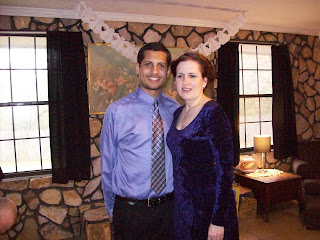 How hard is it to get a good picture of me? 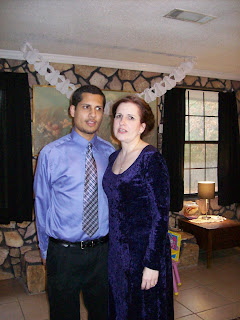 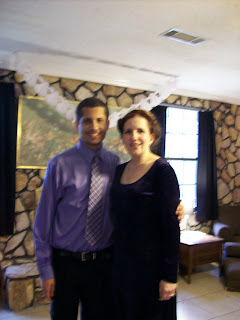 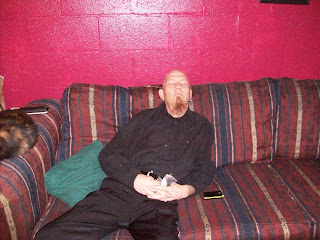 Bibi kept bringing Rob things and, at some point, he fell asleep.
He's holding the cake topper in his hands because Bibi had brought it to him.
I should have taken a picture of the gifts that were in the bag . . .
but I didn't because they made Joe blush.
In fact, the picture of Rob asleep and the ones of me and Joe were the last taken.
I found a bunch of pictures on my camera from when Rei borrowed it.
I really don't think I should see some of these images. 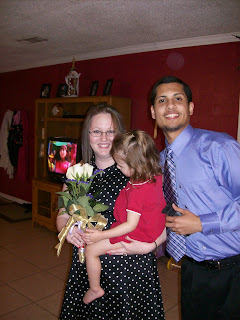 The oh so happy couple.
Congratulations Joe and Erin and Brianna.

My son is getting married today and since I won't have pics until tomorrow at the earliest, I figured I would post this instead.  An idea for a young adult novel tentatively titled Summer of My Discontent.  After all, who knows more about being discontent than an adolescent girl?
On the day I graduated from junior high school, I was kidnapped.
The ‘rents were fighting per usual.  Something about not being there for my graduation which I could care less because I don’t really want either of them there, sitting together but obviously miles apart, fake smiling as they hug me before shooting vicious looks at one another while I’m supposed to not notice.
Mom had to work.  Dad had to work.  Neither of them had the day off.  No big.  I’d go to the graduation, get it out of the way, and then have summer with my friends.
Except most of my friends were going to summer camps and I’d be home alone a lot.  Alone unless you count Dani, our housekeeper who had agreed to come in every day during the summer so she could make more money for books before going back to college.
Which was another thing they argued about all of the time because with Dani going back to college they had to find a new “girl” to come in to do the things other mothers manage to do without someone.  Or that’s what my dad said.  But then mom said that she made enough to pay for a housekeeper and he should just shut up and worry about his own affairs.
So maybe that morning they were arguing about Dani too.  I don’t know.  I only know that I got up, got dressed, and made my escape without having to bother saying a word to either of them.
I missed the bus and ended up having to walk to school which is not how I wanted to start the last day of my junior high school life.
Then again, I didn’t want to end it by being kidnapped either but that’s how it went.

Tweak:  Growing Up on Methamphetamines

by Nic Sheff is a memoir about the author’s drug addiction.  His downward spiral began early in life when, at the age of 11 he drank for the first time.  He was soon smoking marijuana daily and experimenting with the usual party drugs—acid, ecstasy, mushrooms.
But that is not where the memoir begins because when the reader first meets Sheff on the page he has been in recovery and sober for just over eighteen months and although he is thinking back to where it all began at the time the memoir begins he is in San Francisco and prepared to throw it all away all over again.  He’s looking to score some drugs—particularly crystal methamphetamine.
I had read Sheff’s father’s memoir

and found it heartbreaking and insightful.  This memoir is all the moreso because you really get into the powerlessness of addiction, even the arrogance of the recovering addict’s attitude that they don’t need help.  I was especially interested in Sheff’s struggle with the 12-steps and the spiritual aspects of the program.  But watching him move through recovery into another relapse is just so shattering.
Sheff manages to write with an honesty that never cries for sympathy nor seems to sensationalize how dangerous addiction can be.  When he gets into recovery, there is never any doubt that he is serious but there is always the fear that he will relapse again.  After all, this is where and how the memoir begins.  Don’t expect an easy answer.  When I finished this memoir I did a quick google to find out if he is or is not staying sober.
This memoir, alongside the father’s, works in a way that Burroughs’ Junkie never did for me.  I think it is more an issue of my knowing that drug addiction is not just a minority problem or a problem that uneducated people deal with.  Rather, addiction touches everyone, which was the point of Junky

but isn’t really driven home until reading the memoirs by David and Nic Sheff.  Together the perspective of addiction is painful and profound, full of desperation without ever falling into the trite or safe.  Both sides of the one story give an insight to addiction that will make it more understandable and sympathetic without justifying the behavior.  Neither writer is forgiving of himself nor of his actions and because both are very introspective the reader may not close the book liking the choices that are made but can’t help understanding more deeply the miracle of hope in the face of addiction.

What Should I Be Called?

In two days I become a grandmother.

But the question on the table is what should I be called?  Brianna has more than one grandmother already so I am just one of a crowd, at this point.

Grandma?  That's what my children call my mother.  And Bibi probably already calls her maternal grandmother grandma or will anyway.

Gram?  This always makes me think of drugs.  Or measurements.

Grandmomma?  I already know that won't last.  Same with Grandmother, although that sounds entirely too formal and "to the manor borne" for my taste.

Obassan is Japanese for Grandmother.  But I'm not Japanese.

Nonna is Italian for Grandmother.  I am mostly Italian or I self-identify as such.  (My mother is mostly Italian and since I know very little about my father's side of the family tree, I just lean on the most familiar side of things.  Like President Obama identifying himself as African-American although he's biracial.)

Babushka is Russian for Grandmother and Joe says he wants Brianna's second language to be Russian. Why?  Well, his reasoning makes no sense to me.  It would if I were going to be called Nai Nai (Chinese for Grandmother).

And then there's Gigi, which is usually used for Great Grandmother, but could work in my case since I default to calling her Bibi . . .

Oh dear.  What is she going to call my mother?  And what about Rob???

This becoming a grandmother thing is requiring too much thought on my part.