Edit:  Although this post receives more views week after week than practically any other post I make, nobody has left a comment to say hello, to introduce themselves.  So I am saying "Hello, my name is Satia and I'm happy you dropped by."

A few weeks ago I shared a collection of images for paper embroidery. Then I saw a book on paper architecture and I was so excited by it that I started looking online for kirigami and paper creations that . . . well, I think they are quite lovely and inspiring.

Hans Christian Andersen apparently was fond of cutting paper designs which often incorporated images of ballet dancers, swans, and skulls.  Just a bit of trivia for your day.

For the record, many of the sites from which I am copying these images (with the link immediately below) have many other beautiful examples so you really should visit these sites if you like what you see here. 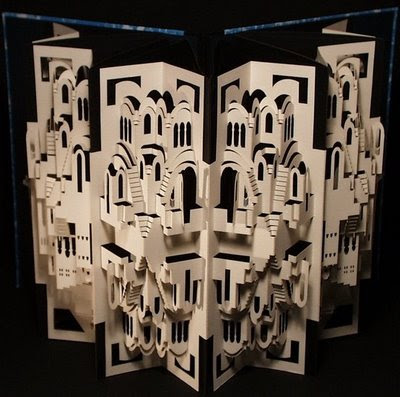 Brave New Girl by Louisa Luna is a coming-of-age novel, told in the first person, that deals with family secrets and a crush that leads to complications.  Told through the blunt voice of Doreen Severna, from the very first page the reader knows that this family is held together by circumstance rather than connection and that communicating, really talking things through, is simply not happening.  Doreen, herself, only has one friend, a boy named Ted, and has a crush on her sister’s boyfriend.  Told in two parts over a short period of time, the events that spiral the narrative to its conclusion are interesting even when they are predictable.

This is not the first book to encourage young people to speak out, to not hold secrets inside.  Speak

, by Laurie Hals Anderson, is another example of how essential it is to let the truth out and how secrets will eat you up alive.  And

I really wanted to like this book.  I certainly like the narrator, for the most part.  Her taste in music and her sense of isolation and marginalization are familiar.  She is interesting.  That is until she calls her friend “faggot.”  At that point, any hope for my praising this book cover-to-cover went out the window.

The thing is, I realize that this is perhaps an honest choice on the writer’s part, that young adults use the word in an insulting and derogatory manner to one another.  Is this a reason to perpetuate it?  Is being called homosexual really an insult?  Have we not moved beyond this?  And yes, it sounds true to the character but can’t the character say something else, use a different word, one that is not an insult to those readers who might actually be homosexual?

I don’t know when being called a faggot became an insult.  Probably long before my time.  I hope I live long enough for it to stop being used in this manner.  Maybe if young adult writers will reconsider using it in their writing we will begin to see some changes.  In the meantime, this is a pretty good book but I wouldn’t want impressionable minds to read it because I’m hoping someday homosexuality will not be considered fodder for insult. 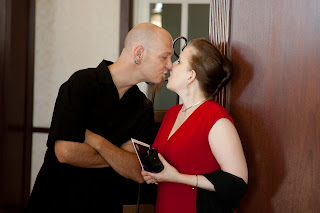 My guess is that I was talking and he decided to lean in and kiss me to shut me up.

This is the two of us at Kanika's wedding, in a blatantly public display of affection.

My Boys Are Too Old

Seriously, I'm too young to be the mother of children who are already past their first quarter life but . . . .

Twenty-six years ago today (around 5pm est this evening), I gave birth to Joe and Marc.  These pictures are taken from their facebook profiles.

Poetic Asides with Robert Lee Brewer - An Appeal to Poetry Editors
This is amusing and I simply had to share. For anyone who is a writer or who has submitted some form of personal creativity to some "higher power" who now will determine whether you deserve to be shared with the world or rejected outright . . . this is a silly bit of fun. But a good kind of silly fun.
(And since I am still coming down from the Wellness & Writing Connections Conference, I suppose I'm feeling writerly so the thought of rejection looms somewhere in the back of my mind.)
Posted by Satia at 7:36 AM No comments: