I recently watched a movie choreographed by Fosse which led to another and another and then to this post.

The picture quality is not the best but here's a scene from Kiss Me Kate; the shorter of the pair of guys, the one who dances with the girl in the salmon colored dress, is Bob Fosse. He choreographed the solo he and his partner (Carol Hainey) and it is brilliant. I didn't know this before but apparently this brought him to the attention of Broadway producers and the rest is history!

He first worked on The Pajama Game which, to be honest, has cute music but little else. But there's this wonderful number. The hats and the silhouettes created by the costume are pure Fosse, as you will soon see.

Gwen Verdon was Fosse's wife and muse for quite a while and you can really see this in "Whatever Lola Wants," from Damn Yankees, which begins at about 3:50.

Sweet Charity is, in my opinion, the first film that allowed Fosse's choreography to truly shine. (I tried to find Shirley McClaine's If They Could See Me Now but was unable to do so. Darn!) Still, see the silhouettes and how he allows the dancer's movements and body to take center stage?

When I first heard they were making a film version of Chicago I shuddered, thinking they would change too much. Whatever they else they may or may not have changed, they kept the look of Fosse's choreography and that's truly all that matters!

So few are familiar with Fosse's role as the snake in The Little Prince which is, in my opinion, a pure shame.

I knew at least one of these would have "embedding disabled" and here we are . . . Cabaret. Pure Fosse. Fosse. So brilliant, it hurts. And I can't even say what I wouldn't do for a dvd version of Sam Mendes' version Cabaret which Rob and I saw in a touring company starring Lea Thompson as Sally. (She was good. Seriously.) Anyway, I found a bits and pieces version with Alan Cumming as "the host" and it doesn't take long to see why this production is so brilliant. A far darker, even sinister, version. The tone is far more apropos to the story and the ending is chilling. If you have the time and inclination, watch the various parts in sequence.

http://www.youtube.com/watch?v=KW5eFCFnW9c
Posted by Satia at 12:00 PM No comments: 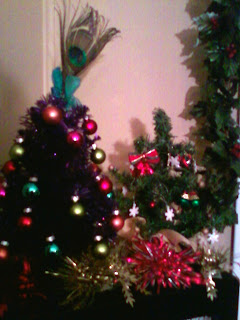 These are my trees and they make me happy.

The one on the left is a purple tree my daughter gave to me.  I put a peacock feather tip on the top as a tree topper and then added a rainbow of ornaments to it for fun.  It is my gypsy tree.  The one on the right is the tree I used to keep in my cubicle, upon which I would dangle my many pairs of holiday earrings.  (Look closely and you can see red and green jingle bells with bows and without.)  The white snowflakes are actually teeny tiny ornaments for my teeny tiny tree.

Beneath the tree are some gift decorations that I use to hide the base of the trees.  Quite effectively, if I do say so myself.

These tiny trees are just to my right where I can enjoy them during the holidays.  They make me happy.  So I simply had to share the happiness with you.
Posted by Satia at 8:29 AM 4 comments:

A Piece of Cake by Cupcake Brown


A Piece of Cake by Cupcake Brown is the harrowing story about a young girl’s experience losing her mother and trying to survive a system that simply didn’t care.  Her journey moves her through prostitution, joining a gang, drug usage, and more.  It is relentless and heartbreaking and ultimately numbing.

When Cupcake finds her mother dead one morning, the reader can’t help but feel a deep compassion for this poor child.  No young girl should survive the loss of a loving parent, let alone be the one to find her body.  Her heretofore absent father, a man she never knew, shows up long enough to find out that neither Cupcake nor her brother are going to inherit any money until they turn eighteen; this revelation results in the siblings being dumped into a foster care situation that introduces Cupcake to alcohol and rape.

Unfortunately, there is no love lost between the brother and sister leaving Cupcake to cope on her own.  She runs away from the abusive foster home situation, learns how to make money through prostituting herself because men, and women, are willing to pay extra for a younger prostitute.  She tries to return to the people she knew as family: her maternal uncle, a man who was the only father she had ever known, an aunt.  Every time the system would intervene and return her to the foster home.  Even when living with her aunt, she is introduced to gang life, is initiated into the neighborhood gang and eventually ends up in the hospital after being shot.

That she survives all of these things is a miracle.  Eventually, she emancipates herself and marries a man whose drug use and abuse nearly matches her own.  Throughout it all, she lies and manipulates her way to what little success she can experience.  She goes to school to learn how to be a legal secretary and pays someone in the administrative office to give her credit for successfully completing the course.  She lies on her resume repeatedly, saying she has worked longer at various offices, made more money, and moves from one position to another, always doing better professionally and financially but, because she is an addict and unable to control her self-destructive behaviors, these jobs ultimately end up with her being fired.  But since she is constantly given a two week’s notice, she is able to find another and better position.

Of course, you know the story has to have some positive conclusion because, although her life seems to be heading to an early demise, she is writing about her life.  We know she survives and presumably we want to know how.

Halfway through the book, I simply didn’t care.  At first I read the chapters slowly, so aggrieved for Cupcake and aching for her misery.  I even felt guilty for being able to close the book, able to walk away from her story, knowing that as a little girl she did not have that choice, that she could not close the book and walk away from being raped, beaten, deprived, abused, etc.  But somewhere near the middle point I was tired of it all.  She used drugs.  She denied she had a problem.  She lied.  She stole.  She cheated.  She still succeeded.  So much of the book focuses on her destruction and disease and so little of it on her healing and success, that it felt as though she were merely bleeding and vomiting and weeping on the page.  Three fourths of the book is about the worst of her life and then the last fourth rushes through her recovery, her return to school, her getting her life back in control.

Perhaps someone suggested to her that people don’t want to celebrate and rejoice.  It reminds one of the opening line in Anna Karenina

: Happy families are all alike; every unhappy family is unhappy in its own way.  Cupcake’s unhappy childhood and young adult experiences are exhausting to read and relentless in how heartbreaking they all are.  But so much time is spent on these painful parts and so little given to her recovery, it almost seems a disservice to her experience.  Given the redundancy of the experiences, an editor could have easily suggested she condense some of the stories, merge or remove chapters, or somehow communicate how painful it all was without our having to read yet again about her short skirts, her getting into a drunken fight, etc.  We get it; her life sucked.  It really sucked.  Okay.  But now it is so wonderful and deserves to be celebrated.  Too bad you won’t read about that with the same attention to detail.


Full Catastrophe Living: Using the Wisdom of Your body and Mind to Face Stress, Pain, and Illness by Jon Kabat-Zinn is a wonderful resource on mindfulness and how meditation can help on many levels, not solely the spiritual.  Drawing on his work with the Stress Reduction Clinic, Kabat-Zinn has come to realize that meditation and gentle yoga can help reduce the manifestations of stress–including anxiety, anger, etc.  It can also help those living with chronic conditions, including pain, to live in relationship with these circumstances rather than resist them.

The book begins almost immediately with practice, starting with breathing as a foundation for all that will follow.  Sharing the experiences of his workshop participants, the reader learns how simple things like seated and walking meditation, doing a guided body scan, and learning to reconnect with the body through yoga are beneficial.  The advice is practical and explains in detail the eight week workshop without suggesting that anything and everything can be cured.  A level of individual commitment is required but, by the book’s conclusion, it is apparent that the purpose of these practices is not to change so much as to accept.

For those living with an incurable, chronic condition, this can seem disappointing.  I prefer truth over empty promises.  It would be nice to discover that walking meditation and daily yoga, along with body scans and breathing practice, would relieve a patient from living with constant pain but there is so much hope implied in saying that even where there is no cure there is acceptance and that living within the incurable can be more bearable.

I borrowed this book several times, reading it slowly and then returning it because I needed to think about some of the content before moving on.  I want to own this book and have added it to my wish list. There is a cd set that includes the guided body scan and yoga practices Kabat-Zinn uses in the workshop.  I highly recommend these cds and, to anyone interested in truly committing to exploring the potential benefits of this text.  I can say that I have put into practice many of the suggestions and they have helped me tremendously.  I would love to hear from others what experiences they have had with the individual practices and how meditation has helped in living with a chronic condition.

Reiki Related Links and Video and such

Reiki as a Path Towards Healing - Tolland, CT Patch

In this article, the writer discusses Reiki not merely as a means of healing but as a way of life.

And this is a video that shows how Reiki can be done without actually touching the body.  This is important to know, especially for those who are sensitive to being touched.