On the 14th, Rob's family came for a visit.  Rob had hoped to go up to Kentucky for a visit for Thanksgiving but that didn't happen and then his family was supposed to come down in December but they postponed it and then finally they were here!  His brother, Shawn, Shawn's wife, Veronica, and their daughter, Isabelle along with Rob's mother.

My in-laws.  Eep!  I never had to deal with in-laws before.  No really.  And now I have in-laws and I am an in-law and I'm in it all around.

Rei and Marc were here for the arrival and we ordered pizza for dinner.  Quite yummy.  Isabelle had never met me so she and I were bonding.  It was pretty easy since she likes stuffed animals and books.  I mean, really . . . how could I not like her?

We exchanged some holiday gifts, nothing major, and then Shawn and his troop went to stay at a friend's place while my mother-in-law stayed here.  We watched a dvd

(you can read the review for it at the end of the month on my other blog) and then went to bed, very very late for me.

Saturday Rob made his mother and me some omelets and then we headed to a used bookstore.  In the meantime, Veronica took Isabelle to the American Girls store while Shawn tagged along.  We hoped that they would join us later for dinner and were not making any plans past our store hopping.  We also took his mother to World Market where I bought some bangles for the girls and some spice jars for myself.  Oh and of course, I bought books at the used bookstore--one by Jeanette Winterson

and another by Pema Chodron

Veronica wanted to spend time with her friends, understandably, and so they didn't come by the house at all.  This was a disappointment to Rob but would prove to be the lesser of the disappointments by the weekend's end.  We had swordfish for dinner and watched another movie

before heading off to bed very late yet again. 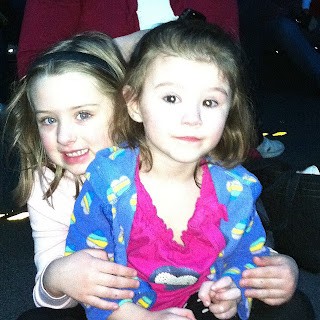 Sunday morning we had blueberry scones for breakfast and Rob announced he was sick.  He hoped to feel better by the time the rest of the family arrived--Shawn, Veronica, Isabelle, Joe, Erin, and Bibi.  The plan for Sunday was for everyone to go to the aquarium; everyone, that is, except me.  So the hope was Rob would feel better because he really hadn't had much time with his family at all, at this point, except for his mother.

That didn't happen.  He was still quite sick and I debated going to the aquarium but the truth is I knew I wouldn't have a good time worrying about him here, sick in bed.  I wish I could have over-ridden my personal anxiety for him but I sent them on their way without me and without Rob.

It looks like Is and Bibi got along well, don't you think?  And apparently they had fun seeing the penguins and a highly amorous beluga whale.  Joe and Erin brought me home a gift--a beluga whale ornament.  You can't tell from the picture but it's sparkly and has Swarovski crystals on its flippers.  You can clearly tell that it is not, however, amorous.  Thankfully!

When they all came back to the house, Joe and Erin didn't stick around. Bibi was asleep in the car so they gave me my gift and left (forgetting Bibi's purple metallic piggy bank!) and it was decided that Rob's mother would not stay another night here.  Assuming Rob would feel better by the morning, we figured we would all get together for breakfast close to where they were staying and then send them on their way.

Rob was still too sick the next morning but what he didn't know is that late Sunday night I'd received a call from his mother checking up on him and explaining that they'd decided to drive home that night because of some weather complications up north, etc.  I told Rob later on Monday, most of which was spent with his throwing up and my saying he needed to go to the hospital.

Of course, by now you know all about Rob's having an appendectomy and how the rest of last week went.  But that was a week ago today when Rob finally went to the hospital and the whole time, when he was strong enough to feel anything and not so doped up he couldn't feel anything, he shared his disappointment in how things turned out.  He had been looking forward to seeing his family for months and to have it cut short like that, to see his brother only for a few hours on Friday and then only a few more moments on Sunday . . . well, that isn't what Rob had in mind at all for the weekend.

And this post almost wasn't because I had planned on writing all about the visit very shortly after the visit which means this should have been blogged early last week.  Oops.  Oh well.  Life goes on and I finally got around to writing this blog post.