It is another gray and gloomy day here and the lovely sound of the rain is like an invitation to stay in bed and read a good book.  Then I walked into the room and saw the holiday lights dangling from our eaves and smiled because if it were not gloomy, I would not have seen them sparkling as they are against the holly tree outside the window.  This is the same holly tree that attracts the birds and squirrels that are a constant and delightful distraction as I write.

I apologize for the poor quality of this photograph taken through a window screen.  It was the best I could do. 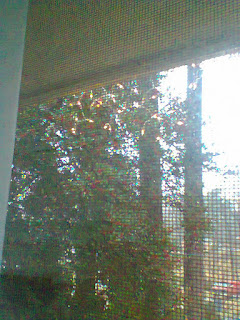 21-Day Challenge - Yoga Journal:
This ties in beautifully with my intention to explore Hinduism beginning in January.
Now if only I could get google to stop making changes that trigger my vertigo, life would be perfect. Or pretty darn near perfect. 'via Blog this'
Posted by Satia at 9:44 PM No comments:

Edit:  Never mind.  Apparently nothing works and once you've followed a blog you'll follow it forever and ever.  Even if it's been deleted and no longer exists, you'll still follow it apparently into some sort of blogger hell.

So the secret to unfollowing a blog in blogger is to use Internet Explorer.  It's really that simple.

One would think it would be just as simple to do it in Firefox but not so much.

One would think it would be easiest in Chrome (what with both services--Chrome and Blogger--being Google-based services) but no, such is not the case.

My love affair with Google is now over.  I'm not getting a divorce . . . but I am no longer as blissfully happy as before.  In other words, dear Google, the honeymoon is over and you can cook your own damn dinner and fold your own damn laundry.
Posted by Satia at 5:43 PM 4 comments: