Rob and I were talking about inviting some friends over who have little children, with the idea of also inviting Bibi over.

Me:  It'd probably be good to have as many adults here as possible because we're not exactly the most kid friendly house. (*)
Rob:  Sure we are.  We have a kennel.

Romanov Had a Seizure

Romanov had another seizure today.  It was the worst one yet.  We'll be taking him to the vet as soon as possible.  In the meantime, I haven't had a drink since the new year and boy do I want to have a glass of wine with dinner tonight.  Instead, I think I'll lose myself in a book.  I believe I have one or over 30 lying around here somewhere. 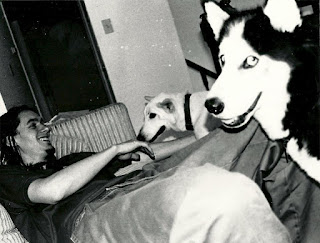 I Don't Care What You Say, It Never Happened


It was a big week for me and mine.

On Monday, of course, my son adopted his step-daughter legally and officially making me a grandmother.  Of course, I’m already emotionally attached to her.  She is my grand-daughter and has been since even before my son officially married her mother.

So what would you do if you had just adopted a 4-year-old child?

ROAD TRIP!  Or, as Rob apparently (pun!) explained, Family Vacation.  That’s right.  Joe & Co drove from Georgia to Pennsylvania.  And this picture comes from a side-trip they took to visit my mother’s.  I’m hugely grateful that this was able to happen because there are things happening “behind the scenes” that could easily have precluded the two of them driving out to New Jersey.  The photographs Joe took and shared brought me tremendous joy and make me all the more eager for my own trip north in June.

My week was dominated with my getting back into the swing of studying. I have four months to complete an online course.  Then I get to take another big certification exam.  Oh joy.

In other news, we were blind-sided with financial surprises.  Income tax wasn’t as high as we had anticipated.  Then a bill came in that was a lot higher (over three times so) than it should have been.  But then I received an unexpected payment for some work I’d done which was immediately followed by some more bad financial news.

Seriously.  Our financial week was a bit of a roller-coasted and I pretty much just filed things away and shrugged my shoulders.  There’s only so much a person can do and I had to study. 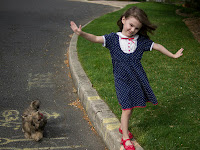 Lucky for Snowdoll, I do not study before going to bed because my textbook is a lot bigger and heavier than my kindle.  I have a tendency of dropping books out of the bed or knocking them from the bedside table.  Clearly, this is not intentional on my part.  But pity the poor puppy who dares to sleep on my side of the bed  On the floor.  Beneath where sundry books may fall.

Rob accuses me of throwing books at the puppies.  I have defended myself as merely clumsy but he still cautions the dogs, “Be careful or she’ll throw a book at you just when you think you’re safe and comfortable.”  (Let me interject that he is correct in that, for whatever reason, I do manage not to do these things when the dog has not yet fully lied down but only seem to manage to drop the book in question when, and only after, they have curled up into a puppy puddle.)

So the other night, I was in bed reading away as usual and I dropped (I did not throw!) what I was reading on Snowdoll.  Oops.  In the morning, I told Rob the following story:

You know how you say I throw books at Romanov because I occasionally knock them off the bedside table or they fall off the bed?  Well, yesterday I dropped over 20 books on Snowdoll and you know what she did?  She rolled over so I could rub her belly.  So ha!  Clearly the puppies don’t care.

The kindle is a lot lighter than most of my books and it didn’t even hit her.  Whew!

I now have over 30 books on my kindle.  You’ll see reviews coming up on my book reviews blog.  Oh boy. I can feel your excitement and enthusiasm from here.  I’ve also decided to tuck graphic novel and comic reviews on weekends.  That makes sense to me because I tend to read them in random moments of my life and there is little consistency on when they will show up on my blog.  If that isn’t enough for you, I’m conducting a personal experiment and you will see that pop up right here in my blog on Saturday, after I have already curled up in bed and have either fallen asleep or dropped a book on Snowdoll (or over 30 books, as the case may be).

Upcoming this week:  A 5k walk on Saturday.  Woohoo!  And studying.  Lots and lots of studying.  And a doctor’s appointment.  Maybe even a trip to my cellphone carrier to see what changes can be made and should be made to my plan.  It doesn’t sound like much but it will be a full week.

Oh, and my son Marc started a new job this week.  In this photo, he's saying "You are awesome."  Given the current job market, forgive me if I think he is awesome.  Yay, Marc!