Monday morning, we woke up with a mission. You see, Rob and I had forgotten his jacket and cap. We also forgot my jacket but, unlike Rob, I had also packed a sweater as well as a couple of long sleeved shirts.  In other words, I was prepared to layer and Rob wasn't quite as prepared as I.  As a result, we spent our first day in NYC doing something I loathe doing: shopping.

First, we tried to stay local and attacked several nearby stores including a goodwill, Loehman's, and more.  But we found nothing and returned to the room to plan out the next attempt at shopping which included our taking the subway.  Ugh.


First we had to buy passes to take the public transportation and two cards purchased quickly had us on the subway down to 34th street.  We took the 1 from the 79th street station down to the Penn Station stop where the day of torture shopping began.  I swear we stopped in every store that seemed to offer something of interest.  Rob couldn't just grab any cap to cover his head nor could he grab just any jacket.  He has a certain style and this made finding things for him a challenge.

While we were shopping, I kept thinking about our itinerary and how we were missing out on our first day of sight seeing.  It wasn't a total loss.  Rob got to see Macy's on Herald Square, the one that is the end point of the famous Macy's Thanksgiving Day Parade.  And there he was able to see the oldest escalator in NYC which, sad to say, was modified somewhat.


When I was a child, the "steps" were also made of wood but, in the 1990s, they were retrograded.  The rest, however, remains the same.  (You can see a pic of how they used to look here.)  Rob was impressed enough to take a photo.  Obviously.

When we reached the neighborhood again, we grabbed a bite to eat at this diner that clearly fancies itself a café but I ordered a pizza burger and you can't fool me.  You can't buy a pizza burger at a café.  It was delicious.  It was also a bit heavy and I probably should have chosen something lighter.  I wish I could blame the food on why I ended up taking an unplanned nap but, let's face it, I'd had a long day the day before and spent the next day running around trying to find the perfect cap and jacket.  Naturally, I was tired enough for a nap.  But I still shouldn't have chosen such a heavy food for lunch. 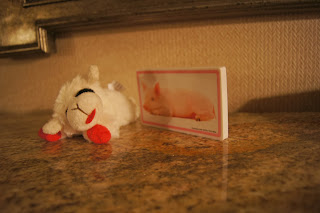 Why should I have chosen something lighter?  We had plans to have dinner with my mother, my step-father, my step-sister, and my step-brother-in-law.  That's a mouthful.  Let's just say my mother, Larry, Janice, and Bill.  I had a gift for Lizzie, my mother's shih-tzu, and one for my mother herself--a great big pig eraser.  And we met them at Scaletta's Ristorante.  Rob ordered a veal parmigiana while I had Ravioli di Formaggio alla Scaletta.  It was delicious.  And dessert.  Oh a chocolate and pecan cake that was amazing!

Hugs hugs hugs all around with plans for more time together with everyone.  The remarkable thing is that Rob made a huge concession during the trip, one that would otherwise go unnoticed, probably.  I cannot let that happen. Notice in the number of earrings Rob has in his ears in one of the photos in this post over here.  Larry is very uncomfortable with piercings and tattoos.  And when I say "very" I really mean Very.  In fact, I really really mean Very Uncomfortable.

Now, let me explain that Rob doesn't take out his earrings for anyone.  Not for his brother on is wedding day.  Not for anyone that I know of ever.  Never ever.  However, he understood Larry's aversion and he actually took out two of his earrings.  Why didn't he just go ahead and take them all out?  As he explained it to me, he wanted to show respect for Larry while also remaining true to himself.

I was floored.  It is so easy to get stubborn in situations like these, to demand self expression over compromise.  And nobody would have judged Rob if had chosen to remove none of the earrings.  Which is why I wanted to share this story because I forget how wise and honest Rob can be.  Then he does something like this and I am beautifully reminded.  Sure, starting off our honeymoon with food poisoning wasn't great and shopping all day on our first full day in NYC wasn't my ideal way to spend the day but the dinner was lovely.  There was clearly a shift in how the rest of our trip would go beginning this evening and things definitely were better the next day.  We even got back on track with our itinerary!
Posted by Satia at 5:00 AM