On our one and only Sunday in New York, we quite appropriately headed off to the Cloisters with all of its Medieval art.  It is a bit of a trek, especially when we don't pay heed to the advice to catch the bus if you take the subway.  Surely we can walk the one mile to the museum, right?

Well, now Rob knows Manhattan has hills.  Steep hills.  One hill so steep we had to climb up stairs.  I could have warned him and avoided the whole thing only I had never been to the Cloisters before.  Lesson learned.  Take the bus.

We took a lot of photos but I won't bore you with the redundancy of Medieval artwork.  However, here are two in particular I have to share.  St. Bridget of Antioch and a beautifully illuminated book. 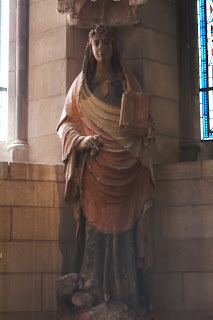 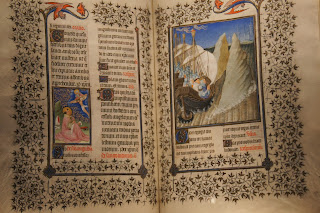 Trust me when I say there will be a link to the full spectrum of the way too many photos we both took which would have been many more if I had remembered to 1) bring the camera I had with me and/or 2) charged the camera's battery the night before.


We had lunch at the museum which was pretty crowded because of the exact exhibit I wanted Rob to see so much.  He told me the "set up" was really pretty "basic" and, although he thought it was a very interesting idea, it wasn't as impressive to him as it was to me.  We did, however, go to the gift shop in hopes of buying the cd of the piece featured in the exhibit.  Unfortunately, they were sold out.  Typical.

We took a bus back to the hotel but we didn't go back to our room because there was a flea market not far from the hotel.  I was pretty excited.  Why?  The flea market was at my old junior high, IS 44, which is now a charter school or something. 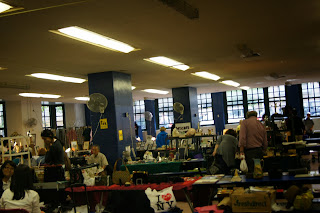 I was even more excited when I realized that part of the flea market took place inside our old cafeteria.  The cafeteria tables spread out with all sorts of irresistible things which I resisted.  Don't ask me how.  I was searching for gifts for others, not myself. 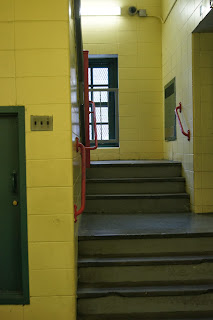 On our way back outside, I slipped my camera through a cracked open but chained shut door to the stairwell.  This is one I avoided when I went to school here.  The narrower ones were not the preferred choice when going between classes but that's another story for another blog post.


The flea market was huge and, as we continued exploring after buying some spices for our landlords, Rob was thrilled to see the Naked Cowboy.  What were the odds?  Well, if you're Rob, the odds are pretty damn good.  He simplyhad to take a photo of him and people were getting his autograph.  Weird.

We headed back to the hotel and decided to give another pizza place a try.  This time we tried Coppola's which was across the street.  It was good but we both thought the sauce was too sweet.  How exhausted was I?  I told Rob to just go ahead and watch some football.  Yes, even on though it was our honeymoon I was still getting up ridiculously early and going to bed understandably early.