Our first and only Saturday in New York, we decided to be real tourists.  We picked a great day to do it too!  The weather was wonderful and with the San Gennaro Festival a mere street-crossing away from Chinatown, why not, right?


Rob liked some of the older stations we passed through on our several subway sojourns.  If we hadn't had so many other things planned, he might have traveled every line, taking photos of different stations.

We headed to Chinatown in search of gifts, of good food, of distractions.  I really wanted some steamed dumplings and we had hoped to buy some special spices for our landlords.  But other than that, we just trusted we'd find something inspired in some small store.  At least, that was our hope.


We wandered into the San Gennaro Festival briefly.  As you can see, it wasn't especially crowded because we were there early.  Early or not, the aromas from the various food stands were a sore temptation.  We finally found a gift on which we could both agree, a rosary for Rob's mother.


This was the first building Rob found photo worthy when we turned towards Chinatown after emerging from the subway.  At the time I thought to myself, "Okay.  I have to come up with some amusing observation to make about this photo for when I blog about this."  I clearly didn't think of anything amusing.  But look, pretty architecture.


He also took a photo of this Betty Boop.  Shawn, my brother-in-law, likes Betty Boop.  Rob was enamored with the life-sized things all over New York.  I'm surprised we didn't end up with more photos of these things.

In Chinatown, we found gifts for Bibi, for Isabelle, and for Fokes.  Finally!  I even picked up a simple fan for Janice and a fancier one for myself. 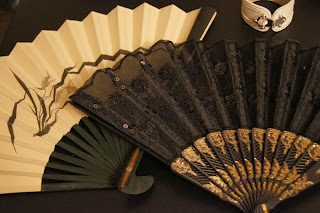 We had lunch at a place that had Anthony Bourdain chomping down on a lamb burger or something.  Remember how I said Rob ate a lot of lamb on this trip?  Yeah.  He did.  I chose sesame noodles which was perfectly spicy and I was glad I had a fan on hand to use to cool myself off.

Then I made the mistake of asking Rob if he wanted to see the Statue of Liberty.  Next thing I know, we were off to Battery Park, taking the subway down to the Staten Island Ferry.


Okay.  I have to agree with Rob's determination to get a photo of this one because the tile in this subway is really gorgeous.


Ellis Island was closed but we were able to go to where the Statue of Liberty was and Rob took a lot of photos.  I suffered the ferry ride over with as much grace as I could muster.  The water wasn't even remarkably rough but it was bad enough for me to know that I'll probably never enjoy taking a ferry again in my life!


But seeing a pretty boat like this . . . so worth the misery.  Rob kept calling it a pirate ship and I kept assuring him that there are no pirate ships on the Hudson anymore because they all moved to Wall Street.


I probably should confess here and now that I love seagulls.  They are one of the few things I like about the seashore.  I realize that they aren't the nicest birds but they make me smile and I love how they can catch a breeze and just hover.  So Rob took a picture of this seagull for me.


Look.  He even took a selfie of us.  It was very windy on the island.  We eventually went back to Manhattan and headed back to our hotel.  A quick change of clothes and we went out to dinner.  In spite of our lousy room service experience, we went to Nice Matin.  Rob had more lamb.  I'm telling you, he did his best to eat All of The Lamb!  I had an amazing pumpkin risotto, duck, and a panna cotta with lemon curd and blackberries.  The lemon curd was no better than the sugar free version we make ourselves.  I really need to stop ordering food we can make and make just as good if not better.  And Rob ordered a tart aux pommes.  Look at his dessert and mine and you'll see why I say the best thing about the end of my meal was my cup of coffee.