Finally, on our one and only Friday in NYC, we headed to the Metropolitan Museum of Art.  Had we gone nowhere else our entire trip, this one museum visit would have sufficed.  I spent many hours at this museum and it is, without a doubt, my place of choice whenever I go to the city.

I was feeling better although in my purse was all the evidence of how I was still not 100% well.  Between the Dayquil, the packets of tissues, and the vitamin C lozenges, I was definitely fighting my way through the day ahead.  In spite of this, we walked through Central Park rather than bother with public transportation.  It is only a little over a one mile walk so not that big a deal.  (Is it any wonder that we clocked 10 miles or more a day when we were out and about?) 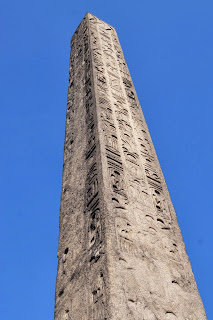 We didn't slow down too much to explore the park because we had plans to spend a day walking through it but when we saw Cleopatra's Needle, we had to take some pictures.  It was a great segue, really, from the real world to the ancient one on display at the museum. 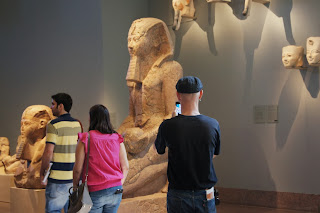 I am so very familiar with the museum that I knew how we would go from one are to the next.  Once we paid our admission, we headed straight to the Egyptian section.  I knew this would be Rob's favorite part of the entire museum, or at least in the top of three of best parts of the Metropolitan Museum of Art. 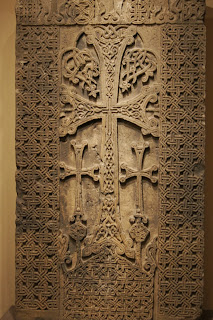 We also went to the Medieval area, although we didn't spend a great deal of time there due to our knowing we had other plans yet to fulfill and would be seeing a lot of artwork from that period soon enough. 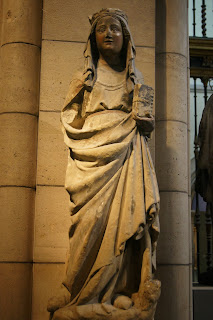 Knowing this didn't stop me from showing Rob my favorite saint statue in this wing:  St. Bridget of Antioch.  I fell in love with her when I was quite young.  Why?  She's holding a book.  Seriously.  That was the reason.  None of the other women in the room had a book in her hand.  Most of the others were holding a baby (because every other statue is of the Virgin Mary, or so it seems, holding the infant Christ or in full Pieta mode). 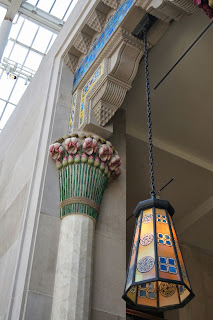 We went to the American Wing where I noticed the capital of these columns for the first time.  (I also noticed the caryatids at Macy's for the first time on this trip so I seemed to be focused on columns a lot throughout our trip.)  There are four in the archway and each has different flowers on the top.  (Aren't you glad I didn't share all four?  I took photos of all four.)


We had lunch at the Petrie Court Café.  Because neither Rob nor I had ever had a lava cake, we both ordered the same dessert.  His was, unfortunately, slightly overcooked but it was still tasty.  Not nearly as mind-blowing as our dessert at Sara Beth's had been and somewhat more creepy because I have to say that the drizzles of raspberry look rather like creepy aliens or ocean creatures about to suck the life's blood out of the next closest mammal and, from where I was sitting there, I was the nearest mammal around.

We went through the European statues, continued on into the Arms and Armory, and meandered through the Asian wing.  My camera had died by this time so Rob took all of the photos for me in these areas.  Mostly he took photos of things that appealed to him and I pointed out a few things I would like him to capture for me.

At one point, Rob went to explore without me while I explored the gift shop but everything I found was not unique enough for him.  I think he felt if we could buy it on amazon.com, it wasn't worthy of buying.  We took pictures of a few of the things we can easily buy on amazon and that was that.

In the newspaper a couple of days before, I had seen that Christiane Noll would be doing a cd signing at a local Barnes & Noble.  Before I'd even met Rob, I had picked up a cd of hers on a whim.  I'd never heard of her but I liked the premise of the cd itself, a collection of Broadway songs that, when put together, tell a love story from beginning to end.  I played the cd so often that I had every breath of it memorized.  Besides, the bookstore was not too far from the Papaya King where my mother and I used to get her favorite hot dog and we simply had to have a good New York hot dog.

Imagine my surprise when the cd signing was more than that.  Noll and two other Broadway singers were there to perform a few songs from Closer Than Ever.  How often can one see three professional performers sing songs for free?  Okay, we bought the cd so I could get her to sign it but there were just as many people there to enjoy the performance, who either had already bought the cd or didn't have one to have signed at all.  Just wanted to hear some great songs being wonderfully sung.

It was late and had been a full day so we grabbed four hot dogs from Papaya King and headed back to the hotel where we ate and relaxed before yours truly headed off to bed.  Give me a break.  It had been a looong day and we had another one planned for the next day.